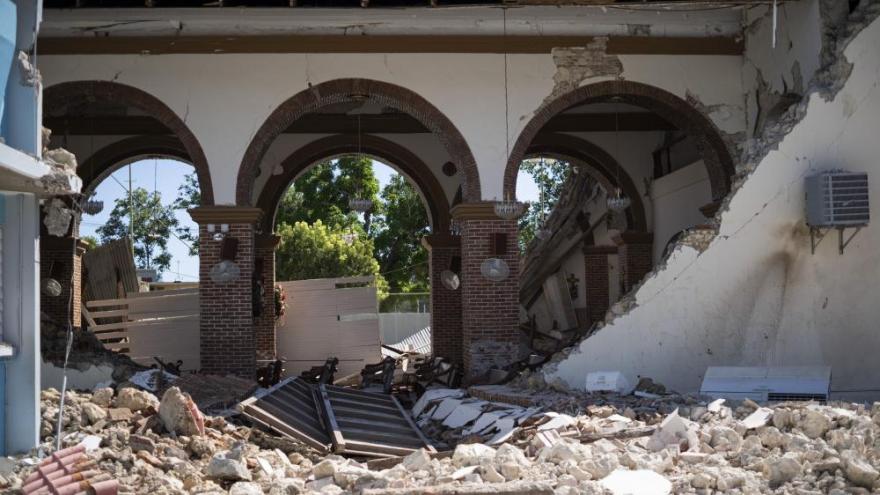 Health and Human Services Secretary Alex Azar has declared a public health emergency in Puerto Rico in response to the earthquakes.

(CNN) -- Power is expected to be slowly restored to all homes in Puerto Rico over the coming days in the aftermath of a 6.4 magnitude earthquake that left many residents sleeping outside their homes and more than 2,000 others in shelters.

The strongest and likely most damaging of hundreds of temblors that have struck the island since December 28 hit before dawn Tuesday. It left one man dead and caused dozens of homes and other structures to crumble.

With three major power plants expected to return to service between Thursday and Saturday, Puerto Rico Electric Energy Authority CEO Jose Ortiz said the entire US territory -- with about 3 million residents -- could have power by the weekend. A fourth plant could begin operating by Sunday, he said.

"The target is for Saturday to have everybody with power," Ortiz told CNN Thursday.

Power has now been restored to about 700,000 of Puerto Rico's 1.4 million utility customers across the island, according to Ortiz.

For many Puerto Ricans still rebuilding after 2017's Hurricane Maria claimed thousands of lives and left much of the island in the dark for months, the uncertainly following the latest disaster recalls the post-storm trauma.

Health and Human Services Secretary Alex Azar has declared a public health emergency in Puerto Rico in response to the earthquakes.

"We are concerned about potential impacts of this week's earthquakes on the lives of our fellow citizens in Puerto Rico. Across HHS, we have worked closely with the territory's health and human services authorities on disaster recovery and will continue to do everything we can to help ensure the health and well-being of people across the island," he said.

Tuesday's earthquake was centered off Puerto Rico's southern coast, six miles south of Indios. Terrified of sleeping indoors as aftershocks continue, neighbors put mattresses in their front yards while others spent the night under white tents and tarps.

Noelia de Jesus has been sleeping at an outdoors shelter with her granddaughters, terrified of returning to her home in Guanica.

It's the third time that a natural disaster leaves her without a place to live. Like her, many Puerto Ricans lost their homes when Hurricane Maria hit and Hurricane George struck in 1998.

The Puerto Rico Department of Housing said 2,204 people have sought refuge in 18 shelters.

Worse than Maria, some say

Residents and officials have repeatedly said the impact from the quakes surpasses the devastation that Hurricane Maria, a Category 4 storm when it hit the island, delivered two years ago.

"With the hurricane, you knew when and at what time it would arrive," Guayanilla resident Tatiana Rodriguez, 28, said, adding of the quakes, "This, you don't know at what time it's going to happen."

The town of 18,000 located near the southern coast hasn't been getting regular updates, she said. Residents are disinclined to leave their homes because they don't know what areas are safe. Rodriguez worries that recovery will be difficult, especially for those hit hard by Maria, she said.

"There are a lot of people that started from zero because of Maria," she said. "(They're) starting again from zero."

Classes have not resumed

Classes won't resume across the island until crews inspect all schools and confirm buildings are safe for students, education officials announced.

The Federal Emergency Management Agency announced aid has been made available to supplement local response efforts.