Psyche, an asteroid believed to be worth $10,000 quadrillion, is observed through Hubble Telescope in new study 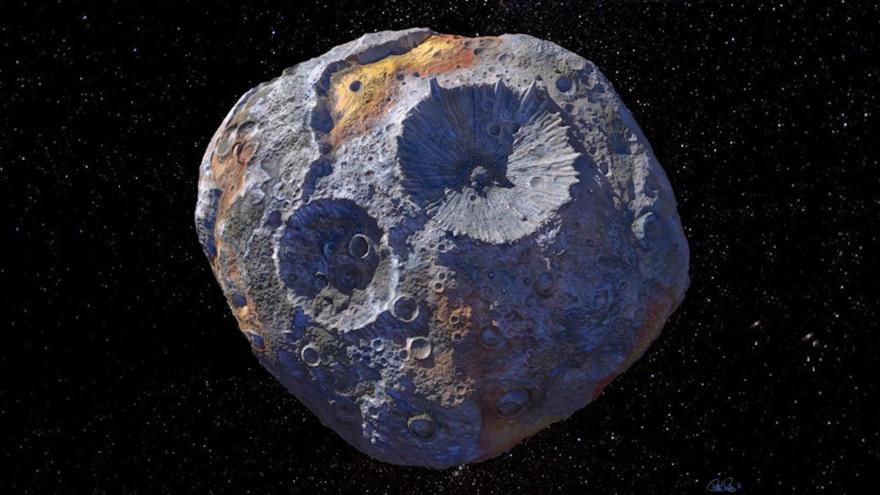 Asteroid 16 Psyche is one of the most massive objects in the asteroid belt in our solar system.

(CNN) -- A rare metallic asteroid about three times farther away from the sun than our planet could yield secrets about Earth's molten core, and scientists want to learn all about it.

A new study published Monday in The Planetary Science Journal takes a closer look at this mysterious asteroid, using data from the Hubble Telescope.

Located between Mars and Jupiter, Asteroid 16 Psyche is one of the most massive objects in the asteroid belt in our solar system, and with a diameter of about 140 miles, it is roughly the same length as Massachusetts (if you exclude Cape Cod).

The exact composition of Psyche is still unclear, but scientists think it's possible the asteroid is mostly made of iron and nickel. It's been hypothesized that a piece of iron of its size could be worth about $10,000 quadrillion, more than the entire economy on our planet.

Scientists believe that Psyche could be the metallic core of an early planet that lost its mantle and crust due to collisions that might have occurred early in the formation of the solar system.

In 2022, NASA will send an unmanned spacecraft to Psyche to study it up close and better determine its composition.

In the meantime, the new study in The Planetary Science Journal looked at Psyche through the Hubble Telescope at two specific points in its rotation, to capture both sides of the asteroid.

The study includes the first ultraviolet observations of Psyche, furthering our understanding of its surface and its possible composition.

"We looked at the way that the ultraviolet light reflected off of the asteroid surface," Tracy Becker told CNN. She is the lead author of the study and a planetary scientist at the Southwest Research Institute.

"The way the ultraviolet light was reflected from Psyche was very, very similar to the way iron reflects sunlight," she explained.

The importance of studying Psyche

Studying Psyche could help us better understand those early times in the history of our solar system, when objects would have had "higher inclinations and crazier eccentricities," and would have had more opportunities to collide with each other, Becker told CNN.

If Psyche is the metal core of a planet that never was, studying it more closely could tell us a lot about the core of our planet, which we wouldn't be able to explore, Becker said.

The study also detected two possible signals of changes to the surface of Psyche due to solar winds, according to Becker.

"The first one was that as we went deeper into the UV, we started to see the asteroid get brighter, which is pretty rare," Becker said.

"In the past, when we've seen that on certain planetary bodies, including the moon, that often tells us that it's due to the charge particles from the sun interacting with the materials on the surface, causing this brightening. We call that space weathering," she added.

The second signal, according to Becker, was the detection of iron oxide ultraviolet absorption bands.

"That could be implying that there is some sort of interaction with oxygen and the metal," Becker said.

The charged particles from the sun could be causing the oxygen to interact with the materials now, or that interaction could have occurred a long time ago, according to Becker. Further study will be required to connect these findings to more information on when the asteroid first might have formed, Becker said.

Getting ready to visit Psyche

The study comes as the NASA mission to Psyche, led by Arizona State University, is plugging away.

"We're building space hardware and getting ready for our launch in August of 2022," Lindy Elkins-Tanton, a planetary scientist who is the principal investigator for the mission, told CNN. Elkins-Tanton is also a minor author of the new study.

The mission's launch, originally slated for 2023, was moved up to 2022, and will take place from Cape Canaveral Air Force Station, using a SpaceX Falcon Heavy rocket.

The unmanned spacecraft should reach Psyche by January 2026, and it will be orbiting the asteroid for 21 months, mapping it and studying it from a distance, Elkins-Tanton explained.

When it gets to Psyche, the mission will be the first to ever photograph the asteroid.

Scientists plan on making these images immediately available for everyone on Earth to see and study further, possibly within 30 minutes of taking them, Elkins-Tanton said.

"Everyone in the world is going to be able to look at Psyche at the same time we are, and scratch their heads and say, what is this thing?" she added.

What we want to know about Psyche

Elkins-Tanton said she is thrilled about the scientific community's interest in learning more about Psyche ahead of the mission, which will be a true test for the theories about the asteroid put forth so far.

"There's the opportunity for people to make measurements, hypotheses and predictions, and then actually find out if they're right, because we're going to go and find out," she added.

The questions Elkins-Tanton hopes to find answers to could help us understand "the ingredients that went into making the cake" -- that is, our planet.

"Does [Psyche] have oxygen mixed into it, the way this study has indicated it might have some? Or other light elements, like sulfur, or even potassium, mixed into the metal phase? Can we say something about the temperature and pressure conditions under which it formed, based on its composition, that would tell us something about the size of the body it came from, and the sorts of things that went into making up our Earth?"

"One thing we can pretty much promise right now is that Psyche is going to surprise us," Elkins-Tanton said. "Everything we know about it now is probably going to be wrong when we go there and find out."

About that staggering estimate that Psyche might be worth $10,000 quadrillion, Elkins-Tanton says she takes responsibility for coming up with that number during interviews when the NASA mission was first announced in 2017.

While the conversation on mining asteroids for resources is developing here on Earth, Psyche is not the target we should strive for, according to Elkins-Tanton.

"We cannot bring Psyche back to Earth. We have absolutely no technology to do that," Elkins-Tanton said.

Even if it was possible to bring back metals from Psyche without destroying the Earth, that would quite possibly collapse the markets, Elkins-Tanton said.

"There are all kinds of problems with this, but it's still fun to think about what a piece of metal the size of Massachusetts would be worth."

Space mining and our imagination

Objects that are closer to Earth are more realistic candidates for space mining, according to Elkins-Tanton. One of the most interesting ideas is to use asteroids as a source for water, which can be made into rocket fuel.

"Most of the nearest asteroids don't have water ice on them, but they do have minerals that contain water bound up in their crystal lattices," and that could be accessed by heating up the minerals, Elkins-Tanton explained.

"They could almost be like little refueling stations," she said.

"This is a bit ahead of ourselves in terms of what we can actually do, but I love it because it shows how aspirational people can be, and it shows how powerful our imaginations are," Elkins-Tanton told CNN.

"To me, that's the great strength of space exploration -- it gives us that motivation to do great things," she added.