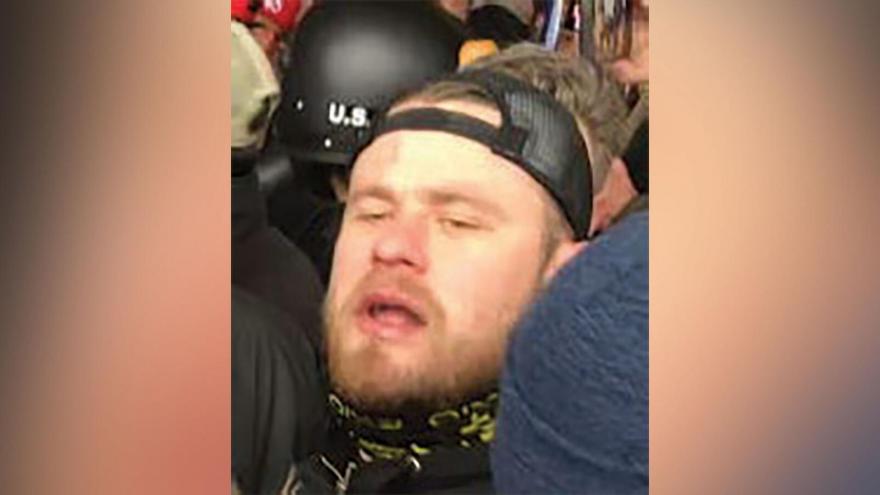 Ethan Nordean, who will appear in court Tuesday, was allegedly ready to step in and lead the Proud Boys' violent push to overtake the US Capitol, according to a new court filing.

(CNN) -- Federal prosecutors say a Seattle-area resident was nominated to have "war powers" to lead the Proud Boys on January 6, as they continue to allege that members of the Trump-supporting extremist group were prepping, communicating and organizing an attack on the Capitol.

Ethan Nordean, who will appear in court Tuesday, was allegedly ready to step in and lead the Proud Boys' violent push to overtake the US Capitol, a new court filing said, after the group's leader, Enrique Tarrio, was arrested and then told to stay away from Washington, DC.

"Defendant -- dressed all in black, wearing a tactical vest -- led the Proud Boys through the use of encrypted communications and military style equipment, and he led them with the specific plans to: split up into groups, attempt to break into the Capitol building from as many different points as possible, and prevent the Joint Session of Congress from Certifying the Electoral College results," prosecutors added.

As part of their efforts, the group distributed Chinese-made Baofeng multifrequency radios, planned to meet at the Washington Monument at 10 a.m. and intentionally abandoned President Donald Trump's speech railing against the election to get in position to overtake the Capitol, prosecutors said.

"Defendant and those he was leading were not present for any part of the speech, because hearing the speech was not in their plan," the Justice Department filing said about Nordean. "While other persons who would later participate in the Capitol riot were watching former President Trump speak, Defendant was leading Proud Boys members on a march around the Capitol and positioning them at an entrance to the Capitol grounds that was guarded by only a handful of Capitol Police officers."

In Washington, a federal prosecutor said Monday that another Proud Boys member, Dominic Pezzola, had ordered a radio from Amazon ahead of January 6 and was trying to make sure it worked around that time.

It wasn't immediately clear on Monday if the radio found for the Pezzola case is the same as the Baofeng radios bought for the larger group, but prosecutor Erik Kenerson said the Justice Department had learned about the radio purchase through search warrants conducted on others.

The Proud Boys "were trying to communicate by radio on the day of," Kenerson said.

Pezzola, of Rochester, New York, faced a hearing over whether he should be released from jail. Investigators have said he picked up a riot shield in the scrum around the Capitol -- and in the group's scheme for the day, was "a warrior," Kenerson said in court on Monday.

Pezzola's defense attorney has tried to distance him from the Proud Boys and argued he was nonviolent. The lawyer, Jonathan Zucker, downplayed the radio and said the evidence of the purchase doesn't show Pezzola was taking or giving orders during the riot. "It falls into the category of, so what?" Zucker said in court. Zucker also downplayed investigators finding a thumb drive with instructions for building explosives and weapons in Pezzola's home, saying he hadn't built a bomb.

Pezzola has pleaded not guilty to charges related to January 6. The judge hasn't yet ruled on his detention.

The Justice Department also made note on Monday of the Proud Boys' plan not to wear identifying uniforms or colors.

"By blending in and spreading out, Defendant [Nordean] and those following him on January 6 made it more likely that either a Proud Boy -- or a suitably-inspired 'normie' -- would be able to storm the Capitol and its ground in such a way that would interrupt the Certification of the Electoral College vote," the Justice Department filing said. "Defendant understood full well that the men he was leading as he charged past law enforcement and onto the Capitol grounds were likely to destroy government property, or attempt to do so."

Prosecutors have alleged Nordean was crowdsourcing money and tactical equipment before the riot as well. The new court filing documents a series of conversations Nordean is alleged to have had with people wanting to donate tactical vests, steel plates, bear mace and, in one instance, $1,000 to the Proud Boys for a travel fund before January 6.