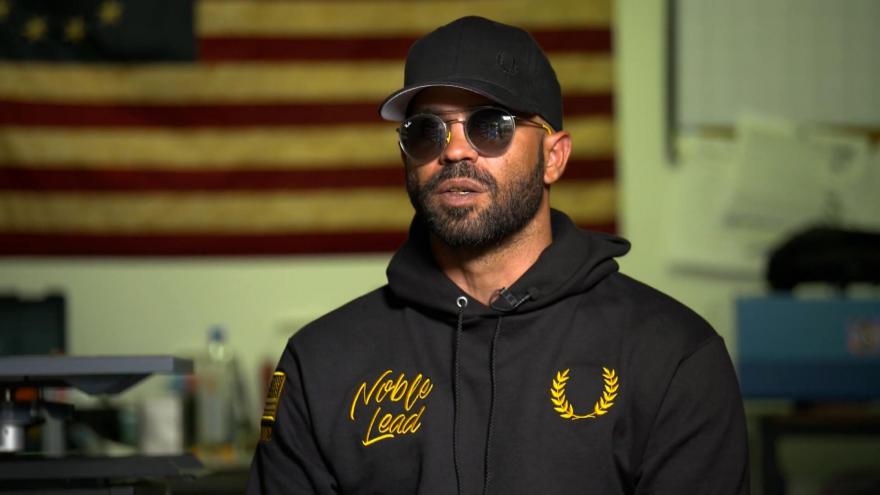 Proud Boys leader Enrique Tarrio was sentenced on August 23 to six months in jail for burning a church's Black Lives Matter banner in December and bringing high-capacity rifle magazines to Washington, DC, days before the US Capitol insurrection.

(CNN) -- Proud Boys leader Enrique Tarrio was sentenced Monday to more than five months in jail for burning a church's Black Lives Matter banner in December and bringing high-capacity rifle magazines to Washington, DC, days before the US Capitol insurrection.

The decision was handed down Monday by Judge Harold L. Cushenberry Jr. of DC Superior Court. Even though Tarrio was not in Washington on the day of the January 6 insurrection, the judge said Tarrio's preceding conduct in the nation's capital undermined American democracy.

"This court must respect the right of any citizen to peacefully assemble, protest, and make his or her views known on issues," Cushenberry said. "But Mr. Tarrio's conduct in these criminal cases vindicate none of these democratic values. Instead, Mr. Tarrio's actions betrayed them."

Tarrio, who has led the far-right extremist organization since 2018, pleaded guilty in July to the two misdemeanors. Federal prosecutors had asked the judge to give Tarrio three months in jail.

The flag-burning incident occurred at the Asbury United Methodist Church, a historically Black church, on December 12, after Tarrio and other Proud Boys attended a pro-Trump rally in Washington that later led to violent clashes. He was arrested when he returned to DC on January 4, shortly before the Capitol insurrection, and was found with two high-capacity magazines that are banned under DC's strict gun control laws.

After his arrest, he was released but ordered to stay out of DC -- a move that senior Justice Department officials later said was intended to tamp down potential violence on January 6.

In a letter to the judge ahead of sentencing, the church's senior pastor said the flag-burning incident traumatized many of her congregants and brought back "visions of slavery, the Ku Klux Klan (and) cross burnings."

She said Tarrio led a "marauding band of angry white men... apparently looking for trouble" through the streets of DC, adding, "in our opinion, this was an act of intimidation and racism."

During the hearing, Tarrio apologized directly to the church's pastor and said he "made a grave mistake" by burning the Black Lives Matter banner and later gloating about it on social media. His attorney asked the judge to sentence Tarrio to community service instead of incarceration.

"I'd like to profusely apologize for my actions... what I did was wrong," Tarrio sad.

But the far-right figure also painted himself as a victim of the situation, telling the judge, "I have suffered financially, socially, for what I've done. My family's business has been hit pretty hard. So, what I did doesn't only affect the church. It affects a lot more people, including my family."

The judge later concluded that Tarrio's apology wasn't credible and rejected Tarrio's claim that he didn't know he was destroying church property, calling it a "bald, self-serving assertion."

"He could not have cared less about the laws of the District of Columbia," the judge said. "He cared about himself and self-promotion ... His claim of 'innocent mistake' is not credible at all."

The case against Tarrio played out in local DC court and is separate from the sprawling federal investigation into the January 6 insurrection -- during which dozens of Proud Boys stormed the building and have since been charged with conspiracy and other felonies.

As part of the plea agreement, the Justice Department explicitly said it can bring "different (and) additional charges" against Tarrio regarding the attack on the Capitol. It's clear from court filings that prosecutors are aggressively investigating the Proud Boys and their actions before, during and after the January 6 riot. But it's unclear if Tarrio will ever be charged as part of that probe.

In an interview with CNN after the hearing, Tarrio said the punishment was fair but criticized the judge, who at first mistakenly gave Tarrio a longer jail term than is legally allowed on the weapons charge, and was forced to adjust the sentence twice before the proceedings ended.

"I'm not surprised with the sentence per se. I am surprised by the judge," Tarrio said. "I feel like the judge already had his mind made up. At its most basic function, a judge is supposed to know what the person in front of him was charged with. And in my case, he did not."

"If I would have known it would have happened like this, I would have gone to trial," he said, predicting that he would have beaten the property destruction charge, even though it was caught on video and he repeatedly and publicly claimed responsibility for the banner-burning.

"I learned from this experience," Tarrio said. "If anyone thinks putting me in chains silencing me, dehumanizing me will keep me quiet, they are wrong. In fact, I will use my voice even more. Even the people who disagree with me, like Black Lives Matter, see the injustice in the justice system and I hope they keep up the fight because I sure as hell will."

Tarrio told CNN he would turn himself in on September 6.

This story has been updated with comments from Tarrio.