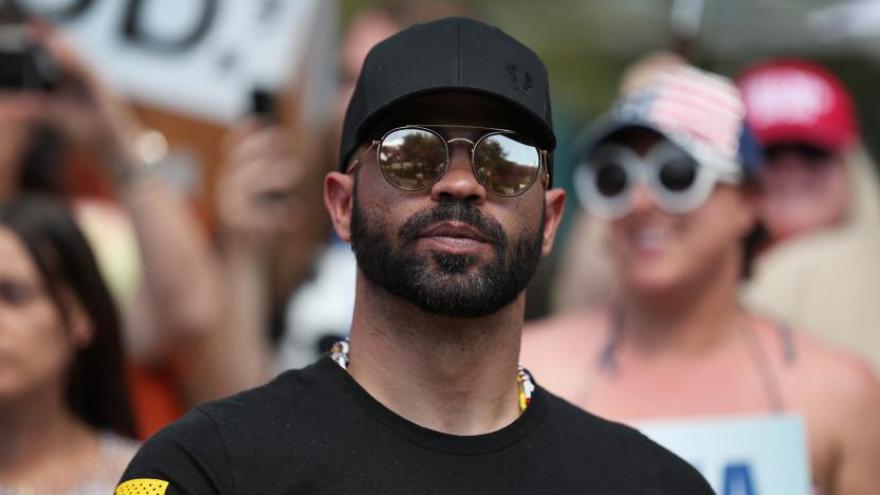 Enrique Tarrio on February 27, 2021 in Orlando, Florida. The leader of the Proud Boys, Enrique Tarrio, pleaded not guilty on April 5 to conspiracy related to the US Capitol attack on January 6, 2021.

(CNN) -- The leader of the Proud Boys, Enrique Tarrio, pleaded not guilty on Tuesday to conspiracy related to the US Capitol attack on January 6, 2021.

Tarrio, 38, was indicted in March with five previously charged members of the Proud Boys. The other men -- Ethan Nordean, Joseph Biggs, Zachary Rehl, Charles Donohoe and Dominic Pezzola -- have also pleaded not guilty. All six remain in jail.

The case, one of the largest brought by the Justice Department, is set to go to trial next month, but prosecutors have asked to delay the trial because they may add additional defendants to the indictment.

Prosecutors told a federal judge in March that they continue to investigate the Proud Boys, and that they believe they've found information to support additional charges. Others could be charged in the conspiracy case in the coming weeks, the Justice Department said.

According to the indictment, Tarrio helped to create a command structure within the Proud Boys in the lead up to January 6. Text and Signal messages highlighted in the indictment suggest that Tarrio was preparing for a "revolution," and reviewed documents that set forth a plan to occupy a few "crucial buildings" in Washington, including House and Senate office buildings around the Capitol.

Tarrio was not in Washington on the day of the attack. He was arrested on January 4 for bringing high-capacity rifle magazines to DC and ordered to leave the city.

Prosecutors say that before Tarrio left, he allegedly met with Oath Keeper leader Stewart Rhodes in a Washington parking garage.

The two met for approximately 30 minutes, according to the indictment, and at least one participant "referenced the Capitol." Tarrio then traveled to Baltimore, prosecutors say, where he helped instruct and encourage other Proud Boys members as they stormed the Capitol.