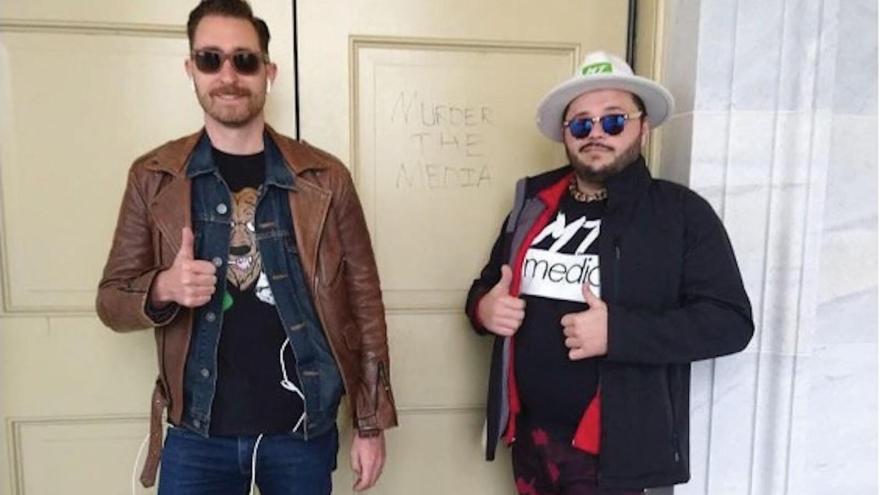 Before leaving Capitol grounds, Nicholas DeCarlo (right) wrote "MURDER THE MEDIA" in permanent marker on a Capitol door, posing for a picture beside the freshly inscribed sign with Nicholas Ochs.

(CNN) -- Two members of the Proud Boys who founded an online group named "Murder the Media" pleaded guilty on Friday to obstructing the certification of the electoral college vote at the US Capitol on January 6, 2021.

Nicholas Ochs -- an "Elder" in the Proud Boys who founded the group's Hawaii chapter -- and fellow Proud Boy Nicholas DeCarlo traveled from Texas to Washington DC the day before the riot, which they participated in together, according to the plea agreements.

"We're not supposed to be here, this is beyond the fence," Ochs told DeCarlo as they arrived on the West Front of the Capitol during the attack, according to court documents.

According to the plea agreement, both men threw smoke bombs at a line of police officers -- though DeCarlo said he forgot to pull the bomb's pin -- before traveling inside the Capitol, smoking cigarettes in the Crypt and later meeting up with Proud Boys sergeant-at-arms Ethan Nordean, who has been charged separately with seditious conspiracy alongside several other leaders of the far-right group.

Nordean, DeCarlo, Ochs and one other Proud Boy, Paul Rae, engaged in a group hug when they met up inside the Capitol, later walking to the Rotunda, according to the plea. Rae also faces several charges for his actions that day.

Before leaving Capitol grounds, DeCarlo wrote "MURDER THE MEDIA" in permanent marker on a Capitol door, posing for a picture beside the freshly inscribed sign with Ochs.

The two men will be sentenced in December and face an estimated 41 to 51 months in behind bars.