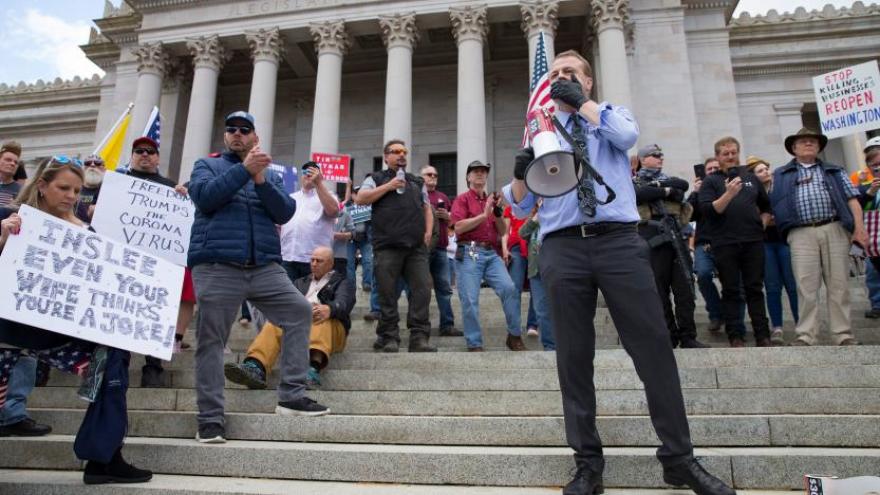 "Jesus is my vaccine," said one message on a tractor as it drove past the crowded statehouse in Harrisburg, Pennsylvania, on Monday.

"Freedom over fear," said one protester's sign in Indiana.

Across the country, more protests have popped up in both red and blue states. And they have backing from powerful conservative allies in Washington DC, including FreedomWorks, a major conservative group closely associated with the Tea Party, and Stephen Moore, an economist who President Donald Trump tapped as a member of his economic reopening council.

"Our goal is to make these protests as safe as possible and as effective as possible," Moore told CNN. "The whole idea of civil disobedience in a protest is to persuade people (that) what you're doing is speaking up for a cause, you know, that people will feel is just and right."

Moore said he and other conservatives advising the protesters have recommended that people follow health officials' recommendations -- like staying 6 feet apart from others and wearing masks -- while protesting some of those very guidelines.

Adam Brandon, president of FreedomWorks, said a "tipping point" for the activist community was the spate of reports that the Trump administration could use cell phone data to track the spread of coronavirus.

"All of a sudden this is going from a pandemic to an Orwellian nightmare," Brandon said, noting how many people in his network reacted similarly to the news about data tracking.

Car horns blared in the streets of Annapolis, where members of the group Reopen Maryland said the closures of businesses have been financially devastating.

"We don't think that there's any reason we can't protect the elderly and the vulnerable from this virus and still get our small businesses back up to work," Paul Brockman told CNN affiliate WBAL.

In Indianapolis, protester Andy Lyons said he understands the health risks. But he wants the government to back off.

Maryland Gov. Larry Hogan said he understands "the frustration among the people that want to get things open right away. I'm frustrated also."

"We're doing everything we possibly can to reopen in a safe manner," the Republican governor told CNN's "State of the Union" on Sunday. "But I don't think it's helpful to encourage demonstrations and encourage people to go against the President's own policy."

It's too early to reopen, according to White House guidelines

In Maryland and Indiana, some protesters wore hats or waved flags that supported President Trump.

But Hogan pointed out that Trump's own proposal for states to reopen in phases wouldn't allow Maryland to open anyway.

Hogan, the chairman of the National Governors sAssociation, said states such as his own haven't met those White House guidelines yet.

Three Southern governors, though, are ready to slowly reopen their states. The governors of Georgia, Tennessee and South Carolina said Monday they'd start the process of reopening businesses in their respective states this week or at the latest next Monday.

A state-by-state breakdown of coronavirus cases and deaths

One of the loudest recent protests was in Michigan, where protesters denounced Gov. Gretchen Whitmer's extension of the state's stay-home order through April 30.

"I realize how important this virus is, but now we're getting to the point where we're shutting too much stuff down," protester Tom Hughey, who said he has a small business, told CNN affiliate WILX.

The Michigan Nurses Association called the protest "irresponsible," saying it "sends exactly the opposite message that nurses and healthcare professionals are trying to get across: we are begging people, please stay home."

Whitmer told CNN's "State of the Union" on Sunday that her state is definitely not ready to reopen.

"Michigan, right now, has the third highest death count in the country" from coronavirus, Whitmer said.

"No one's more anxious to re-engage our economy than I am. But I want to do it in a way that really does save life. ... That means that we can avoid a second wave. Because as tough as this is, it would be devastating to have a second wave."

Health officials have warned additional waves of coronavirus are virtually inevitable. But "it's up to us how big those other waves will be," epidemiologist Dr. Larry Brilliant said.

He cautioned against repeating mistakes from the Spanish flu pandemic that killed 675,000 Americans. Back then, epidemiologists say, people let up on social distancing too early -- leading to a second wave of infections that was deadlier than the first.

Facebook takes down some posts where protests aren't allowed

Facebook removed those posts after discussing with officials in California, New Jersey and Nebraska.

Stone said Facebook is reaching out to several other state governments on whether anti-quarantine protests are also banned under their social distancing orders.

"Unless government prohibits the event during this time, we allow it to be organized on Facebook," Stone said. "For this same reason, events that defy government's guidance on social distancing aren't allowed on Facebook."