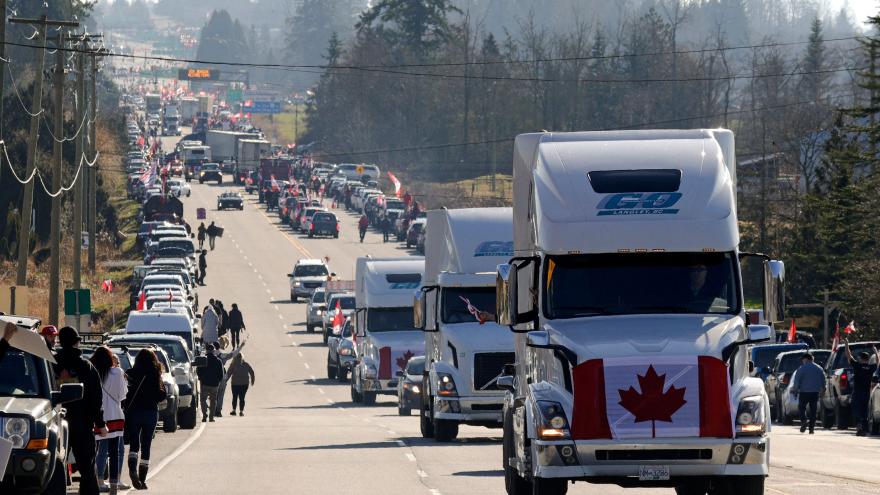 (CNN) -- A police crackdown to remove protesters decrying Covid-19 mandates could soon restore some normalcy to American and Canadian businesses hit hard by a blockade at the border.

The nearly weeklong standoff at the bridge, which links Detroit and Windsor, Ontario, has paralyzed traffic between the US and Canada and crippled a key trade route for both countries.

Now, those refusing to budge will face severe consequences, the leader of Ontario province said.

"Let me be crystal clear: it is illegal and punishable to block and impede the movement of goods, people and services along critical infrastructure," Ontario Premier Doug Ford tweeted Sunday.

"Fines for noncompliance will be severe, with a maximum penalty of $100,000 and up to a year imprisonment."

The protests stemmed from truckers opposing Canada's new mandate requiring them to either be fully vaccinated when crossing the Canadian-US border or face a two-week quarantine.

Their "Freedom Convoy" has since drawn supporters resisting other Covid-19 prevention measures, including mask mandates, lockdowns and restrictions on gatherings.

Up to 30 protesters have been arrested near the Ambassador Bridge, most of whom were charged with "criminal mischief," Windsor Police Chief Pamela Mizuno told reporters Sunday afternoon. Windsor police also seized five vehicles from protesters Sunday, Mizuno said, and seven vehicles were towed Saturday.

The police chief did not provide a timeline for when the bridge was expected to reopen, but said police were focusing on restoring traffic flow in the area and would open it as soon as they could.

"From the onset of the demonstration, our goal was to resolve this situation safely and peacefully," Mizuno said, adding "while police officers are authorized by law to use force, at this time I'm not aware of any injuries as a result of any police interaction that has occurred since the onset of the protest."

Police expect to have a heightened presence in the region to maintain order, the chief said.

'It's not just Canada. It's worldwide now'

Despite the new crackdown by police, some protesters weren't ready to go home.

Eunice Lucas-Logan showed up for her third day of protests Sunday with a quilt she made in the design of the Canadian sesquicentennial flag.

"You have the vaccinations for the measles, mumps and stuff. I'm allergic to eggs. They don't work on me. How do you know if I got that stuff in my body, I'm not going to have an anaphylactic shock to it?" she asked. "Right now, because they can't tell me for sure that it's not going to affect me down the line, I won't do it."

None of the four Covid-19 vaccines authorized for use in Canada have egg products nor egg culture in them.

"A friend of mine texted me ... 'Who imagined that little old Canada started this?' I said, yes. And take a look, it's just not staying in Canada. Australia, my cousin in Australia said it's happening there. New Zealand, Spain, it's not just Canada. It's worldwide now."

Lucas-Logan said she hopes Prime Minister Justin Trudeau finds "a very fast way of getting rid of our mandates."

"If he was a wise man, he would say, 'You know what? We don't have to do the vaccination stuff anymore,'" she said.

An 'economic crisis' may be over

Almost a week after protesters started blocking the bridge, the mayor of Windsor said the the economic fallout is ending.

"Today, our national economic crisis at the Ambassador bridge came to an end," Mayor Drew Dilkens said in a written statement Sunday.

"Border crossings will reopen when it is safe to do so and I defer to police and border agencies to make that determination."

Police started detaining protesters after a judge ordered them to leave the Ambassador Bridge by 7 p.m. Friday. Some protesters moved away on their own as police approached Saturday morning.

And for two weeks, protesters have blocked the downtown core of Canada's capital, Ottawa including at its main airport.

On Sunday, Ottawa Mayor Jim Watson announced he reached an agreement with organizers to exit residential areas of the capital's downtown core and restrict their demonstrations to streets directly in front of Canada's national parliament.

Watson recognized this was not a long-term solution but told city councilors in a statement provided to CNN "it represents a positive first step."

In a letter provided to CNN from the mayor's office, Tamara Lich, one of the "Freedom Convoy" organizers, wrote while some residents have supported and encouraged them, she realized others have been disturbed.

"We will be working hard over the next 24 hours to get buy in from the truckers," Lich wrote in the letter addressed to Watson. "We hope to start repositioning our trucks on Monday," Lich wrote.

Most Canadians (including truckers) are vaccinated

Canada has one of the highest vaccination rates in the world, with about 4 in every 5 Canadians fully vaccinated, according to data from Johns Hopkins University.

And nearly 90% of the country's truckers are fully vaccinated and eligible to cross the border, according to the Canadian government.

Still, the protesters have been vocal and blared the horns of their vehicles, prompting a judge in Ottawa to rule Monday they must stop honking for 10 days.

Protesters have also used semitrailers -- and sometimes farm equipment and other vehicles -- to block crossings between Emerson, Manitoba, and Pembina, North Dakota, as well as at the Coutts access point between Alberta and Montana.

And about 50 vehicles have blocked access to the Canadian-US border at Emerson since Thursday, the Manitoba Royal Canadian Mounted Police said Saturday.

The behavior of some protesters is 'completely unacceptable'

Trudeau and other government officials were briefed on the law enforcement action in Windsor Saturday, a statement from his office said.

"The Prime Minister stressed border crossings cannot, and will not, remain closed, and all options remain on the table," the statement said.

"It's completely unacceptable -- particularly in the neighborhoods where some of the protesters are going into restaurants and refusing to wear a mask and harassing staff and really being belligerent to the residents of our city," the mayor said.

Officials in US 'ready' if similar protests break out

US officials are gearing up in case similar protests emerge -- including the possibility of a protest affecting Sunday's Super Bowl in Southern California.

"The convoy will potentially begin in California as early as mid-February and arrive in Washington, DC, as late as mid-March, potentially impacting the Super Bowl LVI scheduled for 13 February and the State of the Union Address scheduled for 1 March," a bulletin from the Department of Homeland Security said.

And a group in the US said it's organizing two trucker convoys that will head to the US-Canadian border in Buffalo, New York, this weekend.

But the city said Friday no group had applied for permits to hold events.

"Nor have the organizers contacted our Special Events Office to arrange for the appropriate insurance and public safety planning that is required for all events in the City to ensure the health and safety of residents and visitors," Buffalo city spokesperson Michael DeGeorge told CNN.

"It is always a concern when laws that are designed to keep people and property protected are willfully ignored."

Buffalo's mayor said the city is ready to handle what might happen.

"We're ready for these trucks," Mayor Byron Brown said Saturday. "But our goal is to keep our roadways open and to make sure that residents and visitors are safe and healthy."