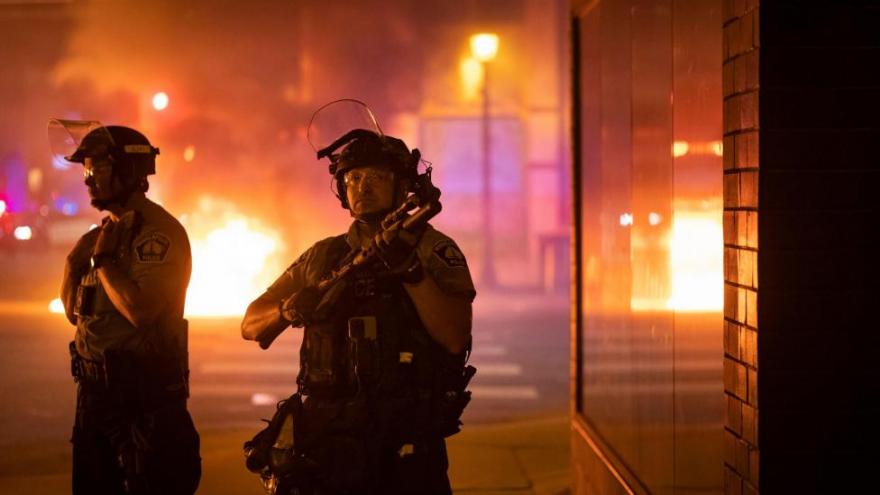 (CNN) -- Protesters gathered for a second straight night in Minneapolis' Uptown area late Friday and early Saturday over the killing of a suspect by law enforcement -- a Black man authorities say had fired a gun.

Demonstrators, protesting Thursday's shooting death of Winston Boogie Smith Jr., blocked intersections as fires of debris burned nearby, video from the scene showed. Minneapolis police made "multiple arrests" in connection with the protests, they said in a news release.

The relatives of Smith, 32, have called for the release any video of Thursday's deadly encounter, including from security cameras.

Thursday's shooting happened in an Uptown parking garage as a US Marshals Service task force was trying to arrest Smith, who was wanted on a state arrest warrant for possession of a firearm by a felon, authorities said.

Though the marshals service did not say who was killed, the Hennepin County Medical Examiner's Office identified the slain man as Smith.

Smith was in a parked car when the task force tried to arrest him. The suspect "produced a handgun" and failed to comply with officers' commands, and the task force members shot him, the marshals service said.

Evidence shows Smith "fired his weapon from inside the vehicle," according to Minnesota's Bureau of Criminal Apprehension, which is investigating the killing.

Two sheriff's deputies on the task force -- one from Hennepin County, and one from Ramsey County -- fired their guns, striking Smith, the BCA said.

A female who also was in the car sustained minor injuries from glass debris, the marshals service said.

No body camera or squad car camera footage from the incident exists, according to the BCA, which said the marshals service doesn't allow body cameras for officers serving on that task force.

A warrant was issued for Smith in late May after he failed to appear at a hearing after pleading guilty to a possession of a firearm charge in Ramsey County. Smith first appeared in court on the charge in December 2019, a court docket shows.

In November 2020, on the eve of trial, he pleaded guilty to a single charge of possession of a firearm in a plea agreement, according to the docket. On May 19, 2021, a warrant was issued for failure to appear at a hearing in the case and he was ordered to be held without bond or bail, the docket shows.

They blocked traffic at one of them -- Hennepin Avenue and Lake Street -- during the Friday evening rush hour," the Star Tribune reported.

Police officers on bikes tried clearing out the intersection, "but protesters later blocked Lake Street again with a makeshift barricade of motorcycles, bike racks and dumpsters," the newspaper reported.

A large number of police officers in protective gear were deployed near the intersection in the evening, video shot by Brendan Gutenschwager showed.

The video showed fires burning in the blocked intersection, a car being towed and officers engaging in a tussle with someone on the ground who they appeared to be arresting.

Smith's death comes as the city grapples with last year's killing of George Floyd during Floyd's arrest in Minneapolis last year, and with the murder conviction in that case of former police officer Derek Chauvin.

On Thursday, Minneapolis city workers removed parts of a memorial at the intersection where Floyd took his final breaths, as the city stated its plans to create a permanent memorial and reopen the area to through-traffic.

The intersection where Floyd died -- Chicago Avenue and 38th Street -- is about a 3-mile drive southeast of where Thursday's shooting happened.