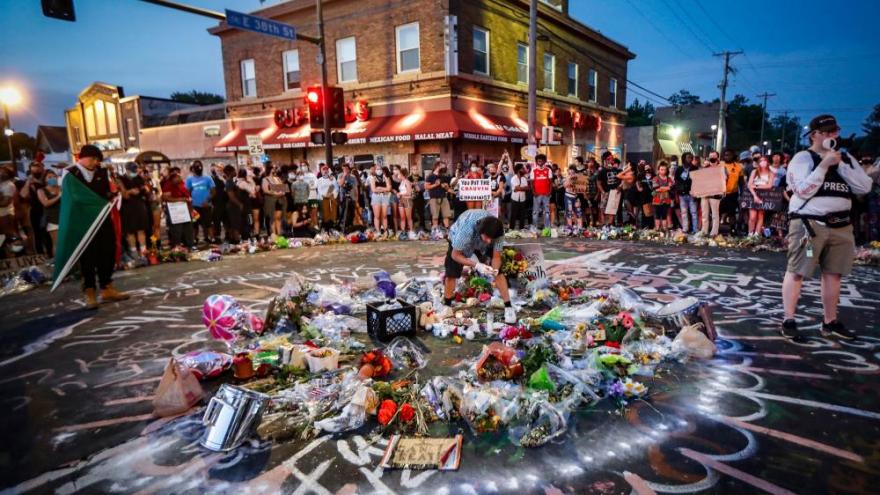 Protesters gather at a memorial for George Floyd where he died outside Cup Foods in Minneapolis, MN.

In Minneapolis, people shouted with joy when they heard that all four officers who had been arresting Floyd when he died May 25 would be in jail soon.

The protests lately have been largely peaceful -- as they were Wednesday -- though in some cities, violence and looting has come toward the end of the day.

In New York, heavy rain swept in Wednesday after sunset, sending many people scurrying, but before that there were some apparent arrests for curfew violations.

Protesters and police clashed in Brooklyn and several were taken into custody. At least one police officer was injured.

In Washington, DC, which moved its curfew to 11 p.m., protesters were pushed back from Lafayette Square by authorities in camouflage uniforms to a spot about a half a block away.

New charges were filed against four fired officers involved in the death of Floyd. The 46-year-old father died in Minneapolis last week after then-officer Derek Chauvin knelt on Floyd's neck for 8 minutes and 46 seconds.

"This moment is a tipping point to change America," Floyd family attorney Ben Crump said. "All the world is watching."

Floyd's son Quincy Mason told CNN's Sara Sidner that his family wants justice. "I'm here with my family. We demand justice. My father shouldn't have been killed like this," he said.

The new charges were not influenced by the public outcry in the case nor the fact that a public memorial is scheduled for Floyd on Thursday, Ellison said.

'I don't think we get another chance to fix this'

Minnesota Gov. Tim Walz on Wednesday visited the site of the fatal encounter for the first time.

Walz said he's been wanting to visit the scene. But "I very much worry about white politicians appropriating black pain. And that's certainly not it. I have to personally and viscerally feel this," he said.

"It's unfortunate I've become friends with mothers only because their sons were killed," the governor said.

And like the protesters demanding an end to police brutality, Walz said America must change now.

"I don't think we get another chance to fix this in the country," he said. "I think being at the heart of this and seeing the community's pain so viscerally, this is going to have to be that change that we look for."

Obama urged young African Americans to "feel hopeful even as you may feel angry," because he sees epic changes.

He told his online audience watching the event hosted by My Brother's Keeper Alliance, a program of the Obama Foundation, that the changes are "as profound as anything I have seen in my lifetime.

"I know enough about that history to say: There is something different here," Obama said, referring to the protests of the 1960s. "You look at (the new) protest and that was a far more representative cross-section of America out on the streets, peacefully protesting, who felt moved to do something because of the injustices that they have seen. That didn't exist back in the 1960s, that kind of broad collation."

Obama told protesters that hitting the streets is not enough, and he urged them to vote in upcoming elections.

Since May 26, the day after Floyd's death, at least 9,839 people have been arrested nationwide during protests, according to CNN's tally from agencies across the country.

While Tuesday night's protests were much more peaceful than the previous night, there were some skirmishes.

In New York City, at least 40 protesters were arrested.

Some residents have filed formal complaints against officers' conduct during protests. The Seattle Office of Police Accountability received about 14,000 complaints about the conduct of Seattle police during demonstrations over the weekend, spokeswoman Anne Bettesworth said Tuesday.

Pockets of counterprotesters have also emerged.

In Boise, Idaho, police formed a line between the hundreds people who showed up for a vigil and some counterprotesters holding American flags and Blue Lives Matter flags, CNN affiliate KBOI reported.

George Floyd's death was due cardiopulmonary arrest -- or the stopping of his heart -- according to the final autopsy results released Wednesday by the medical Hennepin County Medical Examiner.

The report from Dr. Andrew Baker says Floyd's neck was compressed when Chauvin's knee was on it for more than eight minutes, but does not conclude that it was the direct cause of his death. It says in one section about Floyd's injuries that there were "no areas of contusion or hemorrhage within the musculature" of his neck muscles.

An independent autopsy commissioned by the Floyd family disagreed with the conclusion of the county. It says that Floyd died of "asphyxiation from sustained pressure."

The final report from the medical examiner says Floyd had a number of bruises and cuts on his head, face, mouth, shoulders, arms and legs. But it finds no evidence that any of those injuries directly would have killed him.

The autopsy says Floyd had heart disease and a history of high blood pressure. A preliminary toxicology report found moderate levels of fentanyl and methamphetamine.

The county autopsy also indicates that Floyd had tested positive for coronavirus in April.