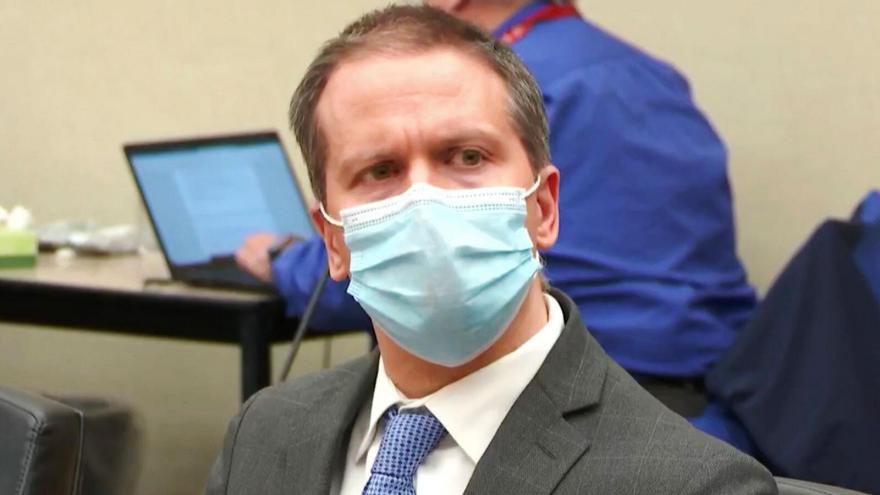 Minnesota prosecutors are requesting a 30-year prison sentence for Derek Chauvin, the former officer convicted of the murder of George Floyd, according to a sentencing memo filed. Pictured here, Derek Chauvin, on April 20 in Minneapolis.

(CNN) -- Prosecutors for the state of Minnesota are requesting a 30-year prison sentence for Derek Chauvin, the former officer convicted of the murder of George Floyd, according to a sentencing memo filed Wednesday.

Thirty years is "twice the upper end of the presumptive sentencing range," according to the memo filed with the District Court of Hennepin County on Wednesday. It "would properly account for the profound impact of Defendant's conduct on the victim, the victim's family, and the community," the state argued.

With just weeks until the former Minneapolis police officer's sentencing, Chauvin's attorney, Eric Nelson, argued in a filing Wednesday that Chauvin should instead receive probation and time served, or at least a sentence less than what the law guides.

"Mr. Chauvin asks the Court to look beyond its findings, to his background, his lack of criminal history, his amenability to probation, to the unusual facts of this case, and to his being a product of a 'broken' system," Nelson wrote. "Mr. Chauvin's offense is best described as an error made in good faith reliance his own experience as a police officer and the training he had received -- not intentional commission of an illegal act."

Nelson also wrote, "A stringent probationary sentence with incarceration limited to time served would achieve the purposes of the sentence in this case."

Chauvin was convicted April 20 of second-degree unintentional murder, second-degree manslaughter and third-degree murder. He will have 90 days to appeal to the Minnesota Court of Appeals after the lower court enters a final judgment and imposes a sentence.

In the 54-page memo, Nelson highlighted multiple examples of alleged prosecutorial misconduct, juror misconduct, witness intimidation and a "barrage" of "prejudicial news" that he says prevented the former Minneapolis police officer from receiving a fair trial.

"The media coverage in this case is like a bomb explosion: Hennepin and Ramsey counties are ground zero and although felt far and wide, the effects of the explosion diminish as they ripple outward from the Twin Cities," Nelson said in the memo.

"Ever since the incident, potential jurors in the Twin Cities have been faced with daily, one-sided reminders of the events of May 25, 2020. Signs demanding "Justice for George" are a regular sight in Twin Cities neighborhoods," Nelson added.

The filing also cites publicity from the City of Minneapolis' $27 million settlement with the Floyd family announced during jury selection, the fatal officer-involved shooting of Daunte Wright during the trial in nearby Brooklyn Center, Minnesota, and included comments made by US Rep. Maxine Waters, who called for protesters to "stay on the street" and "get more confrontational" if Chauvin were to be acquitted.

Nelson even noted the defense's case and the potential outcome of the proceedings were mocked on the opening of NBC's "Saturday Night Live" during the trial.

Chauvin's attorney repeatedly argues in the filing that many of these issues could have been corrected if Judge Peter Cahill had granted a change of venue.

"The Court's failure to do so was a prejudicial abuse of discretion that violated Mr. Chauvin's constitutional due rights, and a new trial must be granted," Nelson said.

Minnesota Attorney General Keith Ellison's office declined to comment on the new filing from Nelson on Wednesday. The office has until June 9 to file a response to the memo in writing with the court.

The sentencing memo from prosecutors Wednesday read in part, "This Court has already concluded that the facts proven beyond a reasonable doubt at trial support the existence of four separate aggravated sentencing factors," and specifically that Chauvin, "(i) abused a position of trust and authority; (ii) acted with particular cruelty; (iii) acted in concert with three other individuals who all actively participated in the crime; and (iv) committed the offenses in the presence of children."

Cahill ruled in favor of those four factors in May.

"The number and severity of the aggravating factors applicable to Defendant's conduct reflect both Defendant's culpability and the extraordinary nature of this case," prosecutors wrote.

Nelson, in his argument for Chauvin, listed a number of factors including age.

"Independent of the long-term damage a prison sentence would inflict upon Mr. Chauvin's life prospects, given his age, convictions for officer-involved offenses significantly increase the likelihood of him becoming a target in prison. Such safety concerns are evident by his presentence solitary confinement in a high-security prison," Nelson wrote.

Nelson also argued Chauvin's lack of criminal history, his respectfulness to the judicial process, and his service to the community, despite being "reduced to this incident," should be among the reasons the court should "pronounce a strict probationary sentence, along with a period of incarceration equal to the time he has already served."

Cahill has yet to rule on any of the arguments filed Wednesday.

The lengths of possible sentences

Because of Cahill's ruling, Chauvin can be sentenced to more time than the recommendations set out, but not more than the legal maximum.

The sentences for all three crimes would likely be served at the same time, not consecutively.

"Generally, when an offender is convicted of multiple current offenses ... concurrent sentencing is presumptive," according to the guidelines.

Minnesota law allows offenders convicted of these crimes to serve two-thirds of their sentence in prison, then be released under supervision for the remaining third provided they show good behavior while confined.