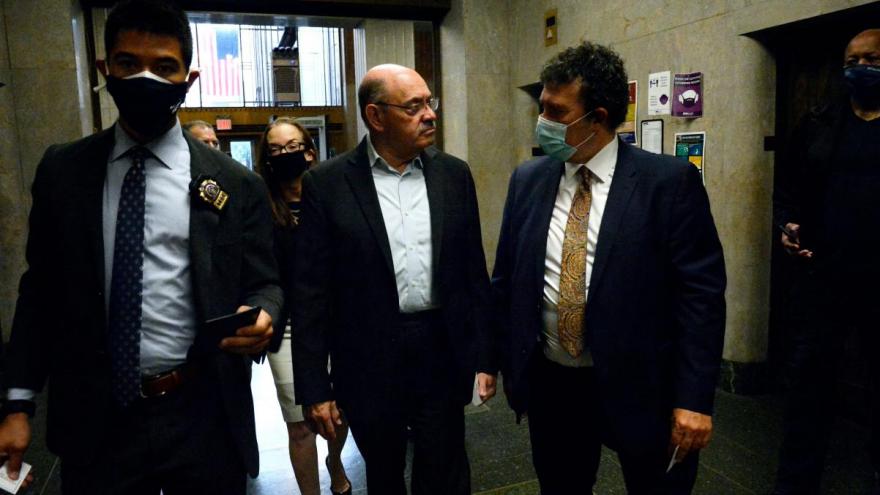 Allen Weisselberg, center, CFO of the Trump Organization, surrendered on July 1 to the Manhattan district attorney's office in New York.

An indictment unsealed Thursday by the Manhattan district attorney's office charged the company and an entity called Trump Payroll Corporation with 10 counts and Weisselberg with 15 felony counts in connection with an alleged scheme stretching back to 2005 "to compensate Weisselberg and other Trump Organization executives in a manner that was 'off the books.'"

They were charged with a scheme to defraud, conspiracy, criminal tax fraud, and falsifying business records. Weisselberg was also charged with grand larceny and offering a false instrument for filing.

Prosecutors said Thursday their investigation is ongoing. The probe has delved into whether the Trump Organization misled lenders, insurers and tax authorities about the value of certain properties, the treatment of tax deductions as well as hush money payments to silence an alleged affair with Trump.

Thursday's indictment, which focused largely on Weisselberg, described an array of luxury perks he received from the company allegedly in lieu of compensation, including a Upper West Side apartment, a pair of Mercedes-Benz cars for him and his wife, and private school tuition for two family members whom CNN has reported are his grandchildren.

All told, the indictment alleged, Weisselberg evaded taxes on $1.76 million in income over a period beginning in 2005 and concealed for years that he was a resident of New York City, thereby avoiding paying city income taxes. Prosecutors alleged he evaded a total of more than $900,000 in federal, state and city taxes during this period, and received a total of $133,124 in state tax refunds "to which he was not entitled."

"The scheme was intended to allow certain employees to substantially understate their compensation from the Trump Organization, so that they could and did pay federal, state and local taxes in amounts that were significantly less than the amounts that should have been paid," the indictment said.

After entering a courtroom in New York Supreme Court Thursday afternoon in handcuffs, Weisselberg pleaded not guilty, and Justice Juan Merchan released him on his own recognizance, ordering him to turn in his passport.

Former President Donald Trump himself was not charged. Following the unsealing of the indictment, he blasted the charges in a statement, criticizing the investigation as led by two Democrats: Cyrus Vance Jr., the Manhattan district attorney, and Letitia James, the New York state attorney general.

"The political Witch Hunt by the Radical Left Democrats, with New York now taking over the assignment, continues. It is dividing our Country like never before!" Trump said.

In statements, the Trump Organization also characterized the prosecution as a political act and said Weisselberg was being used as a "pawn in a scorched-earth attempt to harm the former president."

The indictment of the Trump Organization is the product of more than two years of investigation by Vance, a probe that began with questions about accounting practices tied to hush-money payments made by former Trump lawyer Michael Cohen and eventually led to a Supreme Court fight over a subpoena for Trump's tax documents.

It is rare, according to lawyers who specialize in tax evasion cases, for prosecutors to bring charges solely related to fringe benefits provided by a company, and in recent weeks, lawyers for the Trump Organization met with prosecutors in Vance's office, hoping to persuade them not to bring the case.

Those efforts failed, and on Thursday, prosecutor Carey Dunne faulted the company for its behavior during the investigation, saying it had refused to comply with subpoenas and or allowed employees to speak to prosecutors outside of the grand jury.

"Contrary to defense assertions, there's no clearer example of a company that should be held to account," he told the judge.

Details of the indictment

Weisselberg attempted to conceal his participation in the scheme with the knowledge of the company, prosecutors said.

According to the indictment, the company paid for rent, utilities and garage expenses on a Riverside Blvd. apartment Weisselberg and his wife occupy.

Though Weisselberg began living in the apartment rented by the company for him in 2005, he didn't say he was a New York City resident on his tax returns until 2013, when he sold his home in Wantagh, New York, thereby avoiding paying city income taxes, according to the indictment.

Between 2005 and 2017, the company gave Weisselberg approximately $1.17 million in untaxed income connected to rent and related expenses, prosecutors said.

Perks received by Weisselberg also allegedly included $359,058 in tuition expenses at Columbia Grammar & Preparatory School for two of his grandchildren, paid for by checks from Trump's account signed by Trump himself, and later from the Donald J. Trump revocable trust.

According to the indictment, the payments for Weisselberg's grandchildren were "indirect compensation" and were not included on Weisselberg's W-2 forms, and no income taxes were withheld by the Trump Organization or Trump Payroll Corp. in connection with the tuition payments.

Over the course of the probe, prosecutors have examined a wide array of possible violations, including whether the real-estate company misled lenders and insurers or committed tax fraud, even adding a special prosecutor, Mark Pomerantz, to aid in the expansive inquiry. But in recent months, the focus has narrowed to taxes on benefits.

In particular, it came to center on Trump's longtime lieutenant Weisselberg, a top company executive who has worked for him since 1973.

Beginning late last year, prosecutors gathered evidence on Weisselberg with the cooperation of his former daughter-in-law, Jennifer Weisselberg. In the months since she began speaking to authorities, she has turned over boxes of financial records and has met with investigators multiple times, her lawyer told CNN.

The indictment of Weisselberg could intensify the pressure for him to cooperate with prosecutors in their wide-ranging investigation of Trump, the company and its executives, an outcome prosecutors had been seeking for months but which he rejected.

And the indictment of the company is a watershed moment after years of criminal, civil and congressional probes that circled Trump, his company, and his inner circle of family members, advisers and lawyers.

Trump's critics cheered the indictment, saying it represents a modicum of accountability for a man who survived the special counsel investigation by Robert Mueller as well as two impeachments. But many were left wondering if further charges are in the works.

Rebecca Ricigliano, a former New York federal prosecutor, said the indictment "reads a lot like classic, old-school fraud" and appeared designed to put enormous pressure on Weisselberg to turn on his longtime boss.

"This is clearly an assault against Weisselberg," she said. "The message is: Allen, this is about you. That then begs the broader question, what does this mean in terms of what he does next?"