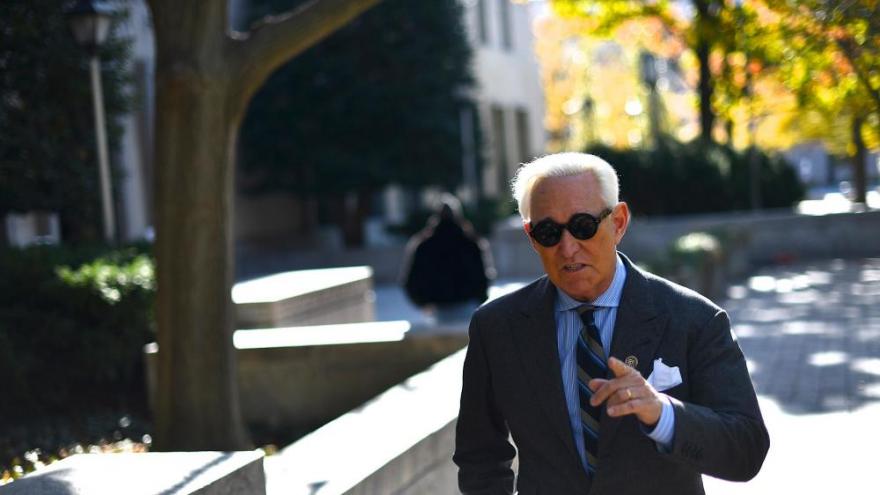 Prosecutors have asked a federal judge to sentence Roger Stone, a former informal adviser to President Donald Trump, to seven to nine years in prison for lying to Congress and witness tampering during the Russia investigation, according to a new court filing.

(CNN) -- Prosecutors have asked a federal judge to sentence Roger Stone, a former informal adviser to President Donald Trump, to seven to nine years in prison for lying to Congress and witness tampering during the Russia investigation, according to a new court filing.

"Roger Stone obstructed Congress' investigation into Russian interference in the 2016 election, lied under oath, and tampered with a witness. And when his crimes were revealed by the indictment in this case, he displayed contempt for this Court and the rule of law. For that, he should be punished in accord with the advisory Guidelines," prosecutors wrote on Monday.

READ: Prosecutors ask for 7 to 9 years in prison for Roger Stone

The prosecutors said Stone's recommended sentencing, based on standardized calculations, is 87 months to 108 months in prison, which amounts to about seven to nine years.

Stone is scheduled to be sentenced next week. He was found guilty on all seven charges brought against him in November.

Stone filed his own take before his sentencing, asking the court to allow him to avoid prison.

His attorneys also argued that a prison sentence of 15 months to 21 months would be typical for his crimes, placing their estimation much lower than what prosecutors asked for.

"In the end, the investigations yielded no evidence of the involvement of any American with the Russian government or any agent operating on its behalf to interfere in the 2016 election. It is also undisputed that Roger Stone had nothing to do with obtaining the compromised emails or providing them to WikiLeaks," Stone's attorneys argued.

Trump objected to the prosecutors' recommendation, lambasting overnight Tuesday what he called a "horrible and very unfair situation."

"The real crimes were on the other side, as nothing happens to them. Cannot allow this miscarriage of justice!" Trump tweeted.

One letter-writer, Jan Webster, wrote that she is the wife of a retired Seattle Seahawks player with Alzheimer's disease and commends Stone for advocating for NFL families in the concussion settlement.

"My politics may not align with Mr. Stone's but I am grateful that he chose to speak on my family's behalf, and for many people that may not agree with him politically, because he believes in our cause," Webster writes. "At this time, in our bitterly divided nation, we need more people who will stand up for what the [sic] believe in, politics aside."

In the memo to the judge on Monday, prosecutors walked through the details of Stone's crimes, describing them as part of an effort for him to help the Trump campaign as WikiLeaks released stolen emails that could hurt Trump's 2016 opponent, Hillary Clinton.

"In the months leading up to the 2016 presidential election, Stone made repeated efforts to obtain information from an organization called WikiLeaks that would help the Trump campaign and harm the campaign of Trump's opponent, Hillary Clinton," prosecutors wrote.

Stone lied to Congress five times while testifying to the US House privately in September 2017 about his attempts to gain information from WikiLeaks and help Trump.

The prosecutors also argued that Stone's lies to House investigators substantially interfered with their Russia investigation.

"Investigations into election interference concern our national security, the integrity of our democratic processes, and the enforcement of our nation's criminal laws. These are issues of paramount concern to every citizen of the United States. Obstructing such critical investigations thus strikes at the very heart of our American democracy," the prosecutors added.

Stone threatened Credico with obscenities and references to a scene from The Godfather, a jury learned. The prosecutors even compared Stone's witness tampering crime with convicted former Trump campaign chairman Paul Manafort's, saying Stone's was "substantially more serious." Judge Amy Berman Jackson, who will sentence Stone on February 20, gave Manafort a three-and-a-half year prison sentence following his plea on two charges -- with 13 months of the sentence stemming from Manafort's contact with a potential witness before his trial on lobbying charges.

The prosecutors also slammed Stone for "low regard in which he held these proceedings" in court. They revisited several episodes where Stone posted on social media or communicated with members of the media and right-wing radio host Alex Jones about his case and former special counsel Robert Mueller's investigation while he was barred by the judge from speaking publicly.

Jackson is also sentencing Stone and has broad authority to sentence him as she sees fit. One of the times Stone broke his gag order, the prosecution notes, directly involved her -- when Stone posted an image on Instagram of crosshairs behind her head.

"Stone's actions were not a one-off mistake in judgment. Nor were his false statements made in the heat of the moment. They were nowhere close to that," the prosecutors' memo said on Monday.

This story has been updated with additional information from Monday's filing and Trump's response.