Proposal to build permanent fence around the Capitol meets resistance 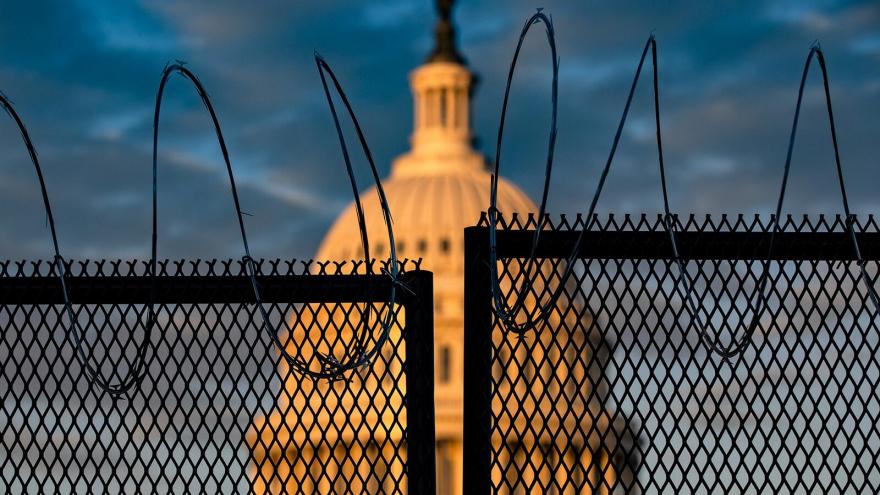 Proposal to build permanent fence around the U.S. Capitol meets resistance. The U.S. Capitol is seen behind a fence with razor wire on January 16, 2021 in Washington, D.C.

(CNN) -- A recommendation from the acting chief of the US Capitol Police for permanent fencing and other enhanced security measures around the US Capitol in the aftermath of the January 6 insurrection has been met with resistance from lawmakers on both sides of the aisle and from the mayor of Washington.

Acting chief Yogananda Pittman proposed permanent fencing in a statement provided to reporters Thursday, but DC Mayor Muriel Bowser quickly slammed the idea and said the city will not "accept extra troops or permanent fencing as a long-term fixture in DC."

The proposal for permanent fencing comes weeks after a pro-Trump mob attacked the Capitol, leaving five people dead and extensive damage to the property.

"In light of recent events, I can unequivocally say that vast improvements to the physical security infrastructure must be made to include permanent fencing, and the availability of ready, back-up forces in close proximity to the Capitol," Pittman said.

She continued: "I look forward to working with Congress on identifying the security improvements necessary to ensure the safety and security of the Congress and the U.S. Capitol."

Bowser acknowledged the need for extra security for upcoming events but made it clear she did not want those enhanced measures to be permanent.

"Based on conversations with federal partners, there are some potentially volatile events upcoming that will require extra security. Fencing and the presence of troops will be a part of that," Bowser tweeted. "But we will not accept extra troops or permanent fencing as a long-term fixture in DC. When the time is right, the fencing around the White House and U.S. Capitol, just like the plywood we've seen on our businesses for too long, will be taken down."

Congresswoman Eleanor Holmes Norton, the District of Columbia's sole representative in Congress, wrote a letter Friday to the US Capitol Police Board urging against the proposal for permanent fencing around the Capitol.

"More needs to be done to protect the Capitol complex, but the failure of Capitol security leaders to plan for the predictable terrorist attack on the Capitol on January 6, 2021, does not justify closing the complex from the public, to whom it belongs," she wrote.

Democratic Rep. Jake Auchincloss, a Massachusetts freshman, tweeted that it would be a "mistake to turn the home of our democracy into a fortress. The Capitol needs to be safely open for constituents, press, and visitors."

Rep. Elise Stefanik, a New York Republican, also spoke out against the idea on Twitter. "This is the People's House. I am adamantly opposed. There has been no threat briefing given to Members of Congress to justify this proposal," she tweeted.

House Speaker Nancy Pelosi -- who told reporters earlier Thursday that "the enemy is within the House of Representatives" -- did not immediately respond to CNN's request for comment on the fencing.

The California Democrat met with retired Lt. Gen. Russel Honoré, who is conducting a security review of the Capitol, on Thursday but provided few details.

"I was pleased to be briefed on the General's initial assessment which covered operational readiness, interagency cooperation, security infrastructure and the morale and readiness of institutional staff. As we consider the need for an emergency supplemental funding bill to meet institutional security needs, I want to thank the General for reviewing what is necessary for the Capitol Police to do their jobs," Pelosi said in a statement Thursday afternoon.

When asked if the fencing around the Capitol should stay up permanently, Senate Majority Leader Chuck Schumer told reporters, "I would tend to defer to the experts as to what is the safest way to be. We'll see, I don't know."

The New York Democrat added: "There should be both safety and the right to access the building."