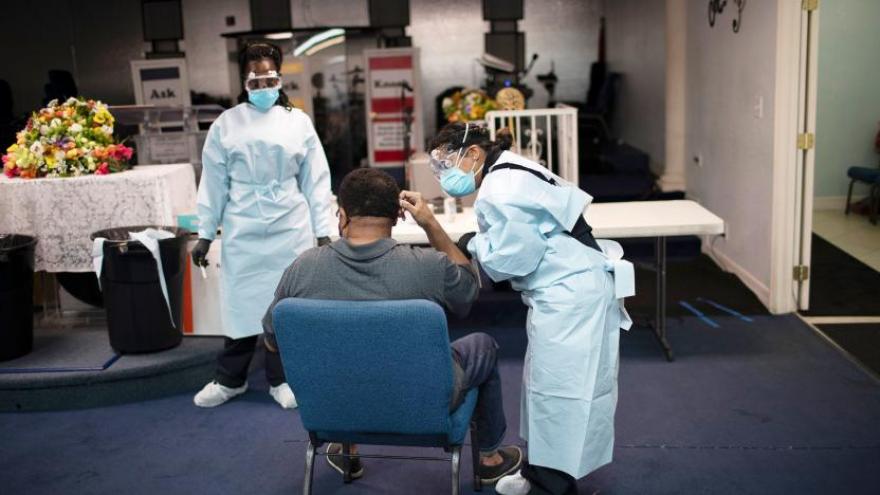 An antibody treatment designed to protect against coronavirus could be available as early as this fall. This image shows health care workers testing a person for COVID-19 at a pop up testing site on July 22, 2020 in Pembroke Park, Florida.

(CNN) -- An antibody treatment designed to protect against coronavirus could be available as early as this fall -- but only for a fraction of the millions of Americans who might benefit from the treatment.

Companies are already testing monoclonal antibody therapies -- antibodies created in a lab to target Covid-19 -- in humans. The trials are determining whether the antibodies can prevent people from becoming infected and whether the treatments can stave off the worst symptoms of coronavirus when a patient does become infected.

There's no guarantee they will work.

If they are proven effective, they could be available to Americans months before a vaccine is ready. But according to drug-makers, the initial distribution will most likely be left up to the federal government, whose shoddy track record on setting up widespread testing, distributing personal protective gear and dispensing other drugs such as remdesivir to fight coronavirus is already setting off alarms.

"This will be a test run for allocation of vaccines," said Rep. Bill Foster, an Illinois Democrat who has asked the Government Accountability Office for enhanced oversight, and regular updates, on the therapeutic manufacturing process. "This scramble for monoclonal antibodies could happen two months from now or even earlier."

It's not clear who will make the decisions about where the initial antibody doses go. And the Trump administration's record is littered with allegations of unfair distribution and political favoritism.

Foster, a member of the House coronavirus subcommittee, imagines a potential nightmare scenario where "poor people are dying in overcrowded hospitals because they can't get the adequate doses of the curative antibody therapeutics, while rich people are getting preventative doses by signing up for the week stay at the presidential suite at Mar-a-Lago," he said. "There's really very little public trust of Jared Kushner and Donald Trump and the White House to make a fair allocation of emergency medical treatments."

Drug-makers insist they're committed to making sure their products wind up with the patients who need them most. Government officials, meantime, say they're still working out their manufacturing and distribution plans.

Drug-makers and policymakers alike envision enormous demand for antibody treatments. They could be a lifesaver in stopping the spread of coronavirus among staff and patients in nursing homes, which have seen devastating death rates. They could also limit the worst effects of the virus, before patients wind up on ventilators, and be used preventatively for frontline workers or even their family members if a worker is exposed to someone with coronavirus.

But even in the best-case scenario -- even if such an antibody treatment proves effective -- there will likely be only a few hundred thousand doses initially available. The early supply is expected to fall far short of the tens of millions of Americans who could potentially benefit from the treatment.

A study from researchers at Duke University determined the US would need more than 60 million doses of antibody therapies over the next year to treat every American hospitalized with coronavirus, fighting it at home or exposed to it by someone in their household.

"We won't have enough capacity to make enough of these. So, a vaccine ultimately has to be the broadest solution for the entire public," said Dr. Len Schleifer, the chief executive of Regeneron, one of the companies currently running human trials of monoclonal antibodies and one of the only companies with a US government contract for this type of therapy. "We'll have to direct these antibodies where we can do the most good, assuming that they work."

Under Operation Warp Speed, the public-private partnership working to produce vaccines, drugs and tests to fight coronavirus -- the federal government has begun stockpiling vaccines and related supplies. It has charged panels of scientists and medical experts with deciding which Americans should get inoculated first.

But the federal government isn't buying up potential drugs in the same way it's pre-ordering vaccines, partly because it's harder to stock up on therapeutics when there are so many still being tested.

"Advanced purchasing of therapeutics is going to be slower," Dr. Janet Woodcock, a Food and Drug Administration official who leads therapeutics development for Operation Warp Speed, said in a recent media briefing. "We have to select the most promising ones. We can't just buy advanced purchases of 600 different agents."

US health experts have been particularly optimistic about the odds of monoclonal antibody treatments being effective, in part because the healthcare industry already uses such therapies to treat illnesses like HIV, asthma, Ebola and some types of cancer.

"If I had to pick one, I think the monoclonal antibody cocktails have a lot going for them because we know they worked for Ebola," National Institutes of Health Director Dr. Francis Collins told Congress last month. "There's all kinds of reasons to think this is the kind of virus it should work for, too."

Scientists studied early coronavirus patients to determine what kind of antibodies they produced to fight off the virus. Then, they mimicked those antibodies in a lab setting to create monoclonal treatments. The treatments aren't as long-lasting as vaccines and potentially wear off after a month or two. But they take effect quickly and are useful in temporarily protecting vulnerable populations or helping sick patients ward off the worst of the virus.

'How do you allocate this?'

Companies like Regeneron and Eli Lilly have already started ramping up production in the hopes their antibody treatments will prove effective. They're also conferring with others in the industry about pooling manufacturing resources if one or more treatments prove effective and are authorized by the government.

But it's no small feat to scale up production and the federal government has not made the kind of investment in manufacturing capacity for drugs as it has for vaccines.

"Obviously we are trying to get as many doses available as possible for as many people," Woodcock said in a July briefing, noting that across the globe there's limited capacity to manufacture monoclonal antibody treatments. "We have manufacturing experts in [Operation Warp Speed] who are really surveilling the whole field and seeing what we can do."

Regeneron believes it can potentially make tens of thousands of treatment doses per month or hundreds of thousands of preventative doses. Eli Lilly expects to produce roughly 100,000 doses this year.

Where those doses go is a question that will most likely fall to the federal government.

"The big challenge at that point is going to be making sure that the drug is distributed thoughtfully and is used in the way we can make the best possible use of the limited supply," said Adam Kroetsch, a co-author of the Duke study estimating the need for tens of millions of doses.

Marta Wosi?ska, another co-author of the study at Duke, noted that institutions like hospitals would be tempted to snap up more of the drug than they need, just to ensure they won't run out.

"You really need somebody to kind of say what is really needed and how do you allocate this?" Wosi?ska said. "Everybody has an incentive to just stockpile."

Operation Warp Speed "is focused on the development, manufacturing and distribution of FDA approved, safe and effective vaccines and therapeutics, not policy," Woodcock said in a written response to questions from CNN. "The allocation of any COVID-19 countermeasure that is in short supply will be a policy decision made by subject matter experts who receive input from external parties including medical ethicists."

Woodcock said the administration learned lessons from its distribution of remdesivir earlier this year, which left some hospitals with no doses and others with too many. "Every effort will be made to assure maximum transparency," said Woodcock, who added that the Centers for Disease Control and Prevention and the Department of Defense are working on plans to distribute vaccines and therapeutics.

While drug-makers aren't sure how the administration could allocate their products, executives insist they are committed to ensuring the distribution is fair and weighted toward the most vulnerable populations.

"I don't think we're going to have an auction market where people who can pay the most are going to get access to it," Regeneron's Schleifer said.

Skovronsky said he hoped the administration had learned some lessons from its previous distribution fumbles.

"We've watched I think, allocation distribution of other things during this pandemic...testing, PPE, masks, ventilators. All of those have been with controversy," he said.

But even setting aside fears of treatments going to the highest bidders or the most politically connected, there will still be early tradeoffs in deciding which of the most vulnerable Americans deserve the first doses.

Administering antibody treatments is also a challenge. Drug makers are looking at injecting the drugs through IVs or, in the case of preventative doses, possibly via syringe, similar to an insulin injection.

That's easy enough to do in a hospital setting. But senior homes, which have been ravaged by high infection and death rates during the pandemic, are ill-equipped. They don't have pharmacies or an abundance of IVs or enough staffers to provide infusions to every patient.

In order to pull off a clinical trial at Symphony Care Network's facilities across the Midwest, Eli Lilly brought in reinforcements.

The company set up RVs that are being outfitted as mobile pharmacies. It dispatched trucks full of equipment for IVs and infusions. And it provided staff to start the IVs, administer the infusions and follow up with patients.

"All those logistic elements will need to be addressed," said Dr. Alexander Stemer, an infectious disease expert and co-chair of Symphony's Covid-19 task force.

This week, the network of assisted-living homes identified its first outbreak and began briefing patients and staffers on the details of the clinical trial. A number of people have already enrolled.

"If Covid-19 is a 1,000 page textbook, we're on page five. And we are learning about this disease every day," said Dr. Alexander Stemer, an infectious disease expert and co-chair of Symphony's Covid-19 task force. "The positive of this study is that it gives the patients and the staff hope that they may be getting a treatment that can help."

There was widespread agreement, among experts, drug-makers and policymakers, that an effective antibody treatment could be a godsend for nursing homes in particular.

"The sense of doom and fright and death that's happening in these places is heartbreaking. So if we can, if we can change that, that's great," Eli Lilly's Skovronksy said. "And then we turn to other populations that are also vulnerable and work our way down."