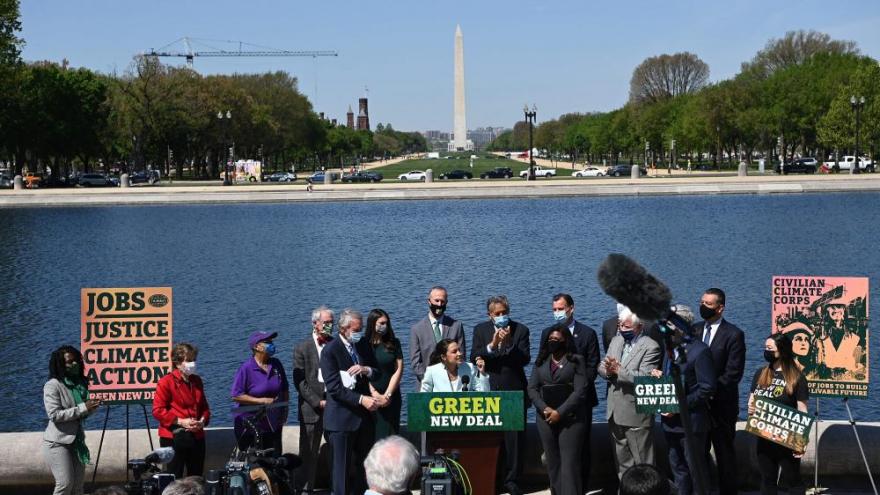 Representative Alexandria Ocasio-Cortez speaks during a press conference in Washington, DC on April 20.

(CNN) -- Progressives in the House were apprehensive when Joe Biden stepped into office -- the President was an unabashedly moderate Democrat and ready to cut deals with Republicans, many of whom he had known longer than some progressive members of Congress had been alive.

But those same liberals in the House have been struck after more than 100 days of the Biden presidency by just how much influence their caucus has had. Multiple progressives in Congress have told CNN they feel that they have more than just an ear with the White House, with multiple meetings, behind the scenes negotiations and a keen President resulting on what many believe was a win on the president's first priority -- a coronavirus relief package.

A series of looming fights hang over the détente between progressives and the Biden administration, however, and the recent backlash Biden received from progressives over failing to raise the number of refugees allowed into the United States underlines the tenuous nature of some of these relationships. Looming fights also include instituting a $15 minimum wage and what exactly gets included in Biden's final infrastructure package, both of which could present a sizable test of their relationships with the Biden administration.

With Democrats in the House operating with razor thin margins -- the party can only lose two votes or else legislation ends in a tie -- progressive power and the prospects of members withholding their votes will only further complicate the relationship between the White House and House progressives.

"The progressive candidate did not win the presidential nomination, and so we're working within that," Rep. Alexandria Ocasio-Cortez, a progressive Democrat from New York, told CNN. "But I don't know who would disagree with just saying that, like, a lot of people are surprised by how ambitious, how much more the Biden administration has delivered, compared to their expectation."

'A lot of goodwill'

For Rep. Ro Khanna of California, it is often easier to get in touch with White House Chief of Staff Ron Klain than members of his own family.

"It's pretty remarkable," the progressive congressman told CNN, adding that Klain's responsiveness is not unique to him -- he has heard the same from other progressives since Biden entered the White House.

The pair started working together after Vermont Sen. Bernie Sanders dropped out of the presidential race in April 2020 when Khanna, a former Sanders campaign co-chairman, joined unity task forces to negotiate with then-candidate Joe Biden over what could be adopted from Sanders' platform, which ultimately won over progressives to help deliver Biden the White House.

These relationships, said Khanna, helped the Biden administration when passing their first priority, a Covid relief package, even if the package did not include some key progressive priorities like a $15 minimum wage.

"I think that that first push with the American Rescue Plan bought a lot of goodwill because it was packed with progressive ideas and progressive framing," Progressive Caucus Chairwoman Rep. Pramila Jayapal, a Washington Democrat, told CNN.

Ocasio-Cortez echoed that sentiment -- "I think a lot of people thought the Covid bill was going to be worse, I'll be honest," she said -- but the progressive champion added that there were serious conversations about the caucus withholding their votes when a minimum wage hike was stripped from the overall package.

Ocasio-Cortez said the saga highlighted how progressives in the House are focused on "fights that we can win," an acknowledgment that overcoming the eight Democratic votes in the Senate opposed to a minimum wage was too high a bar for the caucus to defeat. But Ocasio-Cortez said she did seriously consider withholding her vote when Republicans tried to cut stimulus checks and change the threshold income that made individuals eligible, a fight in which progressives came out on top.

Progressives also argued that there was too much in the Covid relief package to hold up over the minimum wage fight.

"We didn't get the minimum wage, and we hated that," freshman progressive Rep. Jamaal Bowman told CNN. "We were organizing to potentially withhold then we decided not to because we needed to get resources into states."

And without the Covid relief package as a vehicle, the path forward for progressives to deliver on raising the minimum wage is a steep one. For Chairwoman Jayapal, there are three, equally challenging options: Overrule the Senate parliamentarian if she decides the provision cannot be included in the next spending bill; abolish the filibuster, which currently does not have the votes in the Senate; or attach the provision to a must pass bill that progressives would withhold their vote over. But progressives like Jayapal said their patience on minimum wage wouldn't last forever.

"They needed to get their Cabinet secretaries in place ... they needed the rescue plan to pass, but at some point, there's not going to be quite as much tolerance for a wait attitude on something that is so popular like the minimum wage," the Washington Democrat said.

How progressives walk that line between sinking legislation and getting in line behind the Biden administration could determine the Democratic President's success in the coming years.

And despite the warm feelings between House progressives and the Biden White House over the first 100 days in office, a minefield of issues loom over the relationship, highlighted most recently by the Biden administration's less-than-clear approach to Trump-era caps on refugees entering the United States.

The Biden administration announced earlier this month that they would not raise the refugee cap as high as he had promised, instead signing an emergency determination that kept the cap at 15,000 people. The decision drew swift and pointed blowback from across the political spectrum, but more vocally from progressives like Ocasio-Cortez and others.

"Biden promised to welcome immigrants, and people voted for him based on that promise. Upholding the xenophobic and racist policies of the Trump admin, incl the historically low + plummeted refugee cap, is flat out wrong," she said on Twitter. "Keep your promise."

The blowback was so fierce that Biden's administration backtracked, announcing hours later that they would set a new, increased refugee cap by May 15.

The Biden backtrack and progressive blowback could presage fights to come between the two sides and show that despite the positive feelings, acrimony is only one decision away.

"Despite campaign promises and early signs of a humane approach to immigration, they have failed to stop human rights abuses at the border, including keeping kids in cages," Minnesota Rep. Ilhan Omar, a former refugee herself, said in a statement to CNN. "I've also been disappointed with many of their early foreign policy decisions — whether refusing to hold Saudi Arabia fully accountable for the murder of Jamal Khashoggi and their ongoing deadly blockade of Yemen, or their refusal to lift draconian sanctions on Iran, Venezuela and others."

The most pressing of those looming fights -- and one that will be a test for the working relationship between the White House and House progressives -- is the Biden administration's latest push on reforming the nation's infrastructure.

The day after Biden first announced the package, progressives issued five top priorities for the caucus. Seventeen senators sent Biden a letter on Sunday asking him to include improvements to the health care system in the package, Ocasio-Cortez and others are trying to make the package more climate focused. And progressive lobbying efforts on the bill have continued behind the scenes.

Those progressive priorities have become the backbone of Republican attacks on the bill, arguing that the Biden proposal is too broad and focuses on far more than just infrastructure. So far, there has been little Republican support for the bill, as it was rolled out.

The question for lawmakers like Ocasio-Cortez, Bowman and others is whether the caucus is willing to withhold their needed votes if they don't get what they want in this package.

"People always go to that point of like, what is the line and where are you going to hold your votes and I always say, let us work to try to get it done," Jayapal said. "That's more important to me than just putting out a false deadline or a false line because I feel like we are still in that process."

Why progressives don't want to 'rest on their laurels'

The fate of the ongoing relationship between progressives and the White House becomes increasingly precarious when considering progressives are feeling the pressure of needing to deliver on their campaign promises made to voters ahead of the 2022 midterms.

A progressive lawmaker, who spoke on the condition of anonymity to speak openly about the deliberations with the White House, said the childhood tax credit in the Covid relief bill cannot be the only major legislative victory progressives bring back to their districts.

"That doesn't speak to the heart and soul of voters," the lawmaker told CNN. "The question is our side going to be fired up to turn out. And that's a challenge."

That pressure is especially potent for lawmakers who were elected by arguing that Washington politicians often fail to deliver on the promises they make on the campaign trail.

"We don't want anybody resting on their laurels because the first bill out the gate was okay," said Ocasio-Cortez, who was first elected by upsetting 10-term incumbent Joe Crowley in the Democratic primary. "I'm trying to push as much on this infrastructure package as possible because, yeah, this one Covid bill is not enough work to show for an entire two-year House term or four-year presidential term."

A key reason for that is because of pressure from outside progressive groups, many of whom have organized to both hold progressive leaders to their promises and push the Biden administration to listen to those progressive lawmakers. For example, the Green New Deal Network, which is comprised of 15 organizations located in all 50 states, hosted more than 200 events while the House was in recess in March to put pressure on lawmakers and the administration to pass a Green New Deal and incorporate its proposals in Biden's infrastructure package.

Working Families Party national director, Maurice Mitchell, whose organization is part of the Green New Deal Network, outlined how organizers are trying to capitalize on the ear that progressives have with the White House at the moment.

"It's clear that the Biden-Harris administration was listening" Mitchell said, referring to the organizing done that resulted in tangible progressive wins in the American rescue plan. "So, if they're listening to progressives and the grassroots, and people in frontline communities, why would we stop talking?"

With that mentality, Mitchell said he views the Biden administration "as a door not a destination. Meaning that our advocacy does not stop at the election, it actually really begins."

"Trust, meaning there's a general belief that the Biden White House genuinely wants to get there on things like a $15 minimum wage, massive investment in taking on climate change and canceling student debt," he said. "But, you know, it's up to organizing to ensure that the incentives are aligned for them to go bigger and faster."

For Jayapal, it's good that Biden has been more progressive than people had thought, but that hasn't just happened -- it's the product of hard work.

"I think everyone is surprised at how progressive he is," said the progressive caucus chairwoman. "That's not an accident."