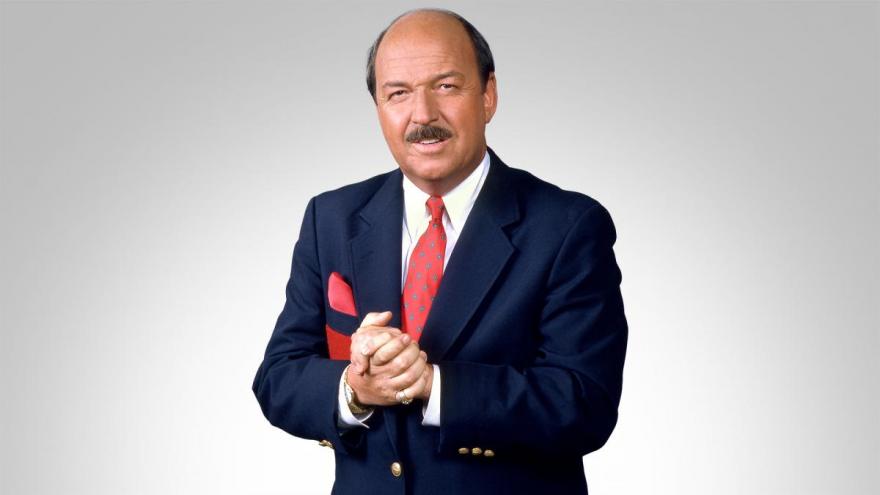 MINNEAPOLIS (AP) — Eugene "Mean Gene" Okerlund, whose deadpan interviews of pro wrestling superstars like "Macho Man" Randy Savage, The Ultimate Warrior and Hulk Hogan made him a ringside fixture in his own right, has died. He was 76.

World Wrestling Entertainment announced Okerlund's death on its website Wednesday. Okerlund's son, Tor Okerlund, told The Associated Press that his father died early Wednesday at a hospital in Sarasota, Florida, near his home in Osprey, Florida, with his wife, Jeanne, by his side.

Tor Okerlund said his father, who had received three kidney transplants, fell a few weeks ago "and it just kind of went from bad to worse."

Okerlund started as an interviewer in the Minneapolis-based American Wrestling Association. He moved to WWE in 1984 and hosted several shows, including "All-American Wrestling," ''Tuesday Night Titans" and "Prime Time Wrestling." Besides being WWE's lead locker room interviewer, he also provided ringside commentary.

Ventura told the Minneapolis Star Tribune on Wednesday that in an interview he "laughingly called him 'the Mean Gene Hot Air Machine,' and the 'Mean Gene' stuck."

Ventura called Okerlund "the best at what he did, the best straight man interviewer in wrestling history."

A native of Sisseton, South Dakota, Okerlund was known for his natty attire and mustache. He was inducted into the WWE Hall of Fame in 2006.

Okerlund also could sing and performed the national anthem at the first WrestleMania in 1985. He sang "Tutti Frutti" later that year on the WWE's "The Wrestling Album."

"He really was the ultimate, the consummate entertainer," his son said.

In a 2015 interview with the Star Tribune, Okerlund credited the late pro wrestling pioneer Verne Gagne for his start.

Okerlund worked in sales at the television station where Gagne's AWA was based and had experience in radio. Gagne approached Okerlund in the hallway when the regular interviewer could not make a taping in the early 1970s, Okerlund recalled.

"I said, 'Verne, I know zero about wrestling.' He said, 'Do you have a suit and tie? That's all you need.' There were a few bucks involved, so I dived in," Okerlund said.