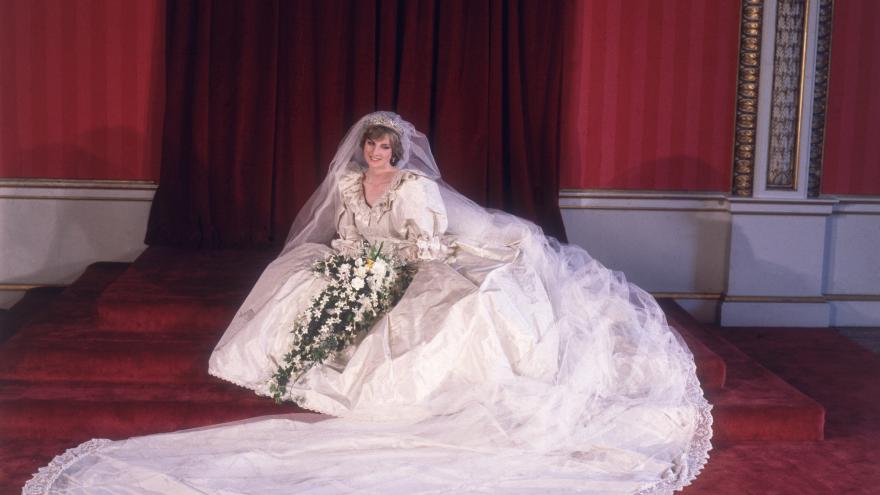 (CNN) -- Princess Diana's wedding dress will go on public display at Kensington Palace after her sons, Prince William and Prince Harry, agreed to loan the item.

Diana wore the famous dress -- which boasted a 25-foot train, the longest in royal history -- at her 1981 wedding to Prince Charles at St Paul's Cathedral in London.

The public can view the item from June at the royal residence in west London where Diana lived.

The dress, designed by David and Elizabeth Emanuel, features sequins encrusted along its lengthy train and an antique Carrickmacross lace that had originally belonged to Queen Mary, Diana's great-grandmother-in-law.

"Its gently scooped neckline and large puffed sleeves are trimmed with bows and deep ruffles of taffeta, a style popularized by the Princess in the early 1980s," Historic Royal Palaces (HRP) said while announcing the exhibition on Monday.

The dress belongs to Prince William and Prince Harry, who have loaned it to the palace for the display, HRP said.

The gown will be on show at Kensington Palace for the first time in 25 years, HRP added.

Named "Royal Style in the Making," the show will examine the relationship between designers and their royal clients.

The exhibition will also feature a rare toile that has survived from the 1937 coronation gown of Elizabeth, the Queen's mother and consort to King George VI.

Diana's fashion choices were eagerly observed by supporters and the media both during and after her marriage to Charles, with her elaborate wedding dress stunning royal fanatics in 1981.

Some of her dresses have been put up for auction, including a Disney-like ballgown that was also crafted by the Emanuels, her favorite designers.

In March, Meghan, Duchess of Sussex, wore Diana's bracelet during her tell-all interview with Oprah Winfrey.