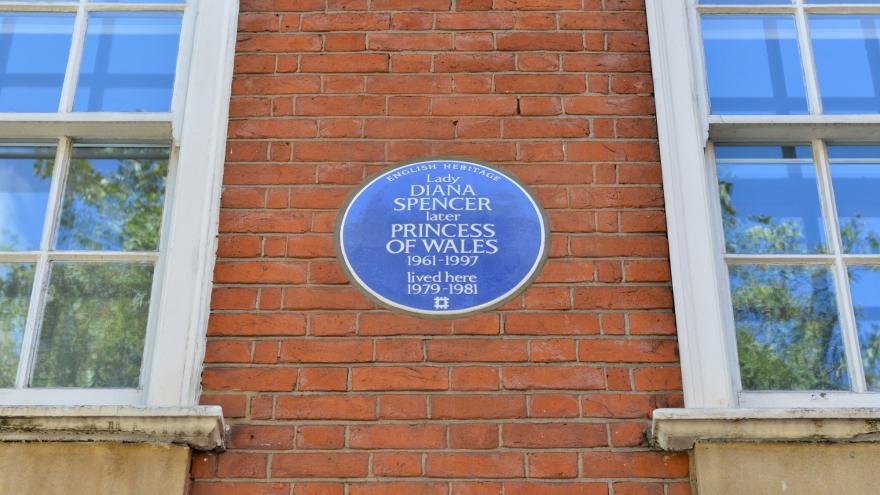 (CNN) -- The London apartment where Diana Spencer lived before she became the Princess of Wales has been commemorated with an official blue plaque.

The plaque was posted on the Coleherne Court building on Old Brompton Street in Kensington on September 29 following a successful campaign led by the London Assembly.

"Diana had, and still has, a very special place in the hearts of Londoners and we are thrilled to see her blue plaque formally placed as a monument to her work for others," said Andrew Boff, chair of the London Assembly, during the unveiling ceremony.

The two years Diana spent in Flat 60, Coleherne Court, were formative ones. She purchased the apartment with money inherited from her great-grandmother. The price was £50,000 ($67,000).

Diana moved to London at age 18 and worked as a nanny and at a kindergarten. She began dating Prince Charles, heir to the British throne in 1980, and they were engaged a year later.

As her public profile grew, Coleherne Court was regularly besieged by photographers who hoped to capture pictures of the future princess. After Diana got engaged to Prince Charles, her mother had the apartment sold. It is still a private residence today.

"Lady Diana Spencer, later the Princess of Wales, is one of the most iconic figures in recent British history," said a statement issued by English Heritage, a charity that manages over 400 of England's historic buildings, monuments and sites.

"Her troubled marriage to Prince Charles and later relationships were the subject of fevered and intrusive press coverage, but she won a lasting reputation outside her personal life for her extensive charity and humanitarian work."

The blue plaque is the second significant memorial to Diana unveiled in 2021, the year in which she would have turned 60. In July, her sons Prince William and Prince Harry jointly revealed a statue of their mother at the Sunken Garden at Kensington Palace.

These plaques are placed on buildings in England that are connected to important historical figures and are maintained by English Heritage. "Blue plaque spotting" is a popular hobby for sightseers and history buffs.

The plaques acknowledge a range of politicians, artists, writers and other important historical figures, including Virginia Woolf, Winston Churchill and Freddie Mercury.

Notable figures do not need to be British in order to be honored with a plaque. Foreigners who spent time living in the U.K., like Mahatma Gandhi and Emile Zola, have also been acknowledged.

There are some 950 blue plaques in London alone.