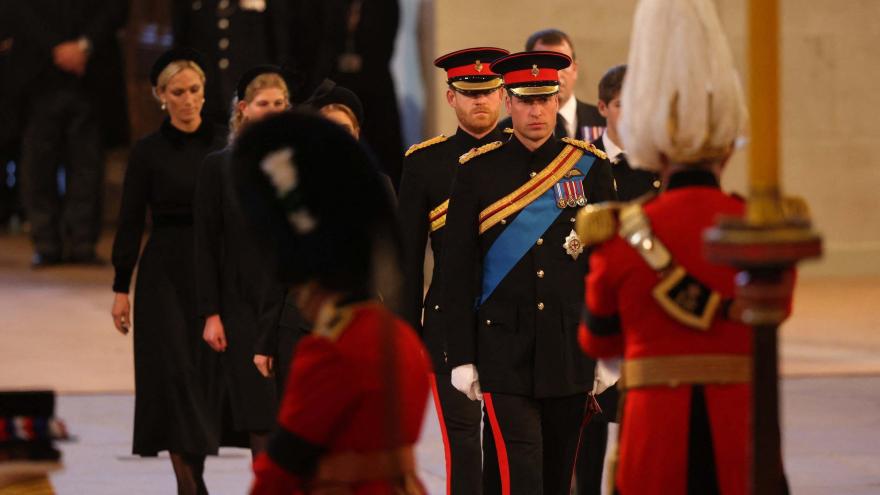 (CNN) -- Prince William, Prince Harry and Queen Elizabeth II's other grandchildren held a vigil at her lying in state on Saturday, as the royal family prepares to bid farewell to the late monarch at her state funeral.

The brothers stood watch for 15 minutes over the Queen's coffin in Westminster Hall, where it has been displayed to the public since Wednesday.

They were joined by Princess Anne's children Zara Tindall and Peter Phillips, Prince Andrew's daughters Princesses Beatrice and Eugenie, and Lady Louise and Viscount Severn, who are the children of Prince Edward. The Earl and Countess of Wessex were present to support their children as Louise and James are comparatively younger than their cousins, a royal source told CNN.

Harry wore military uniform during the appearance at the request of King Charles III, a royal source previously told CNN. As a non-working member of the royal family, he has appeared at other events in a morning suit.

The grandchildrens' vigil followed a similar appearance by Charles and his siblings on Friday. It comes two days before the Queen's state funeral on Monday. The monarch died on September 8 after a 70-year-reign, prompting a lengthy period of mourning and a number of commemorations around the country.

William and Harry have set aside long-running tensions to make joint appearances at some events. A walkabout by the brothers and their wives Catherine, Princess of Wales and Meghan, Duchess of Sussex, in Windsor last weekend came as a surprise and was not announced in advance. William invited the Sussexes to see memorials left for the Queen and greet well-wishers, a source told CNN.

Princess Beatrice and Princess Eugenie issued a joint statement Saturday thanking their "dear Grannie" and "beloved Queen" and expressing their sorrow at her passing.

"We, like many, thought you'd be here forever. And we all miss you terribly," the daughters of Prince Andrew said in a statement released by Buckingham Palace.

"You were our matriarch, our guide, our loving hand on our backs leading us through this world. You taught us so much and we will cherish those lessons and memories forever. For now dear Grannie, all we want to say is thank you," Eugenie and Beatrice said. "The world mourns you and the tributes would really make you smile. They are all too true of the remarkable leader you are," the sisters added.

"We're so happy you're back with Grandpa. Goodbye dear Grannie, it has been the honour of our lives to have been your granddaughters and we're so very proud of you," the statement said.

Earlier on Saturday, King Charles and Prince William, the Prince of Wales, greeted members of the public queuing to see the Queen's lying in state on Saturday on a surprise walkabout in London.

The royals were spotted shaking hands with well-wishers near Lambeth Bridge. Prince William appeared to be in high spirits as he talked to the crowd and asked several people how long they had been waiting.

Some mourners shouted "hip hip hooray" and "God save the King" as Charles passed.

One woman held up a Paddington Bear toy to Charles; the fictional bear has become associated with the Queen since she appeared in a sketch alongside the character during her Platinum Jubilee celebrations.

People have been queuing for hours to view the Queen Elizabeth II's coffin since she began lying-in-state at Westminster Hall on Wednesday.

Charles III also visited Metropolitan Police headquarters in the Lambeth borough of London to thank police and emergency services officials involved in the planning and implementation of events since the death of the late Queen.

Monday's funeral for the Queen will be the "largest single policing event" that London's Metropolitan Police force has ever undertaken, Deputy Assistant Commissioner Stuart Cundy said during a media briefing on Friday.

On Sunday, King Charles will host a reception at Buckingham Palace for "Heads of State and official overseas guests" ahead of the state funeral for the late Queen.

The Duke and Duchess of Sussex, Prince Harry and Meghan, received an invitation to that reception by mistake, a source with knowledge of what happened told CNN.

As an official state occasion, the Palace said the King would be accompanied by working members of the royal family only. The source told CNN that they "imagined" that an administration error had occurred. The couple was not "disinvited" from the reception, as some media outlets have reported.