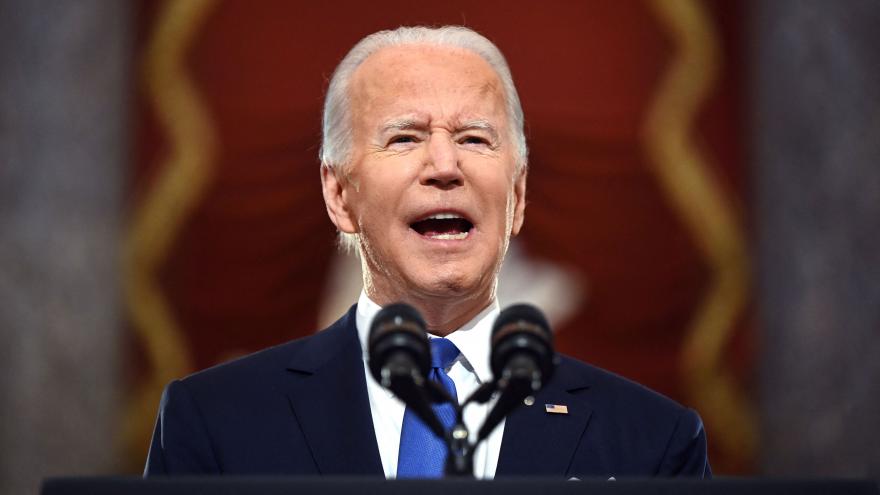 (CNN) -- Pressure is intensifying on President Joe Biden to articulate a plan to enact meaningful voter protections as a counter to strict new voting laws going into place around the nation after warning for the past year of nascent dangers to democracy.

Biden heads to Atlanta on Tuesday to make an urgent new case for voting rights legislation as Democrats prepare to advance two new bills that will require a weakening of Senate filibuster rules in order to pass -- a step Biden is prepared to endorse.

Coming at a critical moment, the day is meant, in part, to quiet criticism that the President hasn't done enough to break a congressional logjam. That criticism is growing louder after a coalition of voting rights groups annoced Monday they would be boycotting the President's speech.

The two measures -- the Freedom to Vote Act and the John Lewis Voting Rights Advancement Act -- would jointly bolster voting protections by, among other things, creating national standards for mail-in voting and restoring some stripped-out elements of the Voting Rights Act. Biden's speech at the Atlanta University Center Consortium, on the grounds of the historically Black institutions Clark Atlanta University and Morehouse College, will work to galvanize support behind the bills as they come up in the Senate.

Democrats in Congress are preparing to advance the bills ahead of this year's midterm elections, but -- with nearly all Republicans opposed -- the measures' only chance of success is to alter the Senate's filibuster rules.

Activists and some of Biden's allies are worried there is little hope of convincing the remaining Democratic holdouts -- centrist Sens. Joe Manchin of West Virginia and Kyrsten Sinema of Arizona -- to go for the rule changes and are growing increasingly frustrated with Biden for not breaking the impasse.

Paired with his sharpest-to-date denunciation last week of his predecessor for fomenting lies about the 2020 election, the address Tuesday in Atlanta marks a distinct new focus for the President as he enters his second year in office.

Ahead of his visit, some voting rights groups in Georgia voiced skepticism at the President's approach. A consortium of organizations wrote in a statement they would "reject any visit by President Biden that does not include an announcement of a finalized voting rights plan that will pass both chambers, not be stopped by the filibuster, and be signed into law."

"Anything less is insufficient and unwelcome," the statement read.

Biden will be flanked by some Georgia elected officials on Tuesday. Sen. Jon Ossoff, who won his seat in 2020, will attend the event, a spokesperson for the senator said. Sen. Raphael Warnock, a Georgia Democrat who is up for reelection in 2022 after winning a two-year term alongside Biden and Ossoff in 2020, also will attend the presidential event, according to a representative for his Senate office.

"Our democracy is in peril and time is running out," Warnock said. "This is a moral moment, and if leaders in Washington fail to protect the voices and the votes of the American people, then we have fallen way short of our responsibilities. It's time to act."

Prominent Georgia leader Stacey Abrams -- arguably the Democratic Party's preeminent voting rights advocate after using her 2018 gubernatorial loss to Republican Brian Kemp to elevate the issue -- will not attend Biden's speech due to a conflict, a spokesman said

While it's not clear if the President will lay out that specific path, Biden will "describe this as one of the rare moments in a country's history when time stops and the essential is immediately ripped away from the trivial," White House press secretary Jen Psaki said Monday. "We have to ensure January 6 doesn't mark the end of democracy, but the renaissance for our democracy."

Biden's aides said he wasn't planning to concentrate on Trump again in Atlanta, believing last week's speech marking the anniversary of the January 6 US Capitol riot was a more appropriate venue to unleash his scathing criticism of his predecessor. But he does plan to home in on some of the same lines of critique he used in that address, including attacking Republicans for trying to reckon with the 2020 election results by tightening voting laws.

"Instead of looking at the election results from 2020 and saying they need new ideas or better ideas to win more votes, the former President and his supporters have decided the only way for them to win is to suppress your vote and subvert our elections," Biden said inside the Capitol. "It's wrong, it's undemocratic and, frankly, it's un-American."

Biden to detail support for changes to the filibuster

The President has already stated he would back a rule change on the filibuster to pass voting rights bills -- a significant acknowledgment for a longtime denizen of the Senate. But he hasn't specified exactly the parameters for the changes or laid out his reasoning in extensive detail.

On Tuesday, he is preparing to spell out more clearly what those changes could look like, according to people familiar with his plans. Biden has previously stated he would support a return to the "talking filibuster," which requires a senator to remain speaking in the Senate for the duration.

Biden's allies hope more forceful support for the filibuster revisions and a renewed focus on the voting issue can help sway the two Democratic holdouts to support the changes. But the likelihood of bringing Manchin or Sinema around appears low. Both have stated they oppose changes to the 60-vote threshold to pass legislation.

Biden has been phoning senators over the past several weeks to discuss voting rights and to identify a pathway to passage, according to people familiar with the matter. After it became evident late last year that the President's Build Back Better bill wouldn't be passed in the near-term, Democrats began prioritizing voting rights legislation, setting a deadline of Monday's Martin Luther King Jr. holiday.

"My sense is that with the White House, the game plan originally was to pass the rescue plan, pass the infrastructure plan and pass Build Back Better. They got two out of three and stymied on Build Back Better. So this definitely reflects a necessary and needed pivot by them to focus on democracy and focus on voting rights," said Marc Morial, the president of the National Urban League.

"I feel like we're on the 1-foot line. And then sometimes I feel like we're 50 yards away," Morial told CNN. "We have been encouraging the White House for many months to use the full weight of the presidency" to get behind the voting bills.

Biden has delivered previous speeches on voting rights -- including in Tulsa, Oklahoma, on the centenary of the race massacre there and more recently at a commencement address in South Carolina -- but hasn't spelled out a distinct vision for overcoming Republican opposition to the proposed revisions.

"We don't need another speech. What we need is a plan," Cliff Albright, co-founder of the Black Voters Matter Fund, told reporters on Monday. "We won't be attending the speech that the President is giving tomorrow."

Instead of attending the President's speech, Albright said, the groups will be continuing their work to advance voting rights in the state and plan to deliver a response to Biden's message on Tuesday.

"Right now in Georgia, organizations are busy fighting attacks against Black voters, Brown voters and voters all throughout the state of Georgia, from election board members to poll closers and even extreme racial gerrymandering," said James Woodall, former president of the Georgia NAACP. "The legislation that is currently pending both in Congress and the state legislature is our utmost priority and what we need is complete support from this administration to be able to support our democracy."

Many voting rights advocates have lamented that Biden chose to focus so intently on other areas of his agenda during his first year in office. LaTosha Brown, co-founder of Black Voters Matter, who has sat with both Harris and Biden on the issue last year, said she didn't believe Biden has made passing voting rights legislation a "priority."

"I've not seen evidence that the President has prioritized this. So hopefully tomorrow will be a change; it's never too late," she told CNN on Monday.

Brown said she did not believe she would be attending the President's speech, "but we're way beyond speeches. At this point, I'm looking for a strategy and I'm looking for a commitment and that he is going to get this passed."

Brown said she was disappointed at how long it's taken the administration to take this issue seriously: "White voters get priority, Black voters get promises."

Harris encouraged to do more

The vice president's office has been lobbied by Democratic donors to increase her efforts on the issue, arguing her voice should be a louder part of the campaign to get something done, according to a source familiar with the matter, who said the pressure increased toward the end of last year after the sweeping spending plan faltered.

The latest push on the issue will also include a renewed focus on corporations and chief executives, many of whom have spoken out in support of passing new voting rights protections. A source familiar with planning said the vice president's office had discussed organizing a roundtable with CEOs on the issue.

Throughout her time in office, Harris has used her role for a series of speeches and meetings that have brought together prominent Black women, civil rights activists, poll workers and election officials to signal her commitment. For her, officials described voting rights as a nearly "24/7" issue.

"Her very presence as vice president underscores the journey we've been on to improve democracy and to expand democracy," Morial said. "And why should we allow it to be retrenched right now? And I think she should be fully engaged or unleashed in this fight."