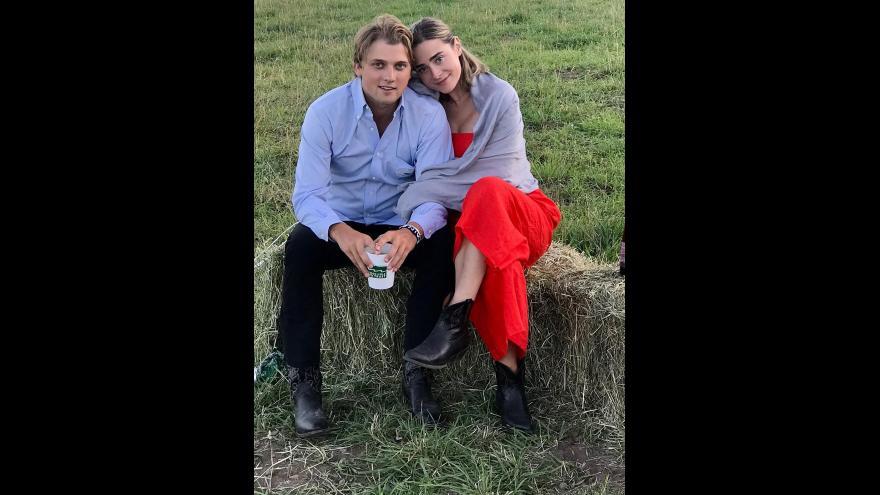 The eldest grandchild of President Joe Biden and first lady Jill Biden, Naomi Biden, has announced she will be married in a ceremony on the White House's South Lawn later this year.

(CNN) -- The eldest grandchild of President Joe Biden and first lady Jill Biden has announced she will be married in a ceremony on the White House's South Lawn later this year.

In a tweet Thursday, Naomi Biden provided an update to her nuptial plans.

"Sooo not sure how best to update but was supposed to do so weeks ago...but we have finally figured out where the ceremony will be...and much to the relief of secret service and with the dogs' endorsement...we'll be getting married on the South Lawn!" she said on Twitter. "Couldn't be more excited."

Naomi Biden in April said she and fiancé Peter Neal would only be holding their wedding reception at the White House, with a ceremony to take place elsewhere. However, now Naomi Biden says her wedding plans have shifted to take place fully at 1600 Pennsylvania Avenue.

The South Lawn can function as a ceremonial venue for certain official state visits, and it is the predominant take-off and landing point for Marine One, the presidential helicopter that ferries the President to and from various locations. It has not been, as of yet, been the site of a modern presidential familial wedding ceremony.

White House press secretary Karine Jean-Pierre told reporters on Thursday that taxpayer funds would not be used for the wedding ceremony. She would not say whether the press would be granted access to the event.

"I can ensure to you that taxpayer dollars will not go to that," she said at the press briefing. "That is a personal affair that is happening. That is not White House business, so I cannot speak to that from here."

Naomi Biden, 28, is the daughter of Hunter Biden and Kathleen Buhle. She is a lawyer, currently based in Washington, DC. Biden got engaged to Peter Neal, 24, in September of last year when Neal proposed near his childhood home in Jackson Hole, Wyoming, according to a White House official.

Biden's engagement ring includes the band of Neal's grandmother's engagement ring. The couple has been together for approximately four years, after meeting in New York City on a date that was set up by a mutual friend. Neal graduated from law school this spring at the University of Pennsylvania.

The White House has a long history as the location for weddings of presidential offspring, dating back to the 1800s, when the children of James Monroe, John Quincy Adams, John Tyler and Ulysses S. Grant were married there. Both of Woodrow Wilson's daughters held their weddings at the White House, as well as his niece, in 1913, 1914 and 1918, respectively.

More recently, Lynda Bird Johnson, daughter of Lyndon B. Johnson, was married in the White House East Room in 1967. Her sister, Luci Johnson, held her reception at the White House the year prior, following a ceremony at a nearby church.

Tricia Nixon was walked down the aisle in the Rose Garden by her father, Richard Nixon, when she married Edward Cox in 1971.

In June 2008, George W. Bush and Laura Bush hosted a White House wedding reception with 600 guests for their daughter, Jenna Bush, whose wedding ceremony had occurred the month prior at the Bush family ranch in Crawford, Texas.