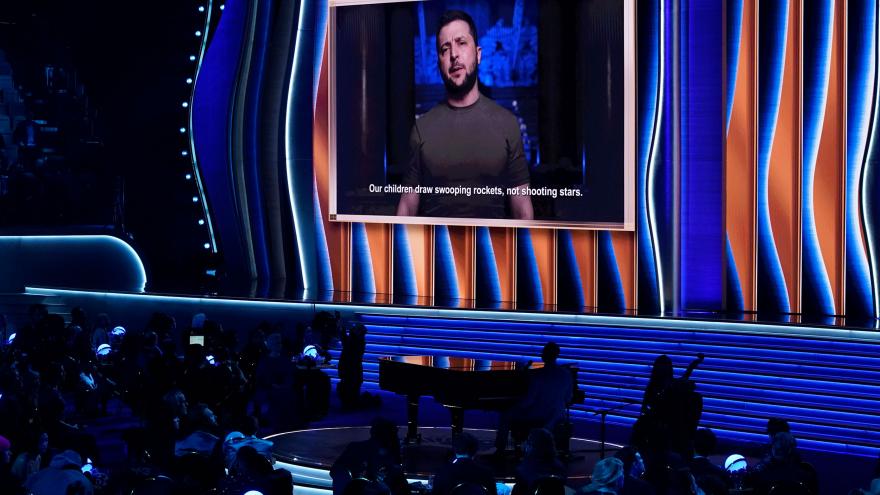 (CNN) -- The President of Ukraine brought a touching moment to the 64th annual Grammy Awards Sunday.

President Volodymyr Zelensky offered a speech that began "The war. What's more opposite than music."

"The silence of ruined cities and killed people. Our children drew swooping rockets, not shooting stars," he said. "Over 400 children have been injured and 153 children died. And we will never see them drawing."

Zelensky has been outspoken in gathering international support for his country since it has been invaded by Russian military forces in February.

He tied that to the music industry's biggest night by saying, "The war doesn't let us choose who survives and who stays in eternal silence."

"Our musicians wear body armor instead of tuxedos," he said."They sing to the wounded. In hospitals."

He added that "the music will break through anyway" and spoke of his country defending its freedom "To live. To love. To sound."

Zelensky implored those listening to "Tell the truth about war. On your social networks. On TV. Support us in any way you can. Any. But not silence."

"And then peace will come. To all our cities the war is destroying," he said. "Chernihiv, Kharkiv, Volnovakha, Mariupol and others. They are legends already. But I have a dream of them living. And free. Free like you on the Grammy stage."

His speech was followed by a performance led by singer John Legend and several Ukrainian artists of Legend's song "Free."