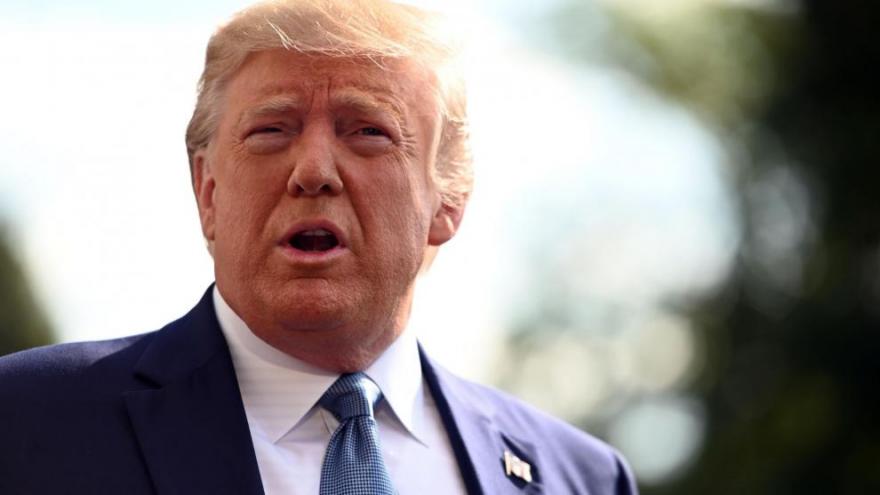 **This image is for use this this specific article only** President Donald Trump confirmed Sunday morning that ISIS leader Abu Bakr al-Baghdadi was killed in a US military raid in northwest Syria over the weekend.

(CNN) -- President Donald Trump declared Sunday morning that ISIS leader Abu Bakr al-Baghdadi was dead after a US military raid in northwest Syria over the weekend.

The President said a US special operations forces mission went after the ISIS leader and there were no US deaths during the operation.

Several ISIS fighters and companions of Baghdadi were killed, including two women wearing suicide vests and three children. Trump would not provide a specific number of casualties, only describing those targeted on scene as "more dead than alive." Eleven children were moved out of the house and are uninjured, the President said.

The death of Baghdadi marks the culmination of a years-long hunt to find one of the most wanted terrorists in the world and the man who declared a so-called Islamic caliphate in Iraq and Syria in 2014. But it also comes as the US military is pulling back in Syria, a move analysts warn could allow for an ISIS resurgence.

The President said "immediate" and "totally positive" test results proved it was Baghdadi, saying a lab technician on the scene of the raid confirmed the ISIS leader's death.

Trump described the situation, saying the ISIS leader "spent his last moments in utter fear, in total panic and dread, terrified of the American forces bearing down on him."

The President said US forces obtained "highly sensitive material and information from the raid, much having to do with ISIS — origins, future plans, things that we very much want."

Trump told reporters Baghdadi was under surveillance for a couple of weeks and that two to three planned missions were scrapped before the successful one was launched.

The US flew over certain Russian airspace during the mission, he said.

The President said he watched the operation from the White House Situation Room beginning at 5 p.m. The mission, he said, began shortly thereafter and went on for about two hours. He was accompanied by Vice President Mike Pence, National Security Adviser Robert O'Brien, Secretary of Defense Mark Esper, Chairman of the Joint Chiefs of Staff U.S. Army General Mark A. Milley, and Brig. Gen. Marcus Evans, Deputy Director for Special Operations, according to Assistant to the President Dan Scavino.

CIA Director Gina Haspel did play a role in the operation on Saturday, according to a source familiar with the matter. She would have been monitoring from CIA headquarters and in touch with the Situation Room, similar to how then-CIA Director Leon Panetta was positioned during the Osama bin Laden operation.

Acting Director of National Intelligence Joseph Maguire was not in the Situation Room either, but an ODNI spokesperson said Maguire was "fully aware and engaged in the planning. For the operation itself, he was out of town due to a pre-arranged engagement but watched with the CENTCOM commander."

"Last night was a great night for United States and for the world," the President said. He described in sometimes brutal terms how al-Baghdadi died.

He said the leader, "spent his last moments in utter fear... terrified of the American forces bearing down on him." He described Baghdadi as, "crying, whimpering, screaming, and bringing three kids with him. To die. Certain death."

Baghdadi's body may be disposed at sea, a source familiar with the matter told CNN. O'Brien told NBC's "Meet the Press" Sunday that he expected the US to follow the same protocol as Bin Laden, who was killed in a 2011 raid in Pakistan by US Navy SEALs and was buried at sea.

Baghdadi's body, O'Brien said, "will be disposed of properly." When asked if the US would follow the same protocol as Bin Laden, O'Brien said, "I would expect that to be the case."

Key Democrats not informed of raid

The President said he informed a few members of Congress of the raid ahead of his announcement, including Republican Sen. Lindsey Graham, who sits on the Foreign Relations Committee, and Republican Sen. Richard Burr, who chairs the Senate Intelligence Committee. Trump said he did not inform key Democrats, including House Speaker Nancy Pelosi and Senate Minority Leader Chuck Schumer. Trump said a leak of the raid could have cost American lives.

Pelosi's office confirmed to CNN's Manu Raju there was no notice given ahead of the raid to it.

"This month, the House passed a joint resolution on an overwhelmingly bipartisan 354-60 basis which rejects President Trump's green-lighting of Turkish aggression into Syria against our Kurdish partners, and calls on him to present a clear strategy to defeat ISIS," Pelosi said in a statement issued Sunday. "The House must be briefed on this raid, which the Russians but not top Congressional Leadership were notified of in advance, and on the Administration's overall strategy in the region. Our military and allies deserve strong, smart and strategic leadership from Washington."

Schumer said at an unrelated press conference in New York City Sunday that he learned about Baghdadi's death by seeing it on television.

"I didn't know. I saw it on TV," Schumer said. When asked for his reaction to the news, Schumer added, "My reaction? Look, it's great that we've gotten al-Baghdadi and killed him. He's a dangerous man, an evil man. The fight against ISIS has to continue."

Trump said it was a "very dangerous mission," regarding flying in and flying out. He thanked Russia, Turkey, Syria, Iraq and Syrian Kurds for helping in the mission.

But the Russian military on Sunday questioned the official US account of the raid, saying it was not aware of any US military operations in the region.

During the mission, he said, US service members were met with local gunfire, which was eliminated.

Trump also said the raid does not impact his decision to withdraw troops from Syria.

"We don't want to keep soldiers between Syria and Turkey for the next 100 years. They've been fights for hundreds of years. We're out but we are leaving soldiers to secure the oil. Now we may have to fight for the oil. That's OK," Trump said.

The statement is a shift from what Esper said Friday, that the "core mission" in Syria "remains what the mission in Syria began with, it's always been about defeating the ISIS coalition."

O'Brien told "Meet the Press" that the raid, which led to Baghdadi's death, was named after Kayla Mueller, an American who was killed in 2015 while being held hostage by ISIS.

On Thursday, Trump and Pence were told there was a high probability he was in the compound, Pence said. Trump then directed his military commanders to develop options. Options were presented at a Friday morning meeting. Actionable intelligence allowed the President to make the decision to move forward with the raid on Saturday morning, Pence said.

Esper told CNN's "State of the Union" Sunday morning that the President approved the raid "late last week" after being presented with different options. The objective, Esper said, was capturing Baghdadi or if necessary, killing him.

"He reviewed them, asked some great questions, chose the option that we thought gave us the highest probability of success and confirmation that the head of ISIS would be there and either captured and killed and then we executed from there," Esper said.

The defense secretary also relayed that US forces told Baghdadi to surrender during the raid but he refused, disappearing down into a subterranean area.

Turkish President Recep Tayyip Erdogan also described Baghdadi's death as an important development in the fight against ISIS, saying in a Sunday tweet that it "marks a turning point" in the effort.

"Turkey will continue to support anti-terror efforts -- as it has done in the past," Erdogan said. "I am confident that a decisive struggle against terrorism, in line with the spirit of alliance, will bring peace to all of humanity."

Esper added that "we're going to watch carefully next steps. And as a new leader and leaders pop up we'll go after them as well."

Esper described the death of the ISIS leader as a "devastating blow" to ISIS. "This is not just their leader, it's their founder. He was an inspirational leader in many ways," Esper told Tapper. Esper also ABC News' "This Week" on Sunday that "less than 100" troops were on the ground for the raid on Baghdadi though, "these are always much bigger operations, the tail of which stretches back deep into the intelligence community."

White House chief of staff Mick Mulvaney was not present in the Situation Room while Trump and top officials monitored the raid.

Mulvaney was out of town due to a family matter, the official said.

Diane Foley, the mother of the late James Foley, an American journalist who was abducted in 2012 by ISIS and later brutally murdered by the group, welcomed the news of Baghdadi's death, saying Sunday that she's "grateful" to Trump and the US military.

"I hope this will hinder the resurgence of terror groups and pray that captured ISIS fighters will be brought to trial and held accountable," Foley, who serves as the president and founder of the James W. Foley Legacy Foundation, said in a statement.

CNN reported early Sunday morning that Baghdadi was believed to have been killed in the raid, according to a senior US defense official and a source with knowledge. The final confirmation was pending while DNA and biometric testing is conducted, both sources told CNN. The CIA assisted in locating the ISIS leader, the defense official said.

Baghdadi became the leader of Islamic State of Iraq (ISI) in 2010. In 2013, ISI declared its absorption of an al Qaeda-backed militant group in Syria and Baghdadi said that his group would now be known as Islamic State in Iraq and the Levant (ISIL or ISIS).

Baghdadi has been in hiding for the last five years. In April, a video published by the ISIS media wing al-Furqan showed a man purporting to be Baghdadi. It was the first time he had been seen since July 2014, when he spoke at the Great Mosque in Mosul.