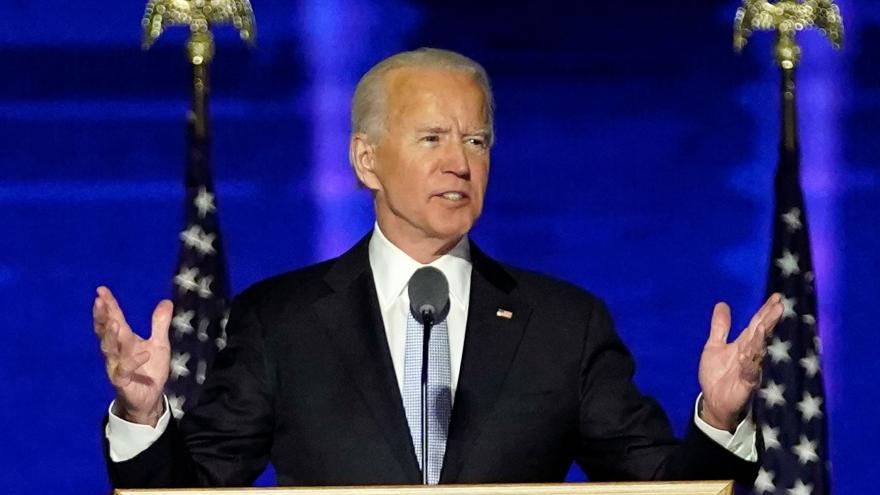 President-elect Joe Biden and Vice President-elect Kamala Harris were joined on stage following their speeches in Wilmington, Delaware, tonight by their families.

(CNN) -- President-elect Joe Biden spoke to a deeply divided nation tonight, making a plea for unity and understanding after four years of turmoil and conflict fomented by President Donald Trump, who showed no indication Saturday that he plans to concede and continued to push the falsehood that he had won the election.

Speaking in his hometown of Wilmington, Delaware, Saturday evening, The President-elect reached out to voters who supported Trump. "I understand the disappointment tonight. I've lost a couple of times myself. But now, let's give each other a chance," Biden said. "This is the time to heal in America."

Biden said he was humbled by the trust and confidence that America has placed in him.

"I pledge to be a president who seeks not to divide, but unify, who doesn't see red states and blue states, but only sees the United States."

"I sought this office to rebuild the soul of America, to rebuild the backbone of this nation, the middle class and to make America respected around the world again," Biden said.

Vice President-elect Kamala Harris introduced her running mate, invoking the legacy of the late Georgia Congressman John Lewis and praising the campaign's supporters for turning out in record numbers. She said voters had chosen hope, science and truth by selecting Biden as the next president, calling him a "healer and a uniter."

"When our very democracy was on the ballot in this election, the very soul of America at stake, and the world watching you," Harris said, "you ushered in a new day for America."

Kamala also credited Biden for taking the risk of choosing a woman as his running mate: "While I may be the first woman in this office, I will not be the last, because every little girl watching tonight sees that this is a country of possibilities."

The former vice president stepped up to the microphone in his hometown to outline his plans to address the grave challenges gripping this country in the midst of a pandemic that has claimed more than 235,000 American lives and cost millions their jobs.

When the campaign started nearly two years ago, it would have been extraordinary to think that Americans would show up to a victory rally wearing masks. The fact that they had to, and at a drive-in event outside in November, were a reminder of the moment of national extremis that Biden and Harris will inherit in January.

As he prepared for that victory speech,jubilant celebrations erupted in big cities across America, with supporters pouring into the streets -- shouting, chanting, singing, dancing and waving flags as drivers honked their horns -- to mark his victory and the end of Trump's presidency. With Biden's win, Harris will make history as the first woman -- and the first Black person and first South Asian -- to serve in that office.

Those celebrations began near the White House on Saturday while Trump was golfing in Virginia -- forcing the smoldering President to wind his way back to 1600 Pennsylvania Avenue in his motorcade through those crowds after hitting the links. There was no sign that Trump would offer a concession to Biden or even extend the traditional invitation for a White House visit to the President-elect as he continues to falsely maintain that the election was stolen from him.

In tweets Saturday, Trump again baselessly impugned mail-in ballots, which overwhelmingly tipped the election in Biden's favor, and repeated the falsehoods on Twitter that he "WON THE ELECTION." He claimed "bad things happened" in the election that his poll observers were not allowed to see, even though there is no evidence that GOP poll watchers were systematically shut out of the process anywhere in the country.

"71,000,000 Legal Votes. The most EVER for a sitting President!" Trump tweeted Saturday afternoon. (While the popular vote tally was continuing to rise for both men as ballots were counted Saturday, Biden had won 74.5 million votes and Trump had won 70.4 million votes).

Trump's campaign team is expected to continue its effort to dispute the election results with a next round of lawsuits Monday, but so far they have been unable to point to any credible instance of voter fraud that would alter the outcome of the race.

It is not clear how isolated instances of irregularities, even if found, would add up to a case with sufficient legal questions to make it all the way to the Supreme Court or would challenge the integrity of an election that Biden looks set to eventually win with sufficient electoral votes, which would make challenges in individual states unlikely to alter the national result.

The legal front looks increasingly like a rallying point for partisans keen to prevent Biden's presidency from being seen as legitimate by Trump supporters and as a face-saving way for the President himself to explain his defeat. Renowned Republican election lawyer Benjamin Ginsberg said that there was no sign that the President had any case that could change the result of the election. He told CNN's Erin Burnett that there was so far "no evidence of the systemic fraud or irregularities to cast any of the results in any of the states into doubt."

The White House signaled that the public was unlikely to see the President soon after he returned from playing golf Saturday afternoon, but he was well within earshot of the crowds clamoring for his exit in Washington, DC.

One joyful gathering was directly across from the White House in Black Lives Matter Plaza, near where the Trump administration enraged activists in June by clearing peaceful protesters with pepper balls, flashbangs and rubber bullets during a demonstration against police brutality shortly before Trump walked across the street for a photo op while holding a Bible in front of historic St. John's Church.

While Trump may not accept that he has lost, many world leaders did on Saturday as they sent congratulatory messages to Biden and Harris.

In a sign of how quickly global realities shift after a US election, even some leaders who had courted Trump, including British Prime Minister Boris Johnson, rushed to congratulate the President-elect.

In perhaps the most notable message, India's nationalist Prime Minister Narendra Modi, who had appeared at huge campaign-style rallies with Trump in India and the United States, tweeted a picture of Biden leaning in to whisper in his ear during a previous meeting. Modi sent a separate tweet congratulating Harris and noting her Indian heritage, saying her success was a great source of pride for Indian Americans and her "chittis" -- a Tamil term of endearment that has been used by the vice president-elect.

A complex governing challenge ahead

Many prominent Republicans remained silent on Saturday, but there were a few exceptions, including former Florida Gov. Jeb Bush -- who lost the nomination to Trump in 2016 -- and Utah Sen. Mitt Romney, the 2012 Republican nominee. Trump's failure to concede and congratulate his opponent may have suppressed normal courtesies from Republican leaders who remain intimidated by him and dependent on the President's base for their reelection prospects in 2024.

Though Biden pulled off an impressive feat by dispatching an incumbent president and rebuilding the Democrats' "blue wall" in the Midwest, he is keenly aware of the enormous governing challenge facing him given his slender margin of victory in key swing states. Beyond that -- despite fervent hopes that they could deliver a sharp repudiation of Trump and his party at the polls -- Democrats actually lost seats in the US House, though they will maintain a majority. Despite massive fundraising, Democrats also failed to make much of a dent in the GOP-controlled Senate. The balance of power in the chamber hinges on two likely runoff elections in Georgia in January.

In his speech, Biden is expected to return to the themes that have been at the center of his campaign -- that he will restore "the soul of the nation" and dignity to the White House, while calling for the nation to put the anger and demonization of the Trump years behind them.

Biden outlined ambitious goals during his campaign -- from a major revamp of the tax code to aggressive efforts to deal with the climate crisis to an expansion of Obamacare -- as he tried to hold his fractious party together and inspire the loyalty of progressive Democrats who backed Vermont Sen. Bernie Sanders.

The pressures from the left were already apparent on Saturday. "I think he has a really, really strong mandate," Sanders told CNN's Anderson Cooper. "Now it's time for working people to be heard and for their pain to be addressed."

But the political reality of a still-polarized nation, a divided government in Washington and the difficulty of solving the nation's Covid-19 crisis are likely to temper Biden's ambitions.

In his remarks Saturday night, Biden promised to get the pandemic "under control" so Americans could reclaim their most precious moments — from visiting with their grandchildren to celebrating weddings and graduations. He noted that he would name a group of leading scientists and experts to his coronavirus task force on Monday, who would build an "action blueprint" that could be deployed as soon as he is inaugurated in January.

Biden's plan to tackle the virus, he said, would be rooted in science and constructed out of compassion, empathy and concern.

Former President Barack Obama underscored the challenges ahead for his former vice president on Saturday when he asked Americans to set aside their political differences and "give him a chance and lend him your support."

"When he walks into the White House in January, he'll face a series of extraordinary challenges no incoming President ever has -- a raging pandemic, an unequal economy and justice system, a democracy at risk, and a climate in peril," Obama said in a statement. "I know he'll do the job with the best interests of every American at heart, whether or not he had their vote."

Obama noted that the election results "at every level show that the country remains deeply and bitterly divided."

"It will be up to not just Joe and Kamala, but each of us, to do our part -- to reach out beyond our comfort zone, to listen to others, to lower the temperature and find some common ground from which to move forward."