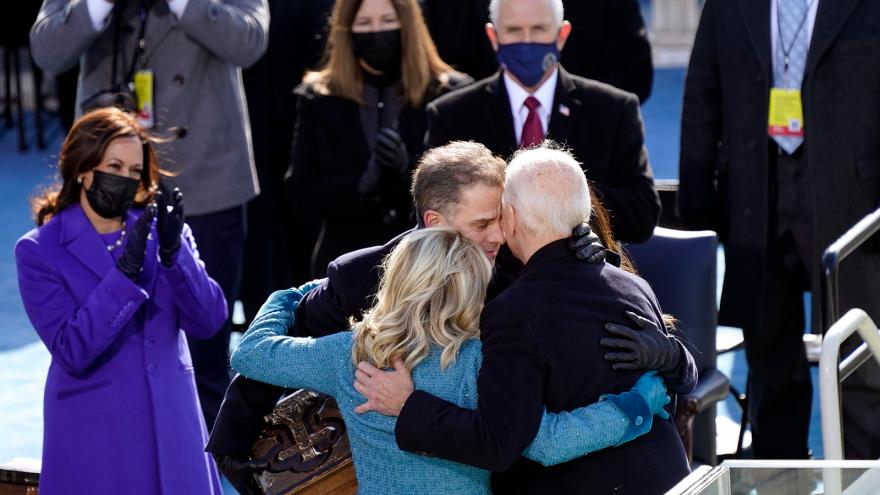 (CNN) -- Joe Biden took a brief walk along the inaugural parade route Wednesday before entering the White House for the first time as the 46th President of the United States, jogging to the sidelines to greet reporters and the few guests in attendance in a city that is locked down following the security breach at the Capitol two weeks ago.

With some 17 executive actions ready for his signature, he plans to immediately plunge into the work of extracting the nation from myriad crises, including a pandemic that shows no signs of abating, a botched vaccine rollout, an economic downturn and deep divisions inflamed by former President Donald Trump.

As one of her first acts in office, Harris -- who is now the tie-breaking vote in a Senate that is divided evenly between Democrats and Republicans -- swore in incoming three senators. She administered the oath of office to Alex Padilla, who will replace Harris as the junior senator from California. She also swore in Georgia Democrats Jon Ossoff and Raphael Warnock, who won hard-fought runoff races that flipped control of the Senate, giving Democrats control of Congress and the White House.

Trump had left Washington, hours earlier, ahead of the peaceful transfer of power that took place at noon in the heavily guarded capital city. After Biden was sworn in, heheaded to Arlington National Cemetery for a wreath-laying at the Tomb of the Unknown Soldier. He was joined by former Presidents Barack Obama, George W. Bush and Bill Clinton, along with their spouses, in a show of continuity and bipartisanship that did not include Trump.

Biden took his oath of office at the US Capitoljust two weeks after a mob of insurrectionists invaded that building seeking to overturn the presidential election based on Trump's lies about the results. The new President set out on the daunting task of uniting the nation by urging Americans to come together as they confront the deadly pandemic, an economic collapse that has left millions unemployed and deep divisions over issues of racial justice and police brutality.

"Today on this January day, my whole soul is in this — bringing American people together, uniting our nation, and I ask every American to join me in this cause," Biden said in his inaugural speech.

The former vice president, who decided to run for the White House after Trump's shocking reaction to the White supremacist rally in Charlottesville, Virginia, in 2017, noted that the nation is struggling through a rise of White nationalism, racism and deep political divisions.

"Politics doesn't have to be a raging fire destroying everything in its path," Biden said, calling on Americans to come together. "We have to be different than this. America has to be better than this."

After a tumultuous year that began a new chapter of the civil rights movement as Americans took to the streets to protest against racial injustice and police brutality after the death of George Floyd, Harris' swearing in was a remarkable achievement for a country that has often struggled to live up to its ideals of equality for all.

Biden noted the historic nature of Harris' swearing in during his speech.

"Here we stand looking out on the great Mall, where Dr. (Martin Luther) King (Jr.) spoke of his dream. Here we stand where 108 years ago, at another inaugural, thousands of protesters tried to block brave women marching for the right to vote. Today, we mark the swearing-in of the first woman in American history elected to national office, Vice President Kamala Harris," Biden said.

In soaring tones before a bipartisan audience -- that symbolized a moment of democracy restored after the turmoil of recent weeks -- Lady Gaga performed the National Anthem and Jennifer Lopez sang a medley of American musical selections including "This Land is your Land" and "America the Beautiful."

Trump, who was the first president in more than 150 years to refuse to attend his successor's swearing-in ceremony, arrived in Florida before Biden was sworn in. In Washington,more than 25,000 National Guard troops were in place to ensure that the nation's transfer of power took place peacefully.

Unlike the former president, former Vice President Mike Pence, who was in the Capitol when it was stormed by Trump's supporters earlier this month and presided over the certification of the election results, and former second lady Karen Pence attended the inauguration -- walking out onto the inaugural stands to bipartisan applause. The incoming vice president and outgoing vice president and their spouses shared a laugh shortly before the Pences departed for private life.

Speaking at the ceremony as the nation's first youth poet laureate, Amanda Gorman recited a poem about bridging divides that she finished on the night that Trump's supporters stormed the Capitol.

"Somehow we've weathered and witnessed a nation that isn't broken, but simply unfinished," Gorman said in the poem she read after Biden's speech. "We've seen a force that would shatter our nation rather than share it. Would destroy our country if it meant delaying democracy. And this effort very nearly succeeded. But while democracy can be periodically delayed, it can never be permanently defeated."

Biden reflected on that dark moment for the nation several times during his speech, noting that the world is watching after its entire system of government came under attack.

"Here is my message to those beyond our borders: America has been tested and we've come out stronger for it. We will repair our alliances and engage with the world once again. Not to meet yesterday's challenges, but today's and tomorrow's challenges," Biden said.

The new President also said the nation's success in getting through this moment will hinge on whether Americans can come together and set aside their differences to defeat the pandemic that has ravaged the nation, costing more than 400,000 lives. He highlighted some of the previous challenges the nation has confronted, including the Great Depression, two world wars and the September 11 attacks.

"I know speaking of unity can sound to some like a foolish fantasy these days; I know the forces that divide us are deep and are real, but I also know they are not new," Biden said in his speech, calling on Americans to forge a new way forward. "We can see each other not as adversaries, but as neighbors —speaking to each other with dignity and respect. We can join forces, stop the shouting and lower the temperature. Without unity there is no peace, only bitterness and fury; no progress, only exhausting outrage; no nation, only a state of chaos."

He asked his audience to unite to meet the moment as one nation: "If we do that, I guarantee you, we will not fail."

"At this time, in this place, let's start afresh," Biden said.

A day after honoring the Covid-19 victims who have died, Biden is immediately turning his focus to overhauling the Trump administration's politicized response to the pandemic into a functional operation that can accelerate the delivery of vaccines to Americans and right the flagging US economy.

He wants to show that he will move swiftly to undo Trump's legacy,with aides readying about a dozen executive actions that Biden can take as soon as he is sworn into office that include rejoining the Paris climate agreement and ending Trump's ban on travel from predominantly Muslim countries. The President plans to extend the moratorium on evictions and foreclosures for families affected by Covid-19 and to sign an order requiring masks on federal property and during interstate travel.

Biden's tone at his inaugural speech could not have been more different than the bitter, divisive one adopted by Trump throughout his presidency as he slashed his political opponents and anyone who dared to criticize him on Twitter and during his ranting campaign speeches, threaded with lies and threats to whip up his crowds.

On his way out of the Washington area, Trump -- who was not wearing a mask -- again used the racist term "China virus" to describe the coronavirus, describing it in the past tense, and touted his administration's work on developing a vaccine.

He thanked his staff and family and wished the next administration "great success" but did not mention his successor by name.

"We love you, this has been an incredible four years," Trump said in unscripted remarks at Joint Base Andrews shortly before leaving for Florida. "We've accomplished so much."

"I will always fight for you. I will be watching. I will be listening."

Biden's taskhas been complicated by the fact that Trump has still not conceded the election and impeded the transition between administrations. But Trump left the White House as a disgraced and diminished figure. CNN's White House team has reported that although dozens of current and former officials had been invited to the Wednesday morning farewell ceremony, many declined to attend. Pence said his final goodbyes to Trump on Tuesday.

Biden and Harris attended a service at the Cathedral of St. Matthew the Apostle in DC ahead of the inaugural ceremonies with Senate Majority Leader Mitch McConnell, Senate Minority Leader Chuck Schumer, House Speaker Nancy Pelosi and House Minority Leader Kevin McCarthy, in a show of unity and Biden's intent to work with leaders from both parties.

Plans for the inauguration itself were reshaped not only by the pandemic, but also by the stunning security breach at the US Capitol on January 6. There were no crowds in the streets or on the National Mall as the city remains under heavy guard.

The inaugural parade down Pennsylvania Avenue to honor the incoming administration was planned to engage the audience livestreaming at home. Both Biden and Harris had a presidential escort from 15th Street to the White House that included the US Army Band, a Joint Service Honor Guard and the commander in chief's Guard and Fife Drum Corps. The drumlines from the University of Delaware and Howard University joined that event to honor the alma maters of the new president and vice president.

Harris responded to one question from reporters as she headed to her new office accompanied by her husband and her sister Maya, as well as her nieces and grandnieces and other members of her family. Asked what her first job would be as vice president, she replied: "Walking to work."

Several Americans who sought to lift spirits of their neighbors in the midst of the pandemic are also taking part, including Dr. Jason Campbell -- a Portland, Oregon, doctor who became known as the "TikToc Doc" with his uplifting dance performances in scrubs from the hospital -- and Jason Zgonc, a 12-year-old trumpeter from Atlanta who played during hospital workers' break times throughout the summer.