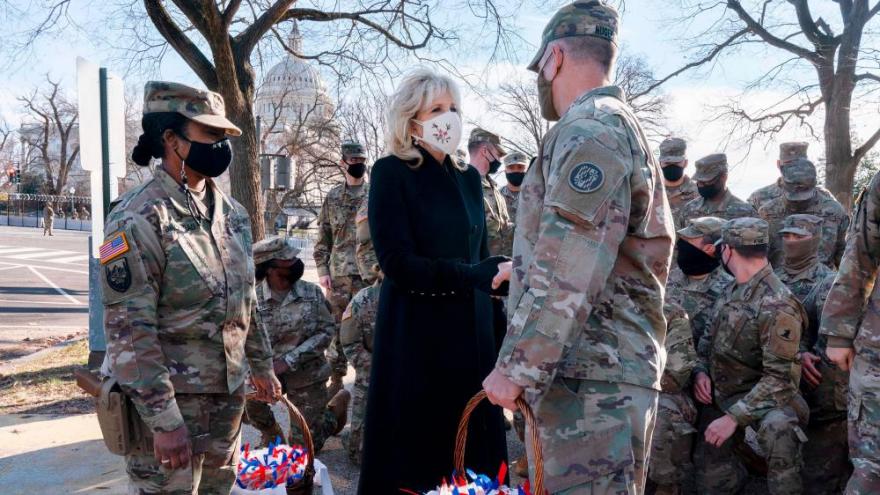 First lady Jill Biden greets members of the National Guard with chocolate chip cookies outside the Capitol on January 22, 2021, in Washington, DC.

(CNN) -- President Joe Biden and first lady Jill Biden on Monday thanked the National Guard troops who were deployed at the US Capitol for the past several months as their mission ended at the Capitol grounds on Sunday.

"Since the insurrection on January 6, thousands of proud service members, from states and territories all across our Union, have stood watch over the citadel of our democracy. As they return now to their homes and families, we salute each of them for their commitment to country," the Bidens wrote in a statement.

The Bidens added: "When duty calls, our National Guard members put their lives on hold to stand as a shield and a support when their country is in need. We've asked so much of our Guard over the past year, not only defending our Capitol, but supporting our fight against COVID-19, responding to storm damage and wildfires, and deploying internationally to support peacekeeping missions."

The Bidens noted their late son Beau was a member of the National Guard, and said, "The Biden family is a National Guard family, and we are forever grateful and in awe of those who, like our son Beau, understand that duty and service to others is what makes us who we are as Americans."

Beau Biden was a National Guard major and Delaware's attorney general. He died in 2015 at the age of 46 from brain cancer.

"To all the National Guard members and their families who sacrifice so much for our country, like all our service members: we owe you and we will always have your backs," the statement said.

Retired Lt. Gen. Russel Honoré, the man tasked with leading a review of Capitol security following the January 6 insurrection, announced on Sunday that the troops would be leaving the Capitol grounds. He told CBS the troops had accomplished their mission of securing the Capitol.

In addition to being deployed at the US Capitol following the violence on January 6, National Guard members have been responding to a wide range of domestic issues including Covid-19, civil unrest and natural disasters. Across the country, National Guard members have been working at Covid-19 testing sites, delivering protective equipment, sanitizing elderly care facilities and helping to administer vaccine shots in arms.

The US National Guard was so busy in 2020 with "unprecedented" domestic deployments that it referred to 2020 as the Year of the Guard.

CORRECTION: An earlier version of this story misstated Beau Biden's rank in the National Guard. He was a major.