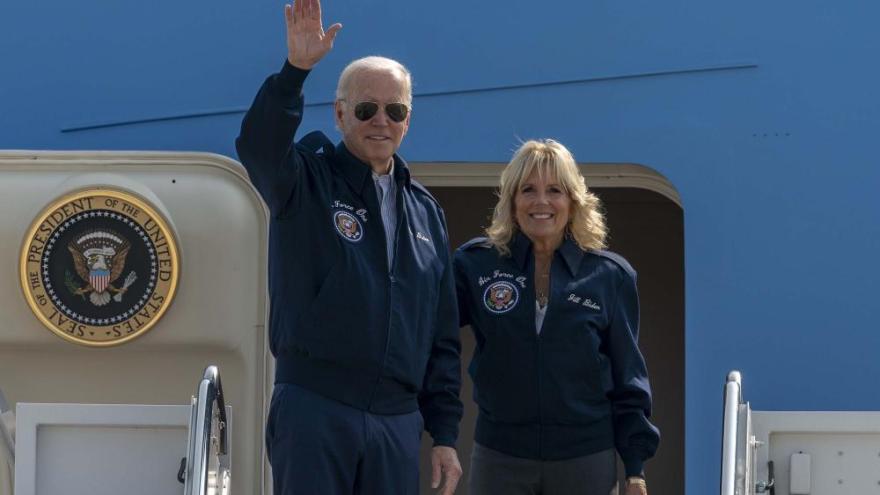 President Joe Biden, here with first lady Jill Biden, waves atop of the steps of Air Force One at Joint Base Andrews in Maryland on September 17, before their departure for London.

(CNN) -- President Joe Biden and first lady Jill Biden honored the US Air Force with their choice of attire Saturday as they departed the US to attend the funeral of the late Queen Elizabeth II of the United Kingdom.

As they arrived at Joint Base Andrews in Maryland, the Bidens wore Air Force One jackets in tribute to the military branch, which on Sunday marks the 75th anniversary of its establishment. In 1947, President Harry Truman signed legislation aboard the first dedicated presidential aircraft, officially establishing the US Air Force as a branch of the military.

On Saturday morning, the Bidens walked out of the White House residence, crossing the South Lawn together to board Marine One en route to Joint Base Andrews. The first lady wore her Air Force One jacket, while the President was wearing a suit.

When the first couple arrived at Joint Base Andrews, both were wearing matching Air Force One jackets as they crossed the tarmac with Col. Matthew Jones, Commander of the 89th Airlift Wing, and his wife, Christie.

The Bidens then boarded Air Force One, stopping at the top of the plane's steps to wave to the large crowd of attendees gathered.

To mark the Air Force's 75th anniversary, Joint Base Andrews on Sunday is hosting an airshow featuring static displays and aerial demonstrations, with more than 100,000 public attendees, the White House said.

In London on Sunday, the Bidens will pay their respects to the late Queen, whose coffin has been lying in state at Westminster Hall; sign the official condolence book; and attend a reception hosted by King Charles III. On Monday, they will attend the state funeral for the Queen at Westminster Abbey, after which they will head back to the US.

He had initially been slated to hold his first bilateral meeting with Truss in London on Sunday, but their meeting will now take place Wednesday back in the US, the White House confirmed.

The two leaders will meet in New York when both attend the United Nations General Assembly, the White House said Saturday.