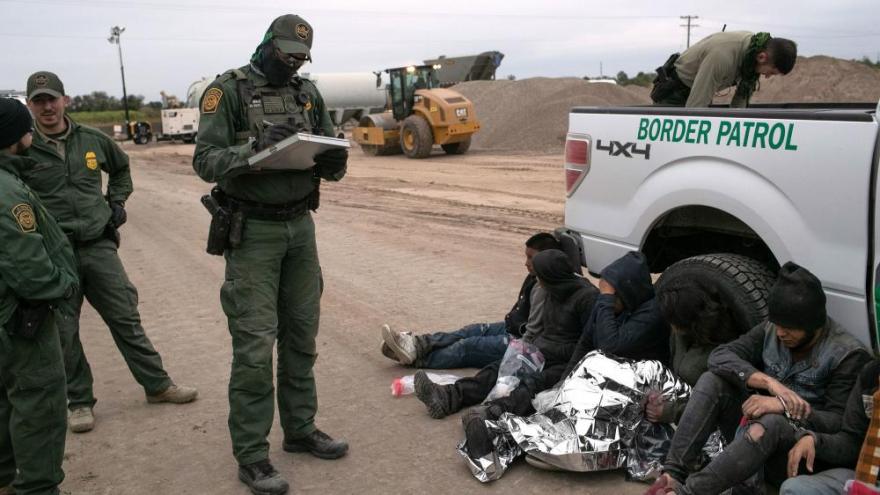 U.S. Border Patrol agents detain undocumented immigrants who they caught near the construction site of a privately-built border wall on December 11, 2019, near Mission, Texas.

(CNN) -- Arrests of migrants illegally crossing the US-Mexico border dropped in December, the seventh month of decline in a row.

In December, US Border Patrol apprehended around 32,800 people on the southwest border, according to preliminary Border Patrol data obtained by CNN, down from 33,510 in November.

In mid-December, acting Customs and Border Protection Commissioner Mark Morgan, who oversees Border Patrol, warned that border apprehensions were "still at crisis levels." He said that the average apprehensions were a little over 1,400 daily at the time. Apprehensions are used as a measure of illegal crossings and overall migration trends.

CBP does not comment on monthly numbers until they are officially released by the agency.

Apprehensions increased during the first half of the month of December, but there was a big drop after December 15, according to a Border Patrol source familiar with the numbers.

During the height of the migration crisis last May, Border Patrol on the southwest border arrested 132,856 people, primarily family members from the Northern Triangle countries of Guatemala, El Salvador and Honduras.

The number of families and children arriving and entering US custody overwhelmed resources and strained agency morale. Migrants, including children, were held longer than the allowed 72 hours, and some Border Patrol facilities faced dangerous overcrowding.

Since then, the influx of people has subsided and the agency has increased its temporary housing capacity along the border.

Morgan said last month that while the number of families arriving at the border had decreased, there was an increase in arrivals of single adult Mexican nationals, as well as migrants from outside North and Central America.

"Now we're back to prosecuting single adults who illegally enter this country," he said in December, adding that those prosecutions had gone down as the agency was overwhelmed with processing families.