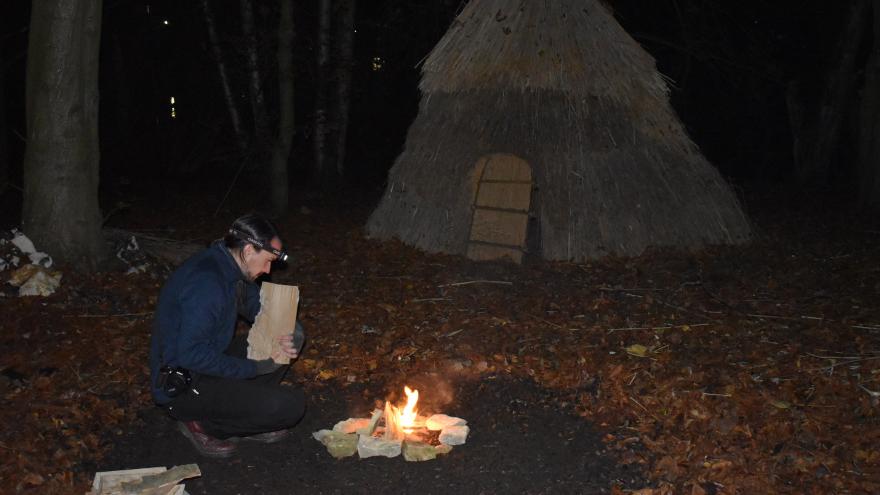 (CNN) -- Our Stone Age ancestors didn't just share stories by the side of a fire -- they may have watched them too.

Early humans living in what's now France carved art on rock tablets and placed them by the flickering light of a fire to give the illusion of movement -- an early form of animation, according to new research.

Researchers from the University of York and Durham University in the United Kingdom studied 50 stone plaquettes held in the British Museum that were engraved by hunter-gatherers about 15,000 years ago.

The plaquettes were made of limestone and excavated from a rock shelter in Montastruc, France, in the 19th and early 20th century. They feature different animals -- mostly commonly horses, reindeer, red deer and bison, but also wolves and ibex.

The researchers identified patterns of pink heat damage around the edges of some of the stones, providing evidence that they had been placed in close proximity to a fire.

To understand exactly why, the researchers conducted their own experiments in a makeshift prehistoric camp and used virtual reality software. They recreated the engraved tablets as they would have looked originally -- with clear white lines -- and placed them around a fire.

They said pattens of heat damage suggest they were placed near hearths to appear to move and flicker in the firelight. The interaction between engraved stone and the roving light of the fire made the forms appear dynamic and alive, the study said.

"We conducted this experiment at night as well. So we had the full effect -- the flickering firelight -- it was quite an exciting experience I think to see these engraved forms kind of jump to life a little bit before our eyes," said Izzy Wisher, a doctoral student at the department of archeology at Durham University and coauthor of the study that published in the scientific journal PLOS ONE on Wednesday.

"And also to then observe that the heating patterns produced by that activity matched most closely with the Montastruc examples -- that was very exciting as well."

The engraved plaques may have also had a practical purpose -- the stones may have marked the outline of the hearth. But the researchers said their study indicated they weren't solely functional, plus the same function could have been achieved by limestone that wasn't engraved.

The study said that human neurology is particularly attuned to interpreting shifting light and shadow as movement and identifying visually familiar forms in such varying light conditions.

The flames and placement of a series of plaquettes would have made the engraved animals "pop to life" as if animated, Wisher said.

"These are societies that are really focused on animals. Their whole lives are spent tracking animals, hunting animals, thinking about animals, processing animal hides for clothing. So it's probably not a stretch to say that their stories would have also involved animals," said Wisher.

"(It's) exciting to think about this art as being part of those stories that they're telling by the fireside and as they're talking about what they've been up to that day or telling stories about particular animals that those animals are also then springing to life in front of the fire."