Pregnant women should get Covid-19 vaccine, US doctors say, despite conflicting international advice 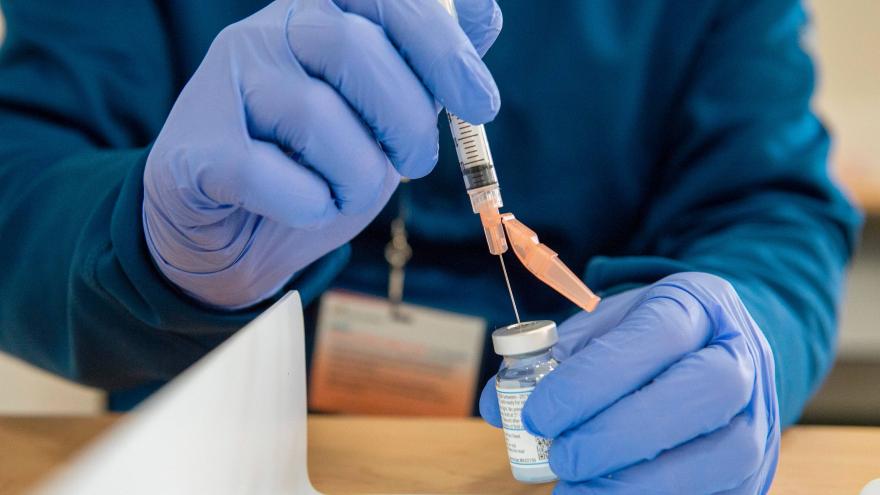 (CNN) -- If you're pregnant during the pandemic, major medical groups in the United States have a clear message for you -- please consider being vaccinated against Covid-19.

"We recommend getting the vaccine," said Dr. Richard Beigi, who sits on The American College of Obstetricians and Gynecologists' Immunization, Infectious Disease, and Public Health Preparedness Expert Work Group.

"There's really no theoretical reason to believe it's going to cause harm to either the mother, or her unborn child and we're very confident it's going to provide considerable benefits to both the mother and the baby," said Beigi, who is president of UPMC Magee-Womens Hospital in Pittsburgh.

Only a few people, such as those with severe allergies, a history of anaphylactic shock or who aresuffering from advanced cancer would likely be advised to avoid the vaccine. Any pregnant woman with concerns should speak to her OB-GYN, experts say.

"US regulatory bodies and medical experts have clearly stated that all eligible pregnant individuals should have the choice to receive the vaccine," said Dr. Christopher Zahn, ACOG's vice president of practice activities.

It's a strong, clear message, one that OB-GYNs and medical associations hope will reach pregnant women and their families who may be confused about conflicting recommendations put out this week by the World Health Organization.

On Tuesday, WHO recommended against using the Moderna vaccine during pregnancy "unless the benefit of vaccinating a pregnant woman outweighs the potential vaccine risks," such as in health workers and "pregnant women with comorbidities" who are at high risk for developing a severe case of Covid-19.

The international health agency had also recommended against using the Pfizer vaccine during pregnancy in January, pointing in both cases to a lack of safety data on pregnant women who were excluded from original vaccine trials.

But any "potential vaccine risks" mentioned by WHO are purely speculative, doctors tell CNN, compared to the known risks of Covid-19 for both pregnant women and their babies.

The risks of Covid-19 infectionfor pregnant women include serious reactions, even death, and an increased risk of preterm delivery for their babies, according to the US Centers for Disease Control and Prevention.

"The absence of data is not equivalent to risk of harm — especially when the science and basic biology does not suggest a plausible reason why harm could occur," said Dr. Kjersti Aagaard, a maternal-fetal medicine specialist at Texas Children'sHospital and Meyer professor chair in obstetrics and gynecology at Baylor College of Medicine.

Doctors who spoke to CNN said there are decades of safety data showing no harm to a pregnant woman or her baby from inactivated vaccines -- and they believe that data should also apply to the Moderna and Pfizer vaccines, which are not made from a live virus.

Instead, they are mRNA vaccines, which teach the body's cells how to make a piece of a protein that triggers an immune response. As soon as the instructions are delivered, "the cell breaks down and gets rid of the mRNA," according to the CDC.

Therefore, the WHO concerns are "focused more on the hypothetical risks at the expense of recognizing the clear benefits of immunization," Beigi said. "This can be very confusing for a woman, which is unfortunate, very unfortunate."

The Society for Maternal-Fetal Medicine joined ACOG in putting out a strongly worded rebuttal of the WHO's stance.

Covid-19 risks during pregnancy are significant

At the beginning of the pandemic, it didn't appear Covid-19 adversely affected women or their babies during pregnancy. As the data rolled in, however, that belief changed dramatically.

"And while the data is not yet complete, there's at least a small risk of maternal death and stillbirth and preterm birth with Covid-19 disease during pregnancy," Aagaard continued. "Black and Latino women have an especially increased risk of severe disease and death from Covid-19. Those are the facts."

Why would pregnancy put women at greater risk? One reason is a decreased lung capacity for the woman as the baby grows.

"You can develop respiratory compromise, to the extent that you can't recover from it," Aagaard said. "For every pandemic we've had in the last 100 years, there's been an increased risk for pregnant women when those pandemics are associated with severe respiratory disease."

In addition, Aagaard said, a pregnant woman's heart pumps 1.5 times harder than it would normally to provide adequate blood for the baby and the placenta.

"So that overaction of the heart, which we call a higher cardiac output, also renders pregnant women at risk from having heart failure problems, which can be a manifestation and potential cause of death from Covid-19 disease," she said.

Pregnant women may also be more likely to have an overenthusiastic immune system, which can lead to the so-called cytokine storm that signals more severe disease and negative outcomes, Aagaard said.

And finally, there is an increased likelihood of blood clotting during pregnancy, which Covid-19 is known to make worse.

"Humans, like all placental mammals, run the risk of bleeding to death after that placenta separates off the wall of the uterus," Aagaard said. "So 4½ million years of evolution is at our backs, helping us clot a little bit more effectively when we're pregnant."

Putting aside the obvious protective benefits of vaccination for anexpectant mom, new data has found there may also be significant advantages for her baby. Research released Friday in JAMA Pediatrics found mothers with both asymptomatic and symptomatic cases of Covid-19 passed antibodies to the virus to their newborns via the placenta.

Further studies will have to be done to assure such antibodies can protect newborns from infection and for how long, but the findings are "reassuring," said Dr. Flor Munoz, an associate professor of infectious diseases at Baylor College of Medicine, Texas Children's Hospital, in an accompanying editorial.

While that study did not examine whether antibodies created by vaccination would also cross the placenta, the concept has been used in maternal medicine for some time.

Pregnant women are given both inactivated flu vaccine and one called TDAP, which protects both mom and baby from tetanus, diphtheria and pertussis, also known as whooping cough.

"Wouldn't that be awesome if we could so beautifully transition our developing fetus to come out into the world protected from Covid-19?" Aagaard said. "If we could arm that baby with its own memory cells that would be a twofer, which is what we always are hoping for."

While both US and WHO officials are clear about the lack of safety data in their guidelines, a WHO spokesperson said the agency is placing more emphasis on "guidance that can inform immunization programme decisions" during "current limitations on global vaccine supply." The CDC and US position is focused on "individual decision-making."

"As data are lacking on the presence or absence of vaccine-associated risks in pregnancy, at this time WHO could not provide a broad recommendation for vaccination of pregnant women, except among those who fall into the highest priority groups for whom vaccination is now recommended in countries," the spokesperson told CNN via email.

"I think the fact that they're saying we don't recommend it will have an effect across many countries," said ACOG's Beigi, "in that the medical leaders of those countries are going to be much more reluctant."

"We are concerned that the conflicting recommendations will undermine the confidence of all patients considering this potentially life-saving vaccine," Zahn said. "We strongly encourage vaccination programs to follow the guidance of US health authorities and medical experts so that pregnant individuals do not face barriers to vaccination."

Trials of various sizes are currently underway, and doctors point to the scores of pregnant women who have gotten Covid-19 vaccines since they began rolling out -- with no known side effects. That makes good sense, said Texas Children's Aagaard.

"Not only have I been in obstetrics for a couple of decades, but my PhD is in immunology," Aagaard said. "And I really can't come up with what the biology or science would be as to why a pregnant woman or her fetus would be at any greater risk than a non-pregnant woman."

While appreciating the "nuance" the WHO is using to prioritize, Aagaard said she remains confident in "our capacity to walk and chew gum at the same time."

"We are fully capable of vaccinating all those in need, inclusive of all of those at highest risk of harm. This includes pregnant women, which represents approximately 3% to 5% of the world's female population at any given time," Aagaard said.