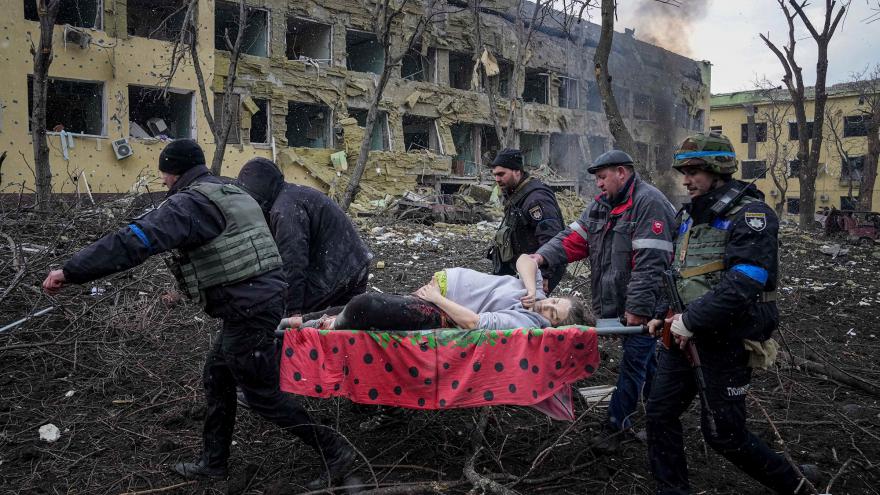 (CNN) -- A pregnant woman who was injured when a maternity hospital in the Ukrainian city of Mariupol was bombed on Wednesday has died, along with her newborn baby, a surgeon who was treating her confirmed on Monday.

The surgeon, Timur Marin, told Ukrainian television from Mariupol: "While she was being resuscitated and the anti-shock measures were being taken, we performed a caesarean section and took a child with no signs of life. The child's resuscitation for more than half an hour did not work. Resuscitation of the mother for half an hour or more -- without any results. They both died."

An Associated Press image of emergency workers carrying the injured woman on a stretcher outside the bombed hospital was shown around the world last week, including by CNN.

According to the AP, medics did not have time to get the woman's name before her husband and father came to retrieve her body, so she did not end up in one of Mariupol's mass graves.

As CNN earlier reported, at least three people -- including a child -- died in the attack Wednesday, which came despite Russia agreeing to a 12-hour pause in hostilities to allow refugees to evacuate.

The attack on the key southeastern Ukrainian city came after it had been besieged by Russian forces for days, with trapped residents forced to shelter underground, melt snow for water and scavenge for food.

"Our military is succeeding there -- yesterday they defeated another attempt at an armored breakthrough in Mariupol, took prisoners of war," Arestovych said Monday. "But for this the Russians are wiping the city out."

Mariupol's city administration confirmed Sunday that a large convoy of humanitarian aid destined for the besieged city had not arrived, and was still stuck in Berdyansk, some 50 miles to the west.

After Wednesday's attack on the hospital, the Mariupol city council accused Russian forces of dropping several bombs on it from the air, calling the destruction "enormous."

Russian Foreign Minister Sergey Lavrov on Thursday alleged without evidence that the bombed hospital was being used by Ukrainian troops and that all patients and nurses had left. Later Thursday, a Russian Ministry of Defense spokesperson denied in a briefing that Russia had shelled the maternity hospital at all, calling it a "provocation."