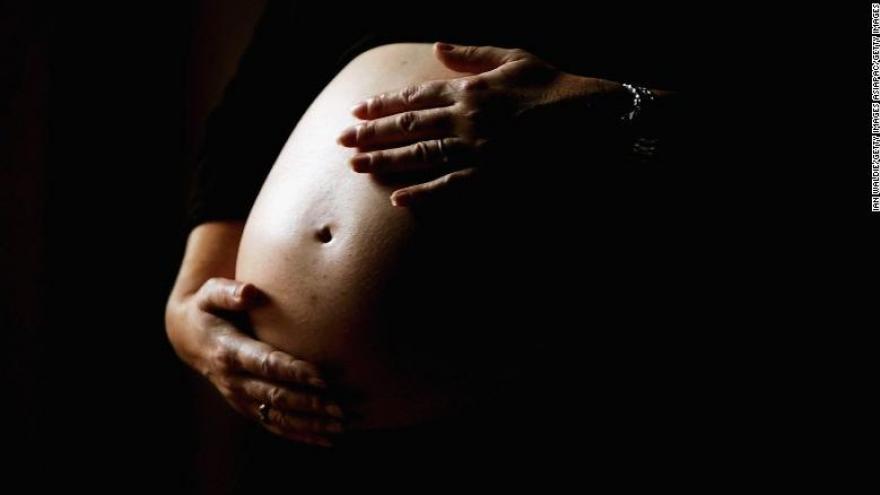 Editor's note: This story is part of As Equals, CNN's ongoing series on gender inequality. For information about how the series is funded and more, check out our FAQs.

(CNN) -- Pranaiya Oulapathorn used to say her superpower was sleeping.

"She would lie down and get ready for bed, and she'd be asleep within a minute," her husband, Hamish Magoffin, said.

Sleep took a big hit when baby Arthur was born in March 2021, though the Thailand-based family soon settled into a routine. According to Magoffin, apart from the usual stresses of having a newborn, all seemed well.

A few months in, however, Pranaiya began to struggle. Breastfeeding was a challenge, and the new mom felt she wasn't able to give her son as much milk as he needed.

Her milk ducts kept clogging up and life turned into an endless circle of breastfeeding and pumping to secure enough milk. "She became fixated on this and started putting the pressure on herself to try and get as much breast milk as possible," Magoffin said.

After weeks of this, the pair decided to switch to formula, assuming this would reduce anxiety levels and improve Pranaiya's sleep. But it didn't work.

"It was just terrible. Her sleep just unraveled," said Magoffin, explaining that instead of getting rest his wife of four years developed insomnia.

Pranaiya became consumed with worry and found it increasingly hard to do anything.

Once an active mother, the 37-year-old struggled to get out of bed and was regularly battling dark thoughts, which eventually took over.

On September 1, less than six months after giving birth, and a month after being diagnosed with postpartum depression, Pranaiya took her life, and the life of her son Arthur.

Pranaiya was known to have a great rapport with kids, being referred to as "the really nice auntie" by friends' kids.

Having her own children had not been a priority for Pranaiya, but once she and Magoffin decided to start a family, she had looked forward to becoming a mother.

Getting pregnant hadn't been easy, but happy news of a pregnancy came in summer 2020 and their son Arthur was born in Bangkok the following year.

In those first few weeks, Pranaiya was a happy mom, according to her older sister Pongnadda 'Pong' Oulapathorn.

She didn't seem to suffer from the "baby blues," mood swings caused by sudden hormonal changes experienced by many new moms in the first weeks after birth.

The new family settled into a routine with ease, even as the world around them started to close because of the Covid-19 pandemic.

Feeling out of her depth

Pranaiya was ambitious and driven, says Pong. She got an MBA from Oxford University, where she met her husband. They returned to Thailand where she worked for a top Thai bank before joining the family business.

"When she wanted to pursue anything, she would go for it, do everything by herself, and always achieve the results," Pong said.

But when it came to motherhood, Pranaiya felt out of her depth, Pong said. She soon realized that no matter how hard she tried, things didn't often go as planned, and this became a big source of anxiety.

"Raising a baby for the first time, not everything could be under control ... breastmilk, the baby himself. The tension accumulated day by day without her recognizing it," Pong said.

At the same time, as the coronavirus spread, Thailand went into lockdown.

"The baby was one month old, and [Pranaiya] was living in a condo with no garden and the fresh-air walks that she liked were restricted," Pong said.

The stress that began over Arthur's hunger didn't go away -- despite the switch to formula. It led to Pranaiya developing tinnitus and insomnia, for which doctors prescribed her steroids and sleeping tablets to treat each condition respectively.

But the medications had little effect.

In the months following Arthur's birth, despite experts saying he was doing fine, Pranaiya's husband says she also became overly concerned about her son's development.

She feared she "was not a good mother," her sister Pong said, and kept raising the same issues over and over again, becoming fixated on anything she thought was a problem.

By mid-July, Pranaiya recognized that things weren't quite right and, according to Magoffin, agreed to meet a family friend who had suffered, and recovered, from post-partum depression.

But later that month, with Arthur just 4 months old, things took a dark turn. Pranaiya started to talk about wanting to disappear, wanting things to go back to the way they were before Arthur was born, saying she didn't want Arthur around anymore.

"It was how she said it," Magoffin said. He started worrying about the safety of his wife and son.

It was around this time that she agreed to see a professional.

The first doctor the couple saw didn't quite help Pranaiya as the family had hoped.

She was asked to take the Edinburgh Postnatal Depression Scale (EPDS), a standard questionnaire that's used by physicians to identify symptoms of depression.

"We asked: 'do you want to hear what we have to say?' and he said 'no, just do the test. Anything you say is just going to be subjective, and I can't really provide an opinion on that'," Magoffin said.

Using the EPDS, Pranaiya was diagnosed as having high anxiety and mild depression and so the doctor prescribed antidepressants. But according to Magoffin, the medication appeared to have little effect. Pranaiya's depression instead became more severe and there were days when she couldn't get out of her bed.

Not happy with his approach, the family tried to find another doctor.

Paralyzed with anxiety and depression

Often unable to get out of bed, Pranaiya's relatives began taking care of her while her husband looked after baby Arthur.

In August, a new doctor determined that Pranaiya's health had deteriorated to the point where she required specialist care, recommending treatment at a private mental health hospital in Bangkok.

"At the beginning, the symptoms were quite severe and the risk of suicide was at a high level," the psychiatrist who treated her there, the third doctor she saw, told CNN.

The doctor, who wished not to be named due to his hospital protocols and the sensitivity of the issue, said they diagnosed Pranaiya with postpartum depression and that her symptoms -- including suicidal thoughts, trouble sleeping and a lack of energy or interest in activities -- were in line with those of a severe depressive disorder. For this, they prescribed an antidepressant in high dose, along with art therapy and three sessions of transcranial magnetic stimulation, a non-invasive therapy that uses electrical impulses to stimulate the parts of brain known to be affected in depression.

After two weeks, Pranaiya appeared to be responding well to the treatment. She had fewer episodes of severe depression though she still felt depressed and anxious, the doctor explained.

Looking back, the psychiatrist believes Pranaiya might have benefited from being hospitalized. It was something the family had considered, but Covid restrictions meant visits were not allowed.

Pranaiya's dark thoughts persisted, despite the doctors trying a range of antidepressants and other therapies. The changes in medication and the fact that they didn't seem to work was another source of anxiety for Pranaiya, Magoffin said.

"The person that you know starts to disappear, and the conversations that you have are just shocking," said Magoffin.

"She was saying that she wanted to disappear, that she can't do this anymore and that she failed as a mum because she was having these thoughts."

In late August, Pong took Pranaiya to Huahin, a beach town south of Bangkok in the hope that a change of scenery would help. Arthur was now almost six months old.

"She was so relieved [that] she could get fresh air without wearing any masks," Pong said. "We took deep breaths, stretched, chatted, threw a ball at the beach ... she laughed which surprised her."

When Magoffin and Arthur joined them a few days later, Pranaiya appeared to be enjoying herself.

"That was a very happy day. The beach, taking Arthur, playing in the sand and spending some time in the pool and doing all that kind of stuff that we were really looking forward to," Magoffin remembered.

"That was the last time I saw her," Pong said.

Though returning to Bangkok did bring back some of her anxiety, Magoffin said overall, his wife's good mood seemed to persist. The couple had organized a dinner to mark their 10th anniversary, and Magoffin said he'd been looking forward to the evening ahead.

The next morning, while he was in the shower, getting ready, Pranaiya killed herself and Arthur.

Pranaiya's grieving family are now focusing on her legacy. After their harrowing experience with postpartum depression, Magoffin has made it his goal to raise awareness and work on programs that provide better education, care and research into the condition.

As the doctor who was treating Pranaiya said, it couldn't be more needed. "PPD is as common in Thailand as in other countries, and is most often mild to moderate, but many patients are not diagnosed and treated because there isn't sufficient awareness and there is stigma," they said. "We don't have a good system to educate, screen for and treat PDD."

Magoffin set up a foundation in the name of his wife and son, which launched earlier this year.

To mark the occasion and raise both money and awareness, he embarked on a 1,369-kilometer (850-mile) run, walk and cycle across Britain. It took him 17 days, and he raised more than $63,000 in donations, mostly from Thailand and the UK.

But the challenge is also intended to help with grieving and healing.

"After we lost them, the only thing I could manage was going out for a walk. Just one foot ahead of the other. I didn't even feel like running or doing anything, just slow walk," he said.

As he reached Land's End, the westernmost point of mainland England, he said he sat on the rocks and watched the sea remembering his wife and son and the happy times they had together.

In farewell notes she left for Magoffin and her family, Pranaiya stressed they had done all they could to have helped her.

"You're my happiness," she wrote to Magoffin.

At her funeral, Magoffin responded: "Munchkie, I want you to know how much I love you. You're my happiness too"

If you or someone you know might be at risk of PPD, here are ways to help.

Here is what to do when you or someone you know might be at risk of suicide.