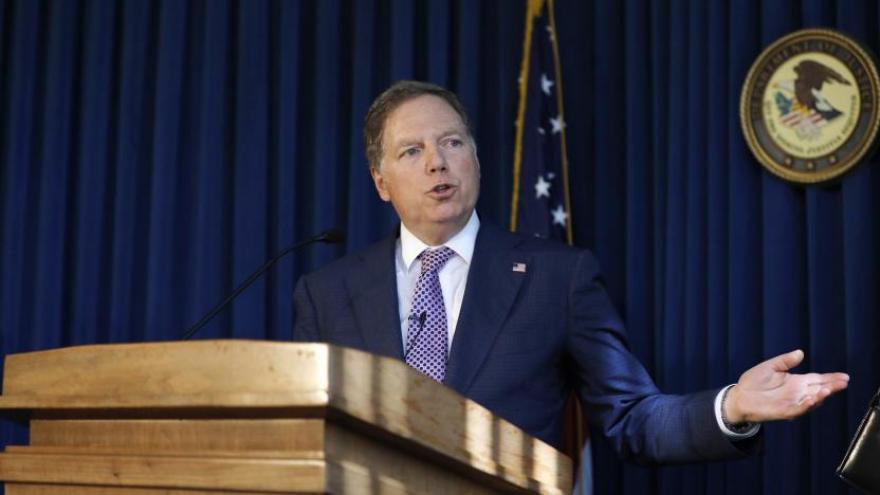 Geoffrey Berman, U.S. attorney for the Southern District of New York, is resigning, according to the Justice Department.

(CNN) -- In a fast-escalating crisis Friday night, Attorney General William Barr tried to oust Geoffrey Berman, the powerful US attorney for the Southern District of New York who has investigated a number of associates of President Donald Trump, but Berman defied him by refusing to step down.

In an extraordinary statement sent roughly an hour after Barr said Berman was set to leave the office, Berman said he had learned of his purported exit from a press release.

"I have not resigned, and have no intention of resigning, my position, to which I was appointed by the Judges of the United States District Court for the Southern District of New York. I will step down when a presidentially appointed nominee is confirmed by the Senate," Berman said. "Until then, our investigations will move forward without delay or interruption."

The standoff opens up a fresh crisis at the Justice Department, places the leadership of the most prominent federal prosecutors office outside Washington in a precarious position and again raises questions about Barr's willingness to steer the department to suit Trump's political agenda.

Berman's rebuttal came about an hour after the Department of Justice announced Trump intends to nominate Jay Clayton, the chairman of the Securities and Exchange Commission, who has never been a prosecutor.

A Justice Department official told CNN that Berman was offered other positions at Justice, including the head of the civil division, where assistant Attorney General Jody Hunt abruptly announced his departure this week. Berman declined.

A second source with knowledge of the matter said Berman was asked to resign and refused. Barr asked Berman to resign in an in-person meeting in New York on Friday, the source said.

Berman, before walking into his office in downtown New York Saturday morning, told reporters, "I issued a statement last night, I have nothing to add to that this morning. I'm just here to do my job."

The timing of the move, announced after 9 p.m. ET, immediately raised questions about the circumstances regarding Berman's departure.

Any forced ouster of Berman is likely to draw scrutiny inside the US attorney's office and among career prosecutors. He has been the US attorney for Manhattan since 2018, and under his leadership, his office prosecuted Trump's former attorney Michael Cohen, is investigating top Trump confidante Rudy Giuliani and indicted the former New York mayor's associates Lev Parnas and Igor Fruman.

Tensions between the New York and Washington offices have grown with Berman and Barr butting heads over the handling of some cases, including the indictment of Turkish bank Halkbank.

Trump and Barr have long taken issue with the office's handling of various cases, but people close to the office believe its string of extremely high-profile investigations -- including those of Cohen, Giuliani and Jeffrey Epstein -- may have deterred Justice officials from pushing out Berman because his exit would have been certain to cause an uproar and charges of political interference. For the last several months, however, largely due to the coronavirus pandemic, the office has had a relatively quiet period, and some believe Barr seized that opportunity to oust Berman.

Preet Bharara, a CNN senior legal analyst who was fired by Trump as US attorney for the Southern District shortly after Trump took office in 2017, told CNN's Don Lemon that the late-night announcement was a "highly irregular thing to do ... when there are all sorts of investigations swirling around."

"The President, his associates, there may be anger about the way that some of the prior investigations were conducted, with respect to his former lawyer Michael Cohen and others," he added.

Senate Minority Leader Chuck Schumer said the "late Friday night dismissal reeks of potential corruption of the legal process. What is angering President Trump? A previous action by this U.S. Attorney or one that is ongoing?"

House Judiciary Chairman Jerry Nadler, a New York Democrat, said "America is right to expect the worst of Bill Barr, who has repeatedly interfered in criminal investigations on Trump's behalf," adding that he would invite Berman to testify.

Trump has frequently clashed with the leadership of the prosecutors' office in New York and bristled at their investigations.

In 2018, Trump lashed out after federal agents in New York raided Cohen's office, home and hotel room as part of an investigation by federal prosecutors who were examining a hush-money scheme involving Trump and adult film star Stormy Daniels, calling the searches "an attack on our country." Cohen later pleaded guilty to eight counts, including campaign-finance violations, and implicated Trump.

Trump's former national security adviser John Bolton writes in his forthcoming book that in 2018, Trump offered to help Turkish President Recep Tayyip Erdogan with a Justice Department investigation into a Turkish bank, Halkbank, with ties to Erdogan that was suspected of violating US Iran sanctions.

Trump, according to Bolton, told his Turkish counterpart that the Southern District prosecutors "were not his people, but were Obama people," and the problem would be fixed when they were replaced by Trump. At the time, Berman had already been installed in New York office. Berman and the Justice Department brought a case against Halkbank in October 2019.

Before Clayton was nominated to the SEC post by Trump, he was a corporate lawyer at Sullivan & Cromwell. If confirmed, Clayton would be the first non-prosecutor to lead SDNY.

This story has been updated to include additional reporting, background information and reaction.