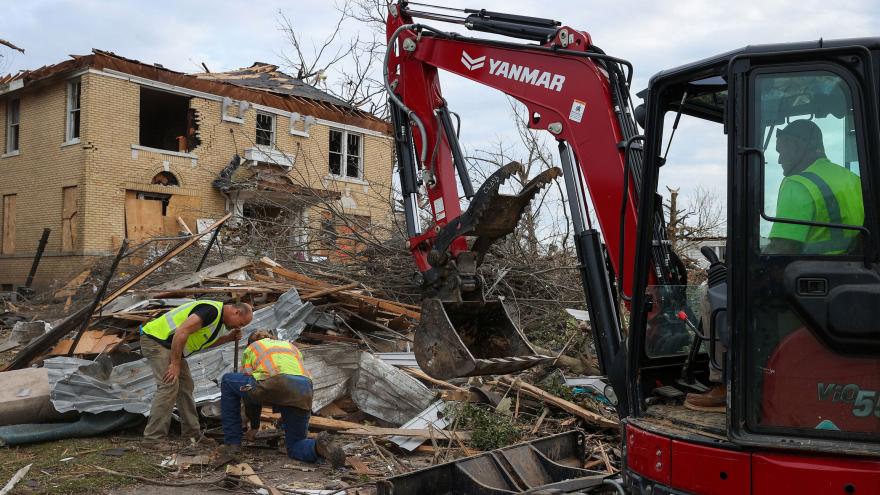 (CNN) -- As thousands of people without homes or utilities try to recover from the deadliest day of tornadoes during the month of December in US history, efforts are now turning to the arduous tasks of rebuilding shattered communities.

A candlelight vigil was held Tuesday night in Mayfield, one of the hardest-hit towns in western Kentucky, a region where at least 74 people lost their lives. Amidst prayers and hymns, pastors from area churches spoke about those who had been lost and the challenges facing those who have survived.

By Monday, electric power was restored to about 10,000 Kentucky customers, according to state emergency management director Michael Dossett, and roughly 18,500 outages are active.

These figures do not even include Mayfield, a town of 10,000 people, which he said, "doesn't exist." Power in the town will take "weeks and months" to rebuild, he said.

"Being on the ground will take your breath away," Dossett said of the catastrophic damage. "It is simply indescribable in some places."

At least 14 others were killed in Arkansas, Tennessee, Illinois and Missouri. More than 60 tornado reports were made in eight states in the Midwest and South Friday night and Saturday morning, according to the National Weather Service. Multiple reports can refer to the same tornado, and weather service crews have yet to determine how many twisters hit the region.

Kentucky Gov. Andy Beshear said more than 500 members of the National Guard were on the ground assisting with tasks, including search-and-extraction, clearing routes and traffic control.

Short and long-term FEMA recovery teams are in Kentucky, Dossett said. The agency has begun the "blue tarp process" of covering damaged homes and is also in the process of debris removal, he added.

Two teams from FEMA will work Wednesday to assess storm damage in Arkansas, Gov. Asa Hutchinson said. At least 300 structures were impacted by the storms, he said, with 61 destroyed.

President Joe Biden is expected to visit Kentucky on Wednesday to meet with victims and survey the damage, the White House said.

The President will ensure "that we're doing everything to deliver assistance as quickly as possible to impacted areas to support recovery efforts," press secretary Jen Psaki said Tuesday. "He wants those on the ground to know the federal government is there to provide whatever support is needed for them."

'I was definitely being crushed'

Mayfield is the scene of some of the most extensive damage, where more than 100 employees working at a candle factory were caught in the path of a tornado. At least eight people there died as the building was ripped apart.

Jim Douglas was in so much pain as he lay crushed beneath what he believes was 15 feet of debris that he was "praying that God would take me." Then rescue workers reached him.

In an interview from his hospital bed, where he's recovering from nerve damage and slowly gaining back the use of his arms and legs, Douglas described how an interior wall fell on top of him, hitting him in the head and throwing him to the ground.

"It was so quick. It was like different layers would come down and I could feel my body would like compact more," he said. "I was definitely being crushed."

When rescue workers arrived about an hour later, "they couldn't have done a better job of extracting me," he said.

Douglas, who has worked at the factory for two and a half years, thought about leaving as the storm approached but decided to ride it out at the factory after talking with his family.

He said once he heals, he plans to resume working.

"Eventually I'm going to be walking and I'll be working somewhere, I promise you that," Douglas said.

Additional deaths are being reported in western Kentucky following the string of storms.

The infant, her two brothers, and her parents were sheltering at her maternal grandmother's house when the tornado hit.

Koon's parents tried to protect their children by making them hide in the bathtub and covering them with couch cushions, but the tornado picked up the home and the family landed on the other side of the neighbor's house, Carman said.

"We didn't have much time with her, but we loved the time we got to spend with her," Carman told CNN.

About 70 miles east of Dawson Springs, six family members lost their lives when a tornado hit their home in Bowling Green, a relative told CNN.

Rachael Brown, 36, and Steven Brown, 35, were with their four children and Rachael's mother, Victoria Smith, 64, when a tornado hit their home.

The three adults and three of the children -- Nariah Cayshelle, 16, Nolynn, 8, and Nyles, 4 -- were killed in the tornado, Rachael Brown's aunt, Dornicho Jackson McGee, told CNN. The couple's 13-year-old daughter is still missing.

Officials are welcoming efforts to help those in need. The Western Kentucky Tornado Relief Fund has raised more than $9.89 million dollars for Kentuckians, Gov. Beshear announced Tuesday. Donations can be made on their website.