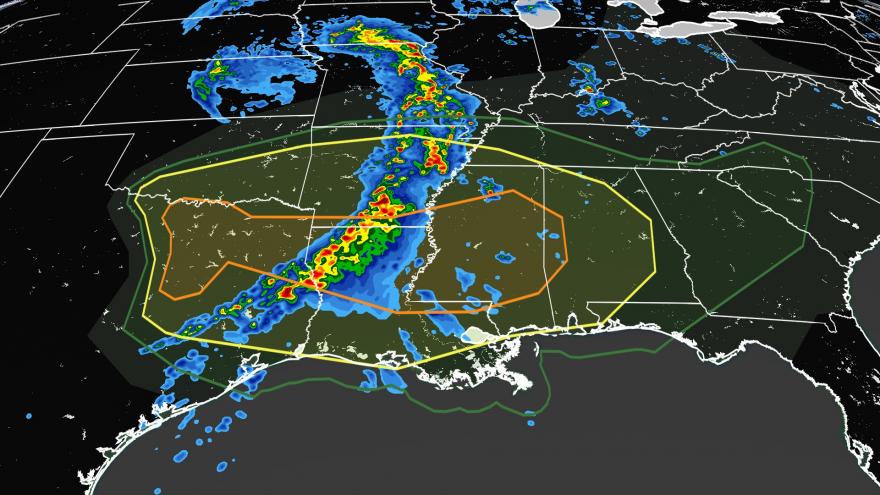 (CNN) -- Another round of severe thunderstorms is becoming increasingly likely for similar areas in the South that had strong storms and tornadoes on Wednesday.

About 45 million people could be at risk for dangerous storms from this next storm system Friday into Friday night, with nearly five million people currently in a level 3 out of 5 risk. This includes Shreveport, Louisiana; Jackson, Mississippi; and Tuscaloosa, Alabama.

"Large to giant hail is possible across parts of Texas, and a swath of damaging gusts and several tornadoes are possible from Texas east into Mississippi," said the Storm Prediction Center (SPC).

The most impactful storms will likely be Friday evening into Friday night, but storms could also form during the day. A few showers and isolated thunderstorms are currently forecast across parts of northeastern Texas, eastern Oklahoma, and much of Arkansas on Friday.

During this time, the environmental conditions are expected to be "similar to what was seen in both the Denton to Wylie (in Texas) and Dallas/Van Alstyne hail events of the past decade when it comes to hail size," said the National Weather Service office in Fort Worth. The office added in their discussion that "golfball to even baseball or softball size hail" could be possible.

The severe threat will ramp up by sunset, however, as thunderstorms potentially become more widespread.

Storms will remain ongoing across that northeastern Texas through Arkansas region, but there will also be storms forming further east from Louisiana through the mid Mississippi River Valley beginning Friday evening.

The SPC warms the threat will shift from primarily large hail during the day to tornadoes and destructive winds at night: "Severe gusts and tornadoes will likely become the main hazards as storms move east across northern Louisiana eastward into Mississippi and into western Alabama by early Saturday morning."

That means the greatest, most widespread threat for severe weather will be overnight Friday. This includes the risk for tornadoes. That makes such storms especially dangerous because many people are sleeping and may not be paying attention to any weather alerts issued.

"We are looking at a multi-state, multi-day event with significant severe storms continuing though the overnight hours in many places. Make sure you have multiple ways to get your local warnings," said CNN meteorologist Chad Myers.

The early morning hours of Saturday will likely remain active in terms of the dangerous storms, with a line of thunderstorms expected to track through the lower Mississippi River Valley by sunrise.

Unlike typical severe weather setups when the best risk for strong storms in in the afternoon and evening, the Southeast could be dealing with storms, containing primarily damaging winds, Saturday morning and into the afternoon.

The weather feature driving these storms "will likely support a continuation of (the storms) across the Gulf Coast during the morning and perhaps persisting into the afternoon," said the SPC.

Flooding will be another threat associated with these storms. The Weather Prediction Center has highlighted the region centered around the lower Mississippi River Valley in an elevated risk for flash flooding Friday into Friday night as well as southern Alabama and the western Florida Panhandle for Saturday.

A widespread 1 to 3 inches of rainfall is expected, with pockets of 3 to 8 inches likely, especially closer to the Gulf Coast.