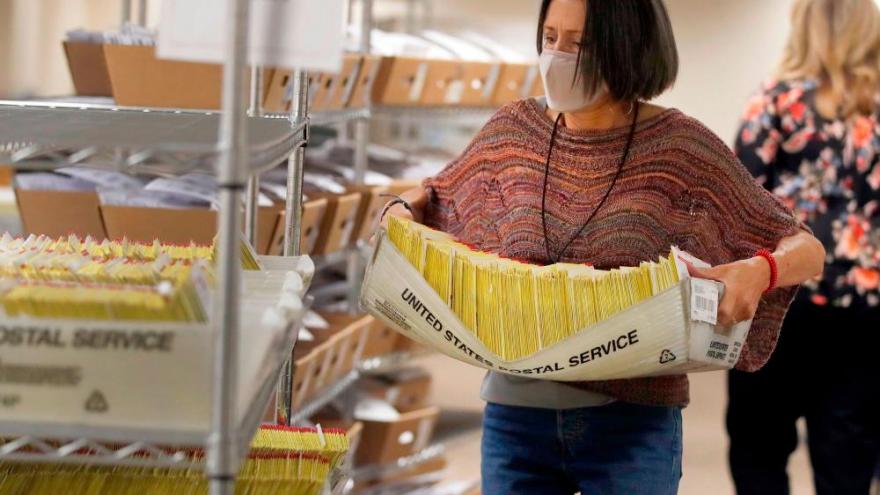 (CNN) -- The United States Postal Service will continue to implement extraordinary measures through this weekend to deliver ballots in time to be counted in more than a dozen states, a top official at the agency said Wednesday.

Kevin Bray, who is in charge of all mail processing during the 2020 election, testified in court on Wednesday that the Postal Service will continue the extra measures through Saturday in order to ensure mailed ballots can be counted.

The decision is important given the fact that more than a dozen states allow properly postmarked ballots to be counted if they arrive after Election Day. Those ballots must be postmarked on or before Election Day.

The measures could be especially important in Pennsylvania, where state law allows ballots -- postmarked before or on Election Day -- to arrive by November 6 and still be counted.

President Donald Trump's campaign is planning to go to the Supreme Court to ask the justices to intervene in a pending case challenging a Pennsylvania Supreme Court decision that allowed the late-arriving ballots to be counted. The justices had refused to expedite the appeal before the election, but they are still considering whether to take up the case.

Bray said that USPS would continue to utilize the express mail network, which guarantees delivery by one to two days, and what they call "local turnaround," which allows local ballots to be delivered the same or next day.

The announcement comes as scores of ballots continue to be counted across the country as the presidential election hangs in the balance. Though mail-in ballots received after Election Day will be a tiny percentage of the total ballots, more than a dozen states -- including Ohio, Florida and North Carolina -- allow ballots to be received if they were postmarked on or before Election Day. Those states represent 317 of the nation's 538 Electoral College votes -- or 59%.

The extra measures, however, won't impact Wisconsin, a key state CNN projected on Wednesday that former Vice President Joe Biden will win, as the Supreme Court ruled last month that mailed ballots there cannot be counted after Election Day.

The Trump campaign said Wednesday that it will "immediately" request a recount in Wisconsin, though state law says a campaign can't petition for said recount until the Wisconsin Election Commission completes the canvass from county election boards.

A federal judge had ordered the Postal Service to mandate some of the extra measures last week. The agency announced the measures to address the slow down of ballot processing in key states, a decision that was made in light of new court filings that showed that for the third day in a row, USPS moved fewer ballots on-time in critical battleground states than it did in the previous day.

The order by Judge Emmet Sullivan also mandated that in addition to the USPS' daily sweeps for election mail, USPS processing plant managers must also certify that all local ballots have been sent to the local election or post office by 10 a.m., local time, on Monday and Tuesday.

But Sullivan was so angered by the Postal Service's inability to sweep its facilities for ballots Tuesday afternoon that he said on Wednesday that he will want answers under oath from Postmaster General Louis DeJoy.

"I agree the Postmaster is either going to have to be deposed or testify before me under oath," Sullivan said. He said he was not pleased the USPS couldn't comply with the Election Day court order, and didn't notify him until the court's deadline passed that they didn't have personnel on site in facilities to look for ballots in the mid-afternoon.

Sullivan has put in place several court orders requiring the Postal Service to explain how much election mail it's failing to process daily, especially in states with low performance, which includes parts of key battleground states such as Pennsylvania.

The court's order on Tuesday for an additional sweep was in response to reports of lower performance in some areas -- where strict deadlines for absentee ballots to get to elections boards approached -- and questions about what happened to 300,000 ballots without final scans before their delivery.

"Someone may have a price to pay about that," the judge said about the USPS's failure to sweep facilities an additional time on Tuesday.

"It's your clients," Sullivan told a Justice Department attorney representing the USPS. "I am concerned about your clients, each and every one starting at the top of the food chain."

Joseph Borson, representing USPS, told the judge the reason the postal service didn't conduct the sweeps was that "it took some time for this information to get to the right people."