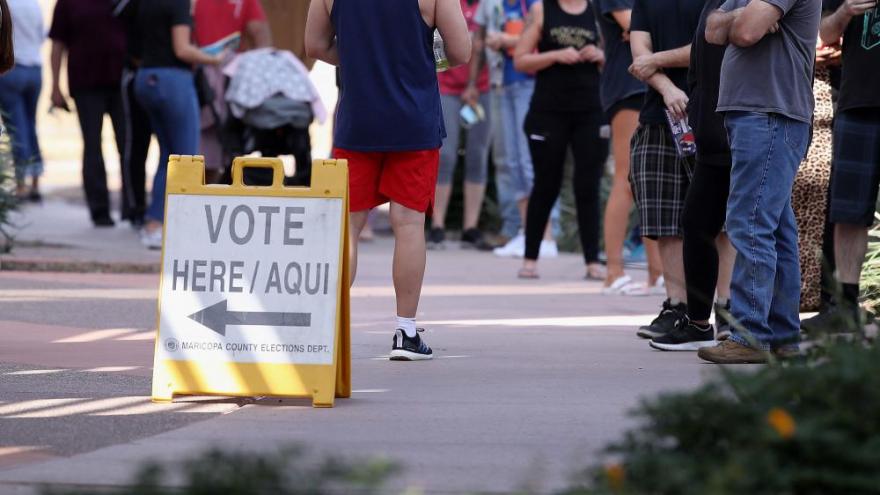 Voters wait in line at the Surprise Court House polling location on November 03, 2020 in Surprise, Arizona.

(CNN) -- More than half of all counties in Arizona have conducted post-election audits and found either no discrepancies or microscopic issues that don't affect the outcome of the race, according to reports filed with the Arizona secretary of state's office.

Audits in Arizona's four largest counties, which comprised 86% of all votes for president in the state, turned up no evidence of the systematic voter fraud about which President Donald Trump has complained. There were no irregularities found in Maricopa County, which is the most populous county in the battleground state and includes Phoenix, the reports show. Officials in Pima County, home to Tucson, audited a random sample of 4,239 votes in the presidential race and only found a two-vote discrepancy.

The audit results come as Arizona currently has a thin margin between President-elect Joe Biden and Trump. Biden is ahead by 11,390 votes, or about 0.34 percentage points, and more than 3.3 million ballots were cast statewide. As of Thursday morning, there are fewer than 25,000 ballots remaining to be counted, according to the secretary of state's office. CNN has not projected a winner.

Earlier on Thursday, Trump tweeted: 'From 200,000 votes to less than 10,000 votes. If we can audit the total votes cast, we will easily win Arizona also!" The numbers he cited were inaccurate -- Biden's lead in Arizona hasn't dipped below 10,000.

Under state law, bipartisan audit boards routinely conduct hand-count audits of early ballots and Election Day ballots in all of Arizona's 15 counties. The audits, which counties begin within 24 hours of the polls closing, must include five races, including the presidential race. By regulation, they have to count regular Election Day ballots from at least two precincts or 2% of precincts, whichever is greater. The precincts are selected at random, by drawing.

The Trump campaign has also pursued Arizona in court through one of several flimsy lawsuits it has filed in battleground states. The Trump campaign filed a lawsuit on Saturday seeking to block the canvass or certification of all ballots cast in person on Election Day in Maricopa County until they could be reviewed.

In the lawsuit, which revived disproven claims that Sharpie pens were disenfranchising voters, the campaign argued that some voters' ballots were rejected by tabulation machines due to defects, such as stray marks or ink blots from Sharpie pens. The campaign is trying to make their case using statements from two voters who suspected, but did not have evidence that, their ballot wasn't counted.

A Maricopa County elections official has told the court only 180 ballots cast on Election Day were even reviewable, and that there was no systemic problem with the election.