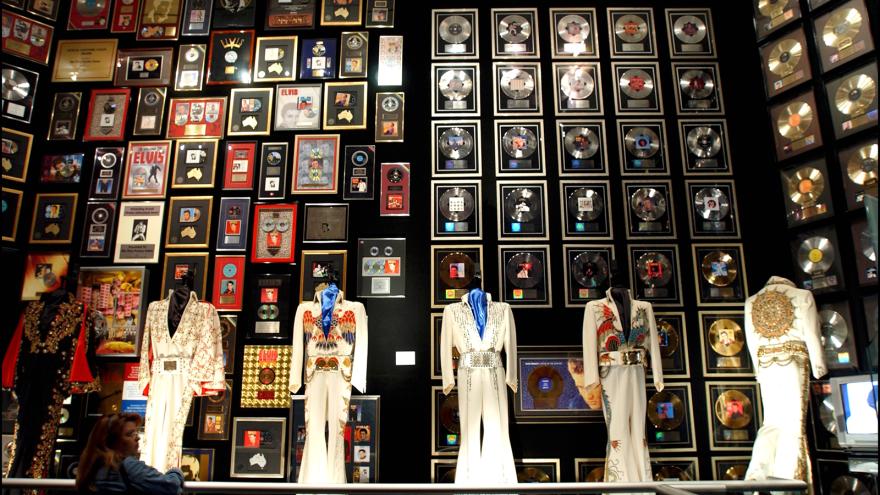 (CNN) -- "The Mississippi Delta is shining like a National guitar... And for reasons I cannot explain there's some part of me wants to see Graceland."

Paul Simon released that anthem about the historic Memphis home of Elvis Presley in 1986, about a decade after the death of the famed singer. Much has changed.

Covid-19 hurt Graceland so much that Tennessee state-issued bonds tied to tourist revenue have gone into default. The city of Memphis, the state and Elvis Presley Enterprises are squabbling over how this happened and how to fix a slide that brought some $20 million of Graceland Project bonds down to "junk" status.

Now, in the home of the King, there's a whole lot of finger-pointing going on.

"We did not default," insistsJoel Weinshanker, who has been managing partner of Elvis Presley Enterprises for a decade." The state agency defaulted," he said, referring to the economic development agency, EDGE, of Memphis and Shelby Counties.

Not so fast, countered Stefanie Barrett, the agency's director of marketing and communications, in an email."EDGE serves as a conduit ... The Graceland bonds must be repaid from [taxes] that are all generated at Graceland." Her email states: "Neither EDGE, the City, the County, the State nor any taxpayer is liable ... for the repayment."

Graceland is one of the South's biggest tourist draws and for years was the nation's second most-visited home after the White House. Then came Covid.

"Covid-19 was the largest crisis to hit the leisure and hospitality industry in history," said a spokesperson for the Tennessee Department of Tourist Development. The state of Tennessee saw just 75 million visitors in 2020, down from 128 million the year prior, according to the department.

Graceland's default may have implications for other tourist attractions and cultural sites nationwide that have pledged revenues to raise financing.

But this bond offering is "unusually complicated," which is often an indication that there may be problems later, said Matt Fabian, partner at Municipal Analysis Management.

EDGE originally issued $104.3 million in Graceland Project bonds in 2017, some of which were unrated or identified as high risk. Different revenue streams from Graceland, tied to a slew of new taxes — sales, tourist and property — were each pledged to different series of the bonds. About $20 million worth of those are now in default.

As for the bond counsel who approved the complicated bond issue, "we're out of the loop," said an email from Bass, Berry & Sims.

The bond proceeds went to fund a massive expansion, perhaps too ambitious, critics say, beginning in 2015 and, eventually adding new buildings and a 450-room hotel.

Also added were an Elvis auto museum,a collection of more than 100 of his sequined jumpsuits and other outfits, memorabilia and more on the history of music, including Black artists who influenced or worked with Elvis. The singer's ex-wife, Priscilla Presley, noted at the 2017 opening that "that's what Elvis wanted."

It worked. The hotel received a covetedMobil four-diamond award and has twice hosted the General Hospital annual fan convention. The cheapest adult ticket to the property, including a mansion tour, is $77. An Ultimate VIP pass, encompassingthe new attractions, a private tour, lunch and access to the singer's private planes, is $190.

"Years ago, a visit was a drive-through, now were getting them to stay a few days," said Weinshanker.

But as Graceland grew, the expansion pitted Elvis Presley Enterprises against the city of Memphis. In 2018, Graceland sued the mayor's office over a delay in plans to build aconcert venue that may have infringed on the city's non-compete with the FedEx Forum and the Memphis Grizzlies. (The Mayor's office did not respond to multiple emails.)

With that project blocked, Weinshanker began to speak in interviews about a possible solution that was tantamount to heresy: moving Graceland out of Memphis.

Elvis Presley Enterprises holds the rights to the singer's image and much of his music and is still owned in part by his daughter, Lisa Marie Presley. (Weinshanker declined to give the percentage, but it has been reported in court documents as 15%). Emails to her representatives were not returned.

During the height of Covid, the property was closed, or operating under reduced capacity, and revenues fell sharply.

But those financial challenges might prove temporary. Attendance has been boosted in recent weeks by the "Elvis" film by director Baz Luhrmann. It crossed the $100 million mark at US box offices on July 15, "becoming one of the rare films without superheroes or dinosaurs to reach that mark," Variety reported.

Also helping is that tourism climbs in August, as the city celebrates Elvis week (the singer died August 16, 1977, at age 42).

There's a weeklong series of events, concerts, and a huge candlelight vigil that closes down the streets surrounding Graceland. Thousands of fans flock there annually, in what some visitors dub a "pilgrimage."

Meanwhile, what happens to investors in the defaulted bonds? They'll just have tobe patient. "The bondholders must wait for sufficient tax revenues to be generated from Graceland," EDGE said.