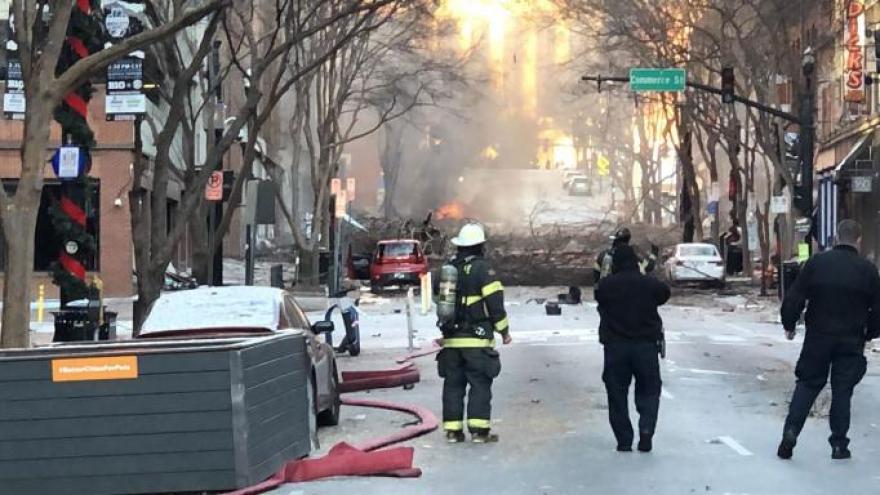 Police and fire respond to an explosion Christmas morning in Nashville.

(CNN) -- First there were the gunshots that startled residents awake in a downtown Nashville community on Christmas morning.

When people looked out their windows a little before dawn, they saw an old, white motor home parked on their street.

Then the sound of a woman's voice started emanating from the recreational vehicle, with a warning. There was a bomb that was going to go off in 15 minutes.

When the RV exploded, it shattered windows and sent flaming pieces of debris through the air, damaging several buildings.

The explosion remains a mystery, but Mayor John Cooper on Friday said the blast was caused by a "deliberate bomb."

Three civilians were hospitalized and are in stable condition, officials said.

The unusual warning that came from the RV likely saved lives. But serious injuries were also avoided due to the police officers who took the warning seriously and cleared the area.

Metro Nashville Police Department Chief John Drake on Friday evening said investigators found tissue near the blast site. They will be examined, he said, to determine whether they are human remains. He could not say how close the tissue was to the site where the motor home exploded.

The blast tore into at least 41 businesses, and one building partially collapsed, officials said. Concerned about the structural integrity of the affected buildings, the city cordoned the area off and won't allow anyone in until Sunday afternoon.

"It will be some time before 2nd Ave is back to normal," Cooper said.

Witnesses recalled the terrifying moments before the explosion and in its aftermath. "I've never seen anything like it," resident Betsy Williams told CNN. "It shook everything."

She said she heard the warning from what sounded like an automated female voice. She said if the gunshots hadn't woken her up, she's not sure she would have heard the message.

She and her family left after the voice from the RV said there was eight minutes left before the explosion. They headed across the river and watched from the parking lot of the city's NFL stadium.

When time expired, they started to head back. As they were driving down 2nd Avenue, they saw the explosion, Williams said.

"The fireball went all the way up past the AT&T, above the AT&T building. Everything just, I mean, everything shook. It was quite the blast," she told Anderson Cooper.

Another resident said the scene of destruction was like an apocalyptic movie.

Three cars were set afire. Trees were down. Bricks and glass were everywhere.

The mayor thanked the police for saving people from harm.

Metro Nashville Police Department officers were responding to a call of shots fired around 5:30 a.m. CT Friday when they found the motor home parked in front of an AT&T transmission building at 166 2nd Avenue North.

When they heard the warning they moved people away.

The RV exploded at 6:30 a.m. CT, said police spokesman Don Aaron. "We do believe this to have been an intentional act."

The force of the explosion knocked down one officer, Aaron said, and caused hearing loss in another. But no officers suffered serious injuries.

AT&T spokesman Jim Greer told CNN that the company's network hub in the city was damaged in the explosion and service in the Nashville area was affected. AT&T is the parent company of CNN.

The street is on the edge of Nashville's hospitality and tourist district in a historic part of town.

Officials have no information about whether anyone was inside the RV when it exploded. Police tweeted a photo of the RV as it was driven into the area at 1:22 a.m.

There were no known credible threats in the Nashville area that would have signaled an impending attack on or before Christmas, a federal law enforcement source told CNN.

A second law enforcement source said federal authorities are not aware of any increased chatter nationally by known extremist groups that would indicate any credible plans for conducting attacks around the holidays.

Acting US Attorney General Jeff Rosen was briefed on the incident, according to his spokesman, "and directed that all DOJ resources be made available to assist in the investigation."

Technical experts from the FBI lab and evidence response teams have been brought in from around the country to "help process this massive crime scene," said FBI agent Matt Foster.

ATF Special Agent in Charge Mickey French said his agency had activated its national response teams and was working alongside the FBI and MNPD. The agency has explosive specialists, chemists and engineers involved in the evidence recovery process.

The White House said that President Donald Trump has been briefed and would receive "regular updates." President-elect Joe Biden has also been briefed.

Tennessee Gov. Bill Lee said in a statement on Twitter that the state would "supply all the resources needed" to determine the cause of the explosion.