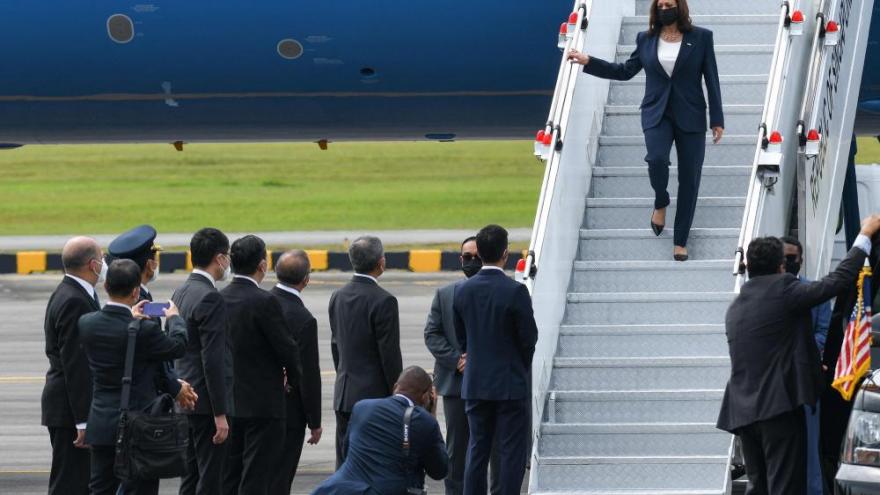 Vice President Kamala Harris' departure for Vietnam was delayed Tuesday afternoon after her office was informed of a "report of a recent possible anomalous health incident" in Hanoi. Harris here arrives in Singapore on August 22.

(CNN) -- Vice President Kamala Harris' departure for Vietnam was delayed by several hours Tuesday afternoon after her office was informed by the US embassy in Hanoi, Vietnam, of a "report of a recent possible anomalous health incident."

That term is the way that the government usually refers to the mysterious Havana syndrome that has sickened hundreds of US officials over the past few years.

Aboard Air Force Two, Harris' chief spokeswoman Symone Sanders told traveling reporters that Harris is "well, all is fine and looking forward to meetings in Hanoi tomorrow." Later she said of the delay: "This has nothing to do with the vice president's health," according to a pool report.

Harris eventually took off from Singapore's Paya Lebar Air Base at 7:32 p.m. local time, after a more than three-hour delay.

During the White House press briefing Tuesday afternoon, White House press secretary Jen Psaki attempted to assure reporters of the vice president's safety in Vietnam, saying Harris "wouldn't travel further to a country if there wasn't confidence in her security on the ground."

When asked if Harris or her staff were the target of a possible attack, Psaki said no additional assessments have been made. She also declined to elaborate on any additional security details, such as how the administration will keep the vice president safe.

"This is not a confirmed case at this point in time. We take any reported incident, which was recent and was reported publicly, I will note, quite seriously. As a result, there was an assessment done of the safety of the vice president, and there was a decision made that she could continue travel along with her staff," Psaki said.

Psaki confirmed that those affected were not traveling with Harris but declined to say how many individuals fell ill. Harris was not medically evaluated because she was not on the ground at the time the incident was reported.

The intelligence community still doesn't have an official explanation for Havana syndrome, which is a perplexing mix of sensory experiences and physical symptoms that have now sickened hundreds of US diplomats, spies and troops around the globe -- some severely enough to force their retirement.

CNN has not reported any cases of Havana syndrome in Vietnam.

Incidents of Havana syndrome began in late 2016 in Cuba and a Senate committee said earlier this year that the number of suspected cases appeared to be on the rise.

Victims of Havana syndrome have reported a varying set of symptoms and physical sensations, including sudden vertigo, nausea, headaches and head pressure, sometimes accompanied by a "piercing directional noise." Some have been diagnosed with traumatic brain injuries and continue to suffer from debilitating headaches and other health issues years later.

US federal investigators have struggled to determine what or who is causing the mysterious symptoms. There have been cases reported in Russia, China and other countries across the globe. Last month, Austrian authorities said they were investigating reports that US diplomats in Vienna had experienced symptoms of Havana syndrome.

Two defense officials said in May that the Pentagon was drafting a memo to the entire US military and civilian workforce asking personnel to report any so-called anomalous health symptoms that might indicate they have been victims of Havana syndrome.

CNN reported earlier this month that frustration is rising among rank-and-file staffers in the State Department and diplomats over what multiple officials say has been a tepid response by department leadership, including Secretary of State Antony Blinken.

The reported incident comes in the middle of Harris' trip to Singapore and Vietnam, as the vice president looks to convey to the Southeast Asian nations that the US is sincere in its long-term commitment to the region.

White House officials say Harris' overarching mission of the trip is to shore up relationships with regional partners. She is expected to focus on regional security issues amid concerns over China's territorial claims in the South China Sea; economic priorities, including supply chain issues like global chip production; climate change; and the Covid-19 pandemic.

It's her second trip abroad as vice president. Earlier this year, she traveled to Central America -- a trip that also saw travel issues as Harris had to switch planes moments before leaving for Guatemala due to a technical glitch.