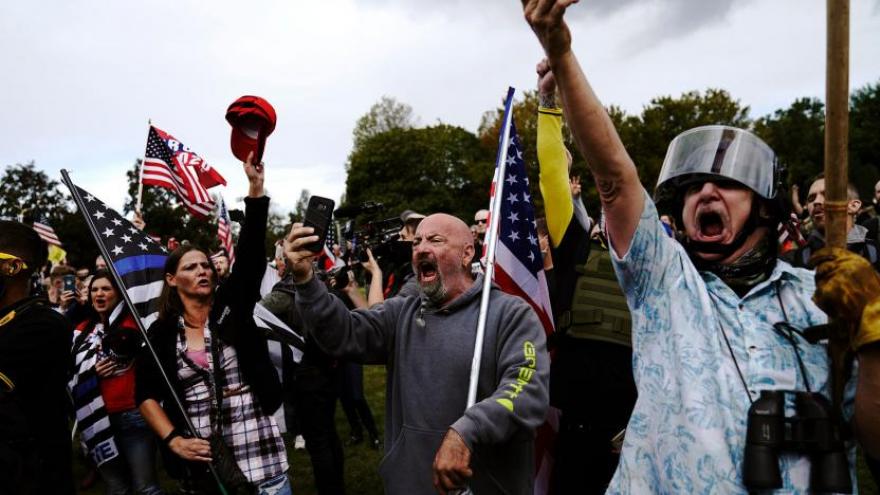 Proud Boys and their supporters stage a rally in Portland on Saturday.

Portland has been the site of regular protests against police brutality and racial injustice since Minneapolis police killed George Floyd in May. The demonstrations found renewed intensity after Kenosha, Wisconsin, police shot Jacob Blake last month and again after last week's announcement that only one of six Louisville, Kentucky, policemen would be charged in connection to Breonna Taylor's fatal shooting, but not for the killing itself.

Around 8:30 p.m. (11:30 p.m. ET) Saturday, several hundred demonstrators converged on Lownsdale and Chapman squares, across the street from the Multnomah County Justice Center building that houses the Portland Police Bureau, and began blocking a nearby intersection, police say.

Via loudspeaker, authorities ordered them to leave the roadway, but "much of the group remained in the street," according to the unified command composed of the Oregon State Police and Multnomah County Sheriff's Office. On Twitter, the sheriff's office warned that deputies could use tear gas and batons on anyone refusing to clear the street.

While the sheriff's office later tweeted it deployed no tear gas at any of Saturday's protests, crews from CNN affiliate KATU witnessed police fire pepper balls at protesters, while someone threw a flare-like device back at officers, the station reported.

"I would also like to thank Oregonians for not rising to the bait when the Proud Boys came from out of town to express their hateful views yesterday," she said, referencing a right-wing group that organized one of the rallies. "When we all work together as a community to keep the peace, we can keep Oregonians safe while still allowing free expression."

"Officers attempted to disengage and leave the area multiple times in an effort to de-escalate, but each time as they retreated, individuals in the crowd threw projectiles at officers and re-entered the street. Officers made additional arrests," the unified command statement said.

As officers attempted to put one arrestee into a transport van, the statement said, a man inside the van forced his way out and and fled, running about two blocks with zip-ties binding his hands before officers recaptured him.

After a traffic stop about three blocks from the justice center, during which a drone was seized, officers were targeted with more projectiles -- believed to be ball bearings fired from slingshots. police said.

Authorities declared the assembly unlawful about 11:45 p.m., but most of the people in the area refused to disperse, police said, so officers began physically moving the crowd, some of whom responded by pelting officers with "additional rocks and other dangerous objects" as they made arrests.

Police seized a can of bear spray and a tactical baton during one arrest, the unified command statement said.

By 1:30 a.m. Sunday, most of the crowd had left, save for a "small group of hostile individuals" in Chapman Square who threw bottles at officers, prompting more arrests, police said.

A list of those arrested and the charges leveled against them will be released later, the unified command said.

The violence came after a day of demonstrations unfolded at three north Portland parks. Hundreds of Black Lives Matter supporters gathered at Historic Vanport, while more than 1,000 people attended a function in nearby Delta Park that was billed as a free speech rally to support police and President Donald Trump. It was organized by the far-right Proud Boys, which the Southern Poverty Law Center labels a hate group. The founder of the Proud Boys is suing the SPLC for designating the organization a hate group.

The Proud Boys and antifa rallies were finished by mid-afternoon, police said. Though the daytime demonstrations finished largely without incident, police made a handful of arrests and confiscated a variety of weaponry.

Shields were handed out at the Proud Boys rally, where some attendees wore body armor and carried firearms. Police made six arrests in and around Delta Park and confiscated firearms, paintball guns, baseball bats and shields, according to the unified command.

TJ Detweiler, who works in construction and plumbing, told KATU that he wanted to end domestic terrorism in the country.

"I would like to see people stop the looting and rioting and enjoy the country for what rights we have," Detweiler told the station, explaining his presence at the rally.

Several people pointed out supposed antifa supporters in the crowd and chased them away, and Portand police said they were investigating an incident shared on social media in which someone is seen pushing a man with a camera to the ground and kicking him in the face.

Near Peninsula Park, Portland police seized buckets of rocks and condoms filled with an unknown substance, they said. About three blocks away from the park, a state trooper suffered minor injuries when someone threw a rock at the driver-side window of his squad car, Oregon State Police said.

Several protesters told KATU that their aim was to keep the peace.

"Our emphasis is on nonviolence, though. Eventually we'll all come together and be able to forward the message of how Black lives matter," Jamal Williams of Portland United for Justice and Equality told the station.

Following allegations that officials weren't doing enough to protect Portland amid the protests, Gov. Brown allowed county and state law enforcement to take over security Friday. She also declared a state of emergency, boosting the number of police and permitting the use of tear gas.

About 50 Portland Police Bureau officers were deputized as federal marshals ahead of Saturday's rallies, enabling prosecutors to file federal charges against anyone who assaults an officer.

"Portland Officers have been serving on the front lines of nightly protests for months, sustaining injuries and encountering unspeakable violence," State Police Superintendent Travis Hampton said. "If I am to send them into harm's way this weekend, on my authority, I'm going to ensure they have all the protections and authority of an OSP Trooper."

This story has been updated to note that the Proud Boys founder is suing the Southern Poverty Law Center.