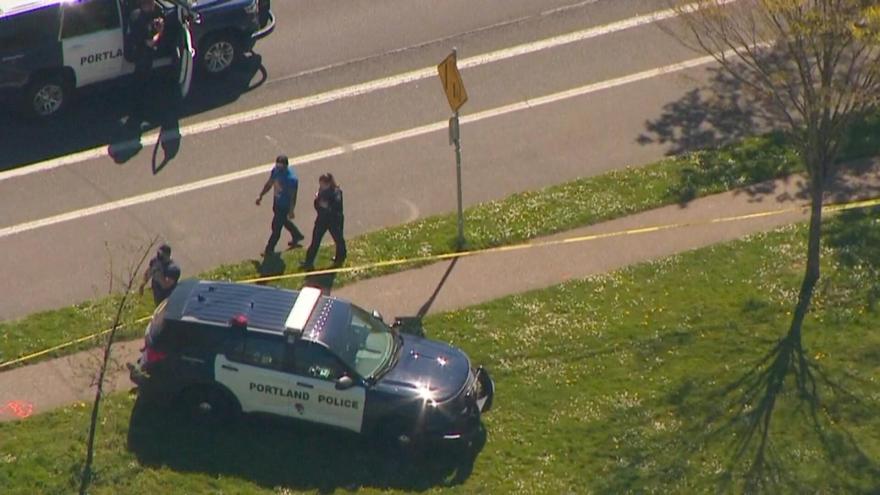 (CNN) -- Police in Portland, Oregon, said they used pepper spray and smoke canisters to break up a crowd that gathered on Friday as they investigated the fatal shooting of a suspect by police in Lents Park.

A suspect who has only been described as a White male was fatally shot Friday morning by an officer responding to a report that a man was pointing a gun in the park, the Portland Police Bureau (PPB) said in a news release.

The PPB says lethal force was used after "less lethal" rounds were attempted, the news release said. Officers provided emergency medical aid, but the suspect was pronounced deceased at the scene.

While the shooting was being investigated, a crowd gathered Friday and began yelling at officers, the PPB said.

"The hostile crowd estimated to be over 100 people tore down crime-scene police tape and encroached on the work area," the Portland Police Bureau said in a press release Friday evening.

Protesters hit officers with sticks and water bottles as they left the park, the PPB said.

According to the department, no chemical munitions were used against the crowd, but they did employ a "Rubber Ball Distraction Device."

No officers were injured, and at the time no arrests were made.

As the evening continued, a riot was declared by police and several protesters were arrested, as the PPB said individuals were seen participating in "criminal activity" and breaking windows.

"Participants in the riot have been seen attempting to burglarize businesses," the PPB said as officials warned those participating to leave the area or face arrest. Police claim a "hostile crowd" was surrounding them at one point.

Portland Fire & Rescue was called to extinguish at least two fires that had been set along SW 4th Avenue, the police said.

Police on Saturday identified the officer who shot the suspect as Zachary Delong, an eight-year veteran of the force.

Delong will be placed on paid administrative leave until the investigation is completed by the police and the Multnomah County District Attorney's Office, police said.

As in cities across the country, protests erupted in Portland late last spring over the death of George Floyd at the hands of Minneapolis police and expanded to include demands for police accountability and prosecutorial reform in the cases of Breonna Taylor, Ahmaud Arbery, Elijah McClain and other Black victims.

Portland Mayor Ted Wheeler released a statement Friday encouraging everyone to "proceed with empathy and peace."

"These shootings always are traumatic for everyone involved and for our community, regardless of the circumstances. I want to offer my sympathy to the individual involved and to their family. My thoughts also are with the officers who were involved," Wheeler said.