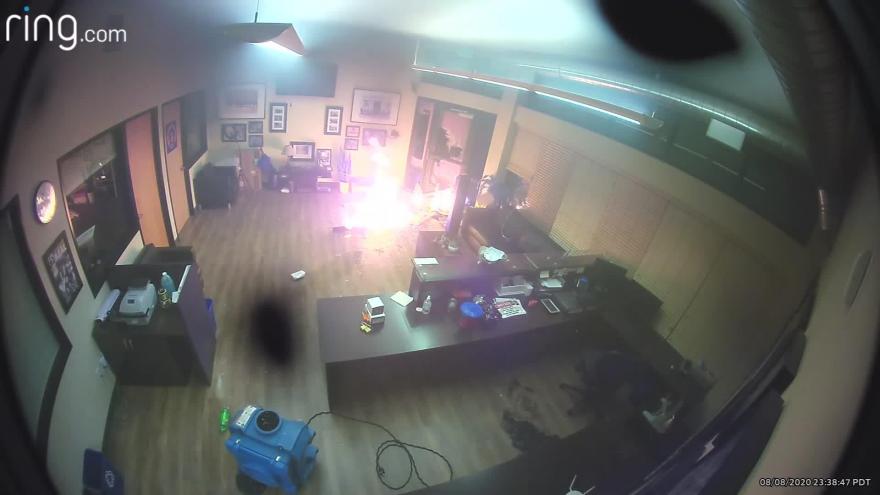 (CNN) -- Portland Police said a peaceful demonstration turned into a riot on Saturday night after a group of people broke into a Portland Police Association office and tried to start a fire.

Police said the protests, which have taken place nightly in the Oregon city for more than two months, were peaceful until about 10:30 p.m. (1:30 p.m. ET) when a group made its way to the Police Association.

"People within the crowd committed crimes when they erected a fence, pushed dumpsters into the street to block traffic, set a dumpster on fire, vandalized the PPA office with spray paint, and destroyed security cameras," Portland Police said in a statement.

Shortly after, protesters broke into the window of the office and started a fire, police said. Security video from inside the office shows unidentified people tossing flaming debris into the office to grow the flames.

Police said the people responsible committed "crimes of criminal mischief, burglary, and attempted arson." Police then declared a riot and ordered everyone to leave the area, including members of the press and legal observers.

When officers arrived to disperse the crowd, protesters threw "glass bottles and paint balloons at them," and pointed lasers into the eyes of police, police said. Three officers were injured, including two that were transported to the hospital and later released, police said.

Portland Fire and Rescue then put out the fire in the office.

"While officers were moving rioters they came upon areas of the street where rioters built barricades with street closure signs, picnic tables, and other types of material. Rioters on the other side of the barricade were hurling objects at officers," police said. "At that point, officers were able to get around the barricade and continue to push the rioters away from the closure area. About 300 rioters gathered at Kenton Park."

The area was mostly cleared by 2 a.m. local time, police said, and several arrests were made. Police confirmed they did not use tear gas in the incident.

The protests, originally spurred by the police killing of George Floyd in Minneapolis, have continued for more than two months in the liberal northwest city.

Two weeks ago, the Trump administration reached an agreement with Oregon's Democratic governor to withdraw federal officers from downtown Portland, though the Department of Homeland Security said it will maintain a presence in the city until it believes federal locations there are secure.