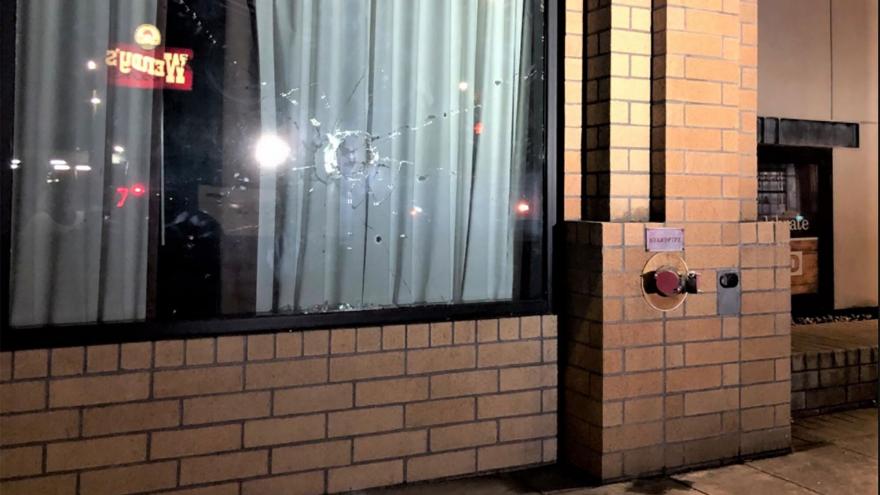 Windows were broken out of multiple businesses during marches in Portland, Oregon, on Saturday night, Oct. 31.

According to police, members of the group threw objects at police and pepper sprayed members of the community. Police say they also shattered windows at several businesses, including two phone stores, a coffee shop, a computer store, a community bank, a hotel, a restaurant, a financial office and two realty offices.

Aerial video shot by CNN affiliate KPTV showed shattered windows in a computer retail store on NE Multnomah St, a coffee shop and at least one other business.

After declaring the riot, police ordered everyone to leave the area and threatened arrest, citation, or the use of crowd control agents if the crowd did not disperse immediately. Around 8:30 p.m. PT, police rescinded the riot declaration after most of the rioters left, the release said.

No one was arrested, but the Portland Police Bureau said they are investigating the vandalism and future arrests were possible.

Portland has been the site of regular protests against police brutality and racial injustice since Minneapolis police killed George Floyd in May.

The demonstrations found renewed intensity after Kenosha, Wisconsin, police shot Jacob Blake in August and again after the announcement in September that only one of six Louisville, Kentucky, police officers would be charged in connection to Breonna Taylor's fatal shooting, but not for the killing itself.