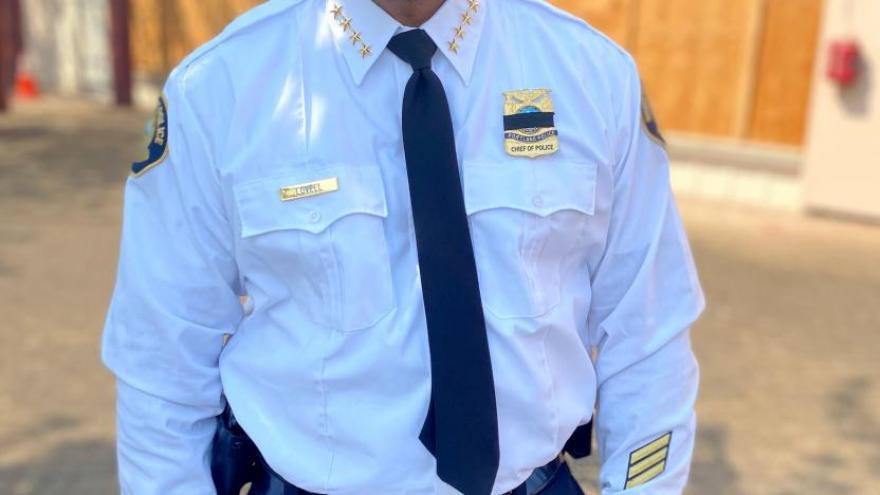 (CNN) -- Chuck Lovell was sworn in as Portland's police chief in June 2020, not long into the pandemic and just a couple of chaos-filled weeks after George Floyd was murdered by a Minnesota police officer.

As in cities across the country, protests erupted in Portland over Floyd's death and expanded to include demands for police accountability and prosecutorial reform in cases involving Black victims.

The events ranged from peaceful Black Lives Matter marches to violent riots including arson and vandalism. Some became a target for hate groups seeking to antagonize those who came out to defend the rights of marginalized communities.

"It's been challenging coming in during the pandemic, but also during such a time of tumultuous activity in the city, and the cries for reform," Lovell told CNN.

Portland City Commissioner Mingus Mapps echoes that the city got "caught up in a racial reconciliation" last year.

"We had folks out on the streets for eight months straight, really demanding police reform," Mapps told CNN. "And frankly a lot of that was really good."

He says that positive results of the city's prolonged period of social unrest have been additional investment in violence protection to try to divert young kids at risk from "lives of gang violence," and a push for real, deep-rooted changes in the culture between the community and the police.

"We're trying to stand up a new system of independent, citizen led oversight of our Police Bureau, so that people trust that when cops come out and do their work and something goes wrong, they will be held accountable," Mapps told CNN.

But Mapp cautions that when some of the peaceful protests pushing for real social change evolved into ugly riots, there was danger at their door.

"We had many peace officers who spent night after night trying to manage a riot. And that was exhausting," he said.

'A stunning amount of gun violence'

Like so many large cities across the United States, Portland is currently engulfed in fighting a second pandemic on top of Covid-19.

"In the last year we have seen a stunning amount of gun violence," Mapps told CNN.

"Gang violence has caught fire like a wildfire. And now we are in a dysfunctional cycle of potentially revenge shootings," he said.

Lovell agrees that some of the reform from 2020's sustained protests had a positive impact on their policing. But he says many of those positives are now overshadowed by the fallout, which he says is partly to blame for a significant officer shortage that continues to plague them.

He wrote in last year's opening letter in Portland Police Bureau's Annual Report that the force no longer has the "ability to provide service to our community in the ways in which they continue to ask for."

The chief has been with Portland's Police Department for 19 years, and says he has never seen challenges like this.

"It's at a tipping point," Lovell told CNN.

Portland already has over 60 homicides in 2021, on pace to shatter the highest number of homicides the city has ever had in a single year. There have been over 900 shootings so far this year, injuring over 280 people, more than double the number of shooting incidents Portland had the same time last year.

"When you take a look at who was actually getting shot, it varies by the day and the week but two-thirds of those victims are people of color," Mapps told CNN.

Portland had 94 homicides during that recent 13-month period, according to data from the Portland Police Bureau. And 39 of those killed were Black, which makes up for 41.9% of the victims, even though the city is just 5.8% Black or African American alone according to the most recent U.S Census.

Lovell says that he can't pinpoint one reason that is responsible for the outbreak of senseless violence, but he believes that gang activity plays a major part in it, as well as "a bunch of social media type beefs that erupt in shootings."

"We end up looking at that a lot because a lot of information gets passed there, and a lot of things get said, so that's definitely a part of it. And other chiefs I talk to throughout the country say the same thing too," Lovell told CNN.

"A lot of people have guns in Portland too; I think that is part of the issue as well," he said.

Lovell says his force now has less than 40 officers patrolling the streets each night, which he doesn't think is nearly enough to deal with the increased violence. During one weekend, his department had over 1,200 calls for help.

"We're still struggling with the pandemic," Lovell said. "Staffing issues really hurt us and the level of service we can provide. Call times have gone up and things of that nature. We've seen a lot of officers leave in the last year. When you cobble all those things together it makes for a really tough environment."

According to the Portland Police Bureau, the force has lost nearly 150 officers in the last 13 months. Lovell says his department is down to 793 officers, even though they are authorized to staff 916, and are consistently losing about three to four men and women a month to attrition. Next July another 88 officers become eligible to retire, and that worries him.

Mapps currently oversees Portland's 911 system, and says that in his estimation the city is about 300 police officers short right now.

"In the last thirty years our population has essentially doubled, but the size of our Police Department has actually shrunk. So we have the same size police department today that we had in the 1990s," Mapps told CNN.

"At a time when policing has never been more difficult. I think that people who do that work never felt less valued, frankly," he said.

In February, Portland's mayor directed the police bureau to form the Enhanced Community Safety Team (ECST), an investigative team made up of three sergeants, 12 officers, and six detectives whose role is solely to respond to shootings.

Lovell told CNN that in addition to the ECST, they also have increased the size of their homicide unit. Portland's police department also plans to add an additional team to collaborate with the community in a "proactive role" to address gun violence, but Lovell says it's a challenge just to fill those positions.

"That's very challenging work and we've had trouble getting people to go do it because it's risky right now professionally and personally too," Lovell said. "And I think that people are a little weary to come back to that work because when we've done it here before people have labeled them like, 'oh that team's racist' or 'they're doing too many stops of black people' or things of that nature, and I think that's been really difficult for the officers," Lovell said.

The goal of the ECST is for the Portland Police Bureau to narrow the investigative focus on repeat shooters by taking them off the street sooner, and to leverage collaborations with other local law enforcement partners, such as the U.S Attorney's Office, FBI, ATF, and the Portland Office of Violence Prevention.

Portland's Office of Violence Prevention was launched in 2006 to find ways to attempt to attack the root problems in neighborhoods, beyond focusing on policing efforts. According to the city of Portland, the office was formed with the goal of "enjoining the community in problem solving" by coordinating with pro-social resource services and providing grant funding with non-profit groups like the Portland Opportunities Industrialization Center. The POIC has a community outreach team dedicated to trying to intervene with gun violence and connect with vulnerable youth before it's too late.

In response to the most recent wave of tragedy, the POIC launched their Public Safety Village initiative this summer with the goal of having a "direct" and "immediate" impact on the community. The village is a group of 11 grassroots, Black-led organizations led by individuals who have been involved or impacted by violence in the streets of Portland in the past.

"Our communities are hurting. You know our kids are dying. Our men are dying," Roy Moore, co-director of community outreach with the POIC, told CNN. "I have kids that were basketball players last year that are shooters this year."

Moore, 41, describes himself as a former gang member, survivor of gun violence, and a recovering addict who has turned his life around for the better. He says that he has made it his life purpose to try to help others write similar stories. Moore and his team are on call 24 hours, seven days a week to respond to shootings in real time, to try and de-escalate tension and prevent retaliation.

When a shooting happens, Moore will often arrive on the streets around the scene or at a hospital to attempt to meet with family members and friends of the victim.

"A lot of our work is trying to prevent it before it happens. That's hard. That's sometimes impossible," an emotional Moore said.

"When I talk to these kids, I try to explain to them that one day those ideologies will change. One day you value life, and you will appreciate taking this breath right instead of living for the moment. And, you know, being the hardest cat on the block don't really mean that much when you're 40 years old," Moore said. "We're fighting two pandemics."

Hiag Brown, co-director of community outreach with the POIC, says that he also made bad choices when he was younger that ended up negatively impacting the community, and ultimately led to him being sentenced to 57 months in federal prison. Brown, a wrestling and life coach, says that his top long-term solution for curbing Portland's violence is to develop more positive and affordable opportunities to keep youths occupied.

"A lot of those activities that kept us busy as kids. They don't have those anymore," Brown told CNN. "These kids, they have to have some type of release, and if they don't have that release, then they're getting built up that anger and that stress."

Lionel Irving identifies, as a Portland gang veteran who was rehabilitated while serving years in federal prison for manslaughter.

"I feel like the community as a whole has turned a blind eye to the front porch," he told CNN, visibly angry when discussing the topic of youth violence.

Irving, a life coach with POIC, is mad because he says the community is desensitized, and "too busy" waiting on politicians to make decisions as kids are being buried, instead of "getting outraged the same way it was protesting the police."

"We know in the third grade where a kid gonna go, it's a stat. We're not attacking third graders that's having problems," Irving said. "We wait till they get 16. And then we not even saying they got trauma until somebody like me say, 'Hey man, this guy traumatized,' and then we start talking about trauma."

Like her POIC colleagues, life coach Rosalee Anderson is dedicated to trying to connect with troubled youths to provide them the support that she didn't have. Anderson, who was convicted of felony drug trafficking for heroin?, also describes herself as a veteran gang member who is trying hard to break the vicious circle of elevated violence that has immersed her community.

"I was a child with a blank stare that was desensitized. I had already been there, been through that. So I tell my story, I tell them what I've been through," Anderson told CNN.

Anderson, a mother of four, echoes her colleague's beliefs that there isn't enough affordable activities available to keep many of these kids off the streets and out of trouble. Like Lovell and his Police Bureau, the POIC outreach team watches social media closely to try to get out ahead of "beefs."