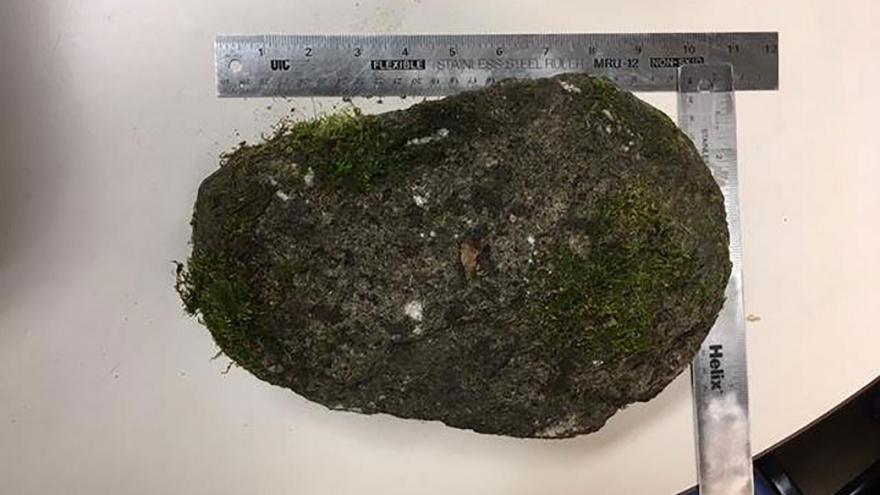 Portland police said this 9.5-pound rock was thrown at officers during overnight protests that began August 15, 2020.

The incident occurred on what CNN affiliate KOIN reported was the city's 79th consecutive night of protests in support of Black Lives Matter and against police brutality. According to a statement from the Portland Police Bureau (PPB), protesters threw objects at police, who at one point during the night deployed smoke in an effort to get the crowd to disperse.

"Portland Fire & Rescue treated two Portland Police members injured by rocks thrown by individuals in the crowd. Both of them went to the hospital for further treatment," the PPB statement said. Police said one rock weighed 9.5 pounds and was thrown by a person among a group of people with the word "press" on their clothes.

Tensions in Portland have been high amid the nationwide reckoning over race and policing sparked by the police killing of George Floyd. The situation in Portland was exacerbated in July by the presence of federal agents sent in by the Trump administration, purportedly to protect federal property.

While the Trump administration and Oregon's Democratic governor reached an agreement to withdraw federal officers late last month, protests -- and clashes between police and protesters -- have continued.

According to the PPB, protesters gathered Saturday night outside the Penumbra Kelly Building, a facility used by the Multnomah County Sheriff's Office.

The back-and-forth between police and protesters continued late into the night. Protesters threw rocks, frozen eggs and glass bottles, the PPB statement said, citing officers on the ground. Protesters also shone lasers at officers and trespassed onto the property, police said. In one case a security camera was spray painted.

Officers ordered protesters to disperse around midnight and began to make arrests. According to police, protesters -- some of whom hid among individuals with "press" written on their clothes -- continued to throw rocks and bottles at police and their vehicles.

It wasn't until around 3 a.m. when the crowd had dispersed. PPB said it would release details about arrests later Sunday.

Saturday evening's protests followed earlier clashes that afternoon between members of the far-right group Patriot Prayer and counter-protesters, KOIN reported, culminating in reports of at least two shots being fired.

KOIN reported that Patriot Prayer rallied in front of the Justice Center in downtown Portland. Some members told KOIN they were protesting against anti-fascists, commonly known as Antifa; others said they were rallying in support of police. According to KOIN, some attendees carried firearms.

The PPB did not name the groups involved in the conflict in a statement Saturday night, but said two groups had gathered by the Justice Center to demonstrate. "Over the course of two or more hours the groups sometimes argued and fought with each other."

The PPB statement said the groups "apparently used weapons against one another," like paintball guns, mace or bear repellent. At least one person was injured when they were hit in the face with a paintball.

At some point the groups confronted each other, PPB said. "During that confrontation a person allegedly fired a gun," the statement said.

"Anyone who was a victim of a crime is encouraged to call police to report the crime," it said.