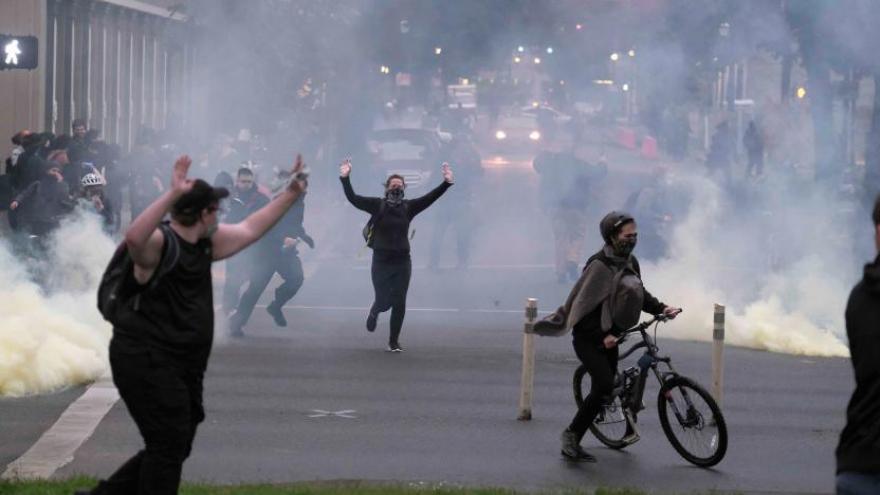 Police in Portland used tear gas and flash bangs on May 30 to disperse protesters. The city is the latest to suspend the use of tear gas on protesters.

(CNN) -- Police in Portland, Oregon, won't use tear gas to disperse crowds, becoming the latest city to order the tactical change amid the ongoing nationwide protests against police brutality.

Portland Mayor Ted Wheeler said Saturday he had directed the city's police chief to stop using tear gas "unless there is a serious and immediate threat to life safety, and there is no other viable alternative for dispersal."

"I stand in solidarity with our non-violent demonstrators, who are sending a strong message that we are long overdue for meaningful reform and restorative justice," Wheeler tweeted.

Earlier this week, the American Civil Liberties Union Oregon sent a letter to the state's mayors, city managers and police chiefs calling on them to ban the deployment of tear gas and flash bang devices into crowds.

"Using tear gas and other chemical weapons that attack respiratory systems, cause coughing and make it hard to breathe in response to protests about the longstanding racial injustices in our communities is excessive and morally repugnant," the letter said.

A group of more than 1,200 health and medical colleagues penned an open letter focusing on techniques to reduce harm to people protesting racial injustice and shared their concerns over the use of tear gas or smoke.

Portland is the latest city to move away from the police tactic since George Floyd's death prompted protests nationwide.

Seattle Police Chief Carmen Best announced Friday she suspended the department's use of tear gas for crowd management for at least 30 days.

"And during that time the Seattle PD SWAT team will maintain their trained ability to use CS (chlorobenzylidenemalononitrile) to protect life and to end standoff situations. Any deployment must be approved by the chief" or whoever the chief has designated, Best told reporters.

In Denver, a US District Court Judge granted a temporary restraining order prohibiting the use of "chemical weapons or projectiles of any kind" against peaceful protesters.

The order applies to the City and County of Denver, and specifically the Denver Police Department and those assisting the department.

The ruling came after four Denver residents who participated in demonstrations following the death of George Floyd filed a complaint Thursday challenging the police department's use of chemical agents and rubber projectiles during protests.