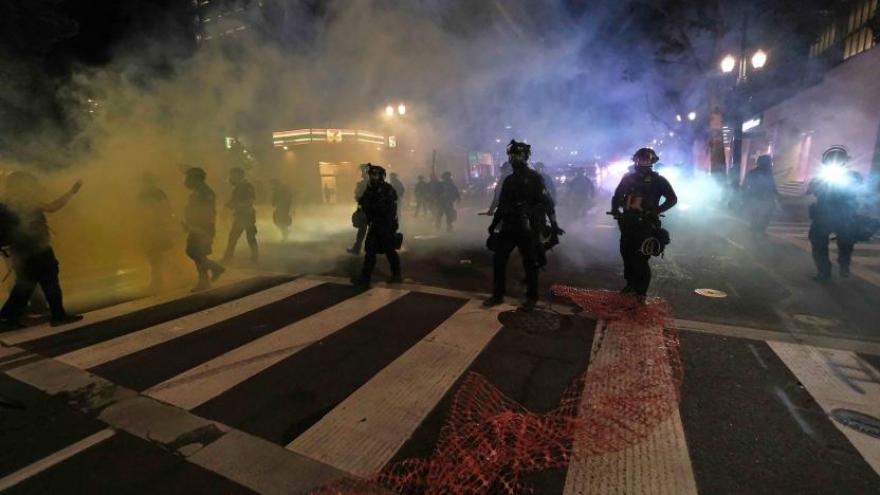 Several officers were injured by fireworks that exploded on or near them, police say.

(CNN) -- During demonstrations in downtown Portland, Oregon, protesters blocked traffic on Main Street and launched fireworks from the street, injuring officers, the Portland Police Bureau said in a Sunday statement.

The Saturday police protests began peacefully, police said, with people gathering in two public plazas to watch and listen to performers, but some in the group began launching fireworks on Southwest Main Street, the statement said.

"During this time, a man carrying a rifle was seen in the area," police said. "Several demonstrators surrounded him but left him alone, and eventually he left."

Protesters burned an American flag they hung from the Multnomah County Justice Center, a government building mostly used by police, the statement said. Many demonstrators carried shields, it said.

The crowd also blocked traffic and launched "commercial-grade fireworks" toward the justice center and at the nearby federal courthouse, police said. The protesters ignored warnings from the actual police sound truck urging them to stop shooting fireworks at the buildings, they said.

After protesters' projectiles broke windows in the courthouse building, police declared the protest a riot around 11 p.m. and deployed tear gas and "crowd-control munitions."

As officers worked to disperse the crowd, police said, protesters threw bricks, firework mortars, smaller firecrackers and "other flammables" toward them, police said.

Protesters made their way back to the area around 1 a.m. Sunday and started a bonfire in the middle of Southwest Third Avenue and Southwest Main Street, police said.

The fireworks injured several officers when they exploded on or near them, the statement said.

"This is the second time in a day a riot was declared in downtown Portland due to the activities of many that put others' lives at risk; this is unacceptable," Portland police Chief Chuck Lovell said. "Our officers are tired, but they are resilient. They will continue to be available every night to protect our community members as they swore an oath to do."

The crowd began thinning about 4:30 a.m. Police arrested more than 12 people, they said. Authorities will release the names and details later, they said.

"Officers made several arrests, including one ... where a male fought with officers. Officers were able to get him in custody and recovered an illegally possessed loaded firearm and a knife," the police statement said.

The police bureau was able to handle only emergency calls in the city for several hours because so much of the force was deployed to assist with the riot, the statement said.

"The violence we have witnessed is contrary to the values of our city and the thousands who are hoping to move forward with systemic change," Lovell said. "Our community deserves better than nightly criminal activity that destroys the value and fabric of our community."