Portland braces for its 100th night of protests 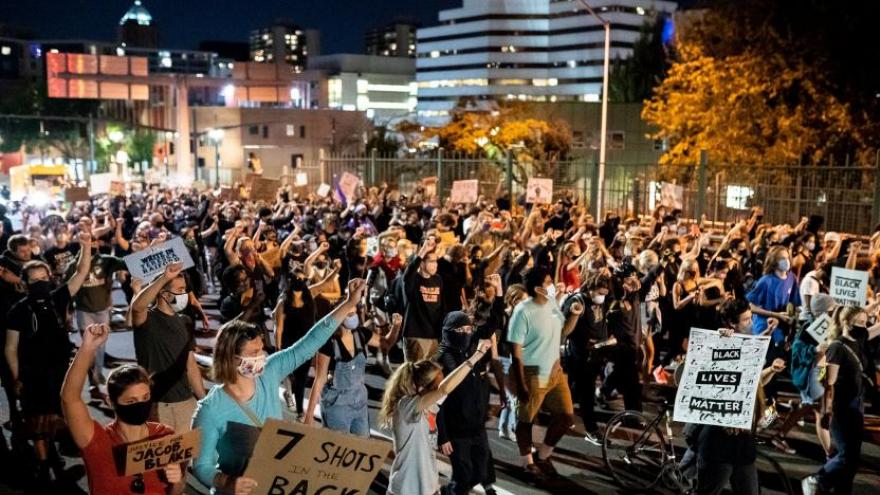 Portland protesters march after the killing of Jacob Blake in Wisconsin last month.

(CNN) -- Portland, Oregon, the epicenter of recent demonstrations against police brutality and systemic racism, heads towards its 100th straight night of protests Saturday.

In just the last week:

Police said Friday's protest march started about 9:45 p.m. local time, with some people in helmets, gas masks and armored clothing. They arrived at the Portland Police Association, many chanting, "Burn it down," police said.

Shortly before midnight, police announced over a loudspeaker, "This has been declared an unlawful assembly. All persons immediately leave the area. Failure to adhere to this order may subject you too arrest, citation or the use of crowd control agents including but not limited to tear gas and, or impact weapons."

Video from the scene, shot by CNN affiliate KPTV, showed officers in tactical gear moving into the streets to disperse crowds. Around midnight, officers could be seen handcuffing someone on the ground and appearing to make arrests.

Police said most of the people arrested were charged with interfering with a police officer and disorderly conduct.

Months of protests have led to damaged buildings, injured police and protesters, and the arrests of hundreds.

Portland officials have been calling for an end to the protests.

Police Chief Chuck Lovell said this week that gun violence is up and some 911 calls are going unanswered.

New York Times reporter Mike Baker has been on the ground in Portland and told CNN's Chris Cuomo Monday that where there were once thousands of protesters in the city, this week has now seen about 150.

The protests against police brutality and racial injustice began after the death of George Floyd in Minneapolis while police custody in late May. They picked up steam after Wisconsin police shot Jacob Blake. Then last Saturday night, amid the clash between protesters and Trump supporters, came the fatal shooting of Aaron Danielson.